‘Show of Hands’ An Opportunity for Local Projects

It is an opportunity gain funding for a great idea that’s only been brain floating since that initial epiphany, and the director of ReInvent Wheeling is hopeful more Wheeling residents will apply to participate in the next “Show of Hands” event set for mid-February.

Jake Dougherty is currently planning and accepting applications for the next event scheduled for Feb. 12 at the Capitol Ballroom in downtown Wheeling. “Show of Hands” is sponsored by Orrick, Herrington & Sutcliffe, and the winning presenter receives $1,000 – plus the collected cash from those who paid $5 to attend – to go toward their pitched idea.

The doors will open at 5:30 p.m., and the event will begin at 6 p.m. Appetizers will be supplied by Quaker Steak & Lube, and several different beverages will be available as well.

“All of the winning projects have experienced success already,” Dougherty said. “All of them have been able to take the funds won at Show of Hands and apply them very quickly. It may not seem like a ton of funds, but any amount of money will prove beneficial.

“Those who apply to participate can present an idea that is a for-profit venture, or it can be a non-profit venture. But there have been presenters with ideas that really didn’t fit in either category,” he said. “So it really depends on the idea. As long as there is a benefit to the downtown area or the surrounding areas, it would great to apply.”

Applications are due by 11:59 p.m. on Wednesday, Jan. 28. The form is available at www.downtownwheeling.com/showofhands. 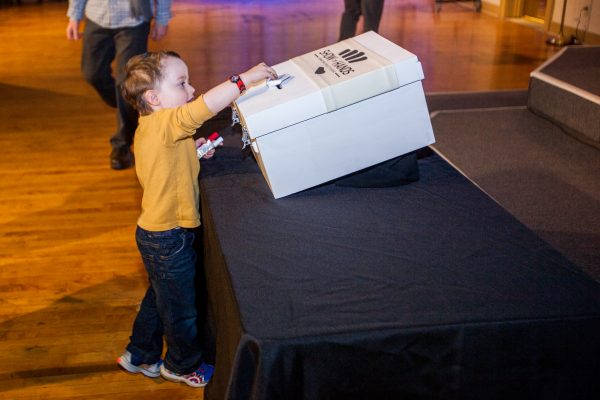 A young Wheeling child, Louis McKinley, assisted his parents, Bennett and Katy, when the time arrived for the audience members to vote for their favorite presented project.

“We have several applications right now, but we always want more before the selection process begins,” he said. “We have held three ‘Show of Hands’ events so far, and it seems as if many people wait until the last week.

“We are very confident that there are so many great ideas in our community, and that’s why we are encouraging everyone with those ideas to apply. We want to see them present at ‘Show of Hands,” Dougherty said. “There are a lot of roadblocks in the way of a lot of great ideas, and funding is usually No. 1 on the list.”

Dougherty explained that there is a selection committee that reviews all of the received applications in an effort to narrow the presenters to four individuals. During the event, presenters will be allotted four minutes to explain their projects, and then each participant will be asked four questions by members of the audience.

“This event represents an opportunity to do what is it is you want to do. We know there are projects out there, and we know we have so many great organizations in our community,” he said. “Sometimes to make a project real, you need that first check, and the same can be said about presenting. When you present, whether you win or not, it still makes the project more real than just a project floating around in your head.

“What is awesome about the event is that crowd is full of people who are ready to support these projects because they want to see continued progress,” explained Dougherty. “The main reaction I’ve received from those who have attended is that it’s great to see so many projects in motion in Wheeling.” 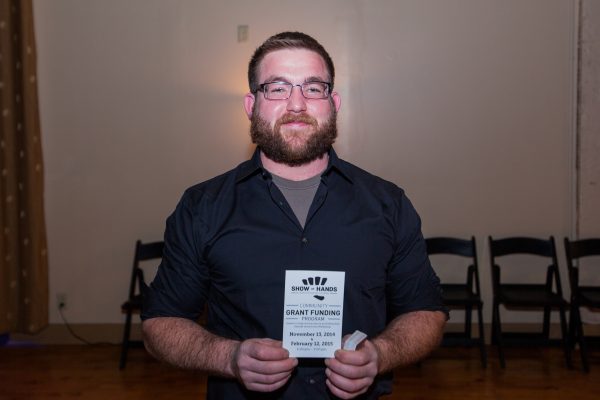 Woodworker D.J. Shalvey captured the victory after the last “Show of Hands” event. Thanks to Orrick, D.J. walked away with more than $1,000 and was able to make much-needed improvements to his workshop.

“The people who have attended believe it’s a very positive thing that there are so many different people, businesses, and organizations that want to make this city the world class city is can be in the future,” he said. “If someone presents a great idea and they win the funds donated by Orrick, there’s also that chance that they may attract even more from an individual who decided to attend.”

Photographer Bennett McKinley and Vagabond Kitchen owner Matt Welsch both participated in the initial “Show of Hands” event, and thanks to the generosity of Orrick they too took home a $1,000 prize.

“‘Show of Hands’ was an amazing opportunity to get community support at a crucial time in the Kitchen’s development,” Welsch said. “The financial support from Orrick was, of course, greatly appreciated. They have been an amazing part of our community with both in their wonderful treatment of the old Stamping Works Building and in their participation in community events.

“Even more so the Wheeling community bore us up and sustained us through an intensely stressful and challenging period,” he continued. ‘“Show of Hands’ is the perfect example of the energy in Wheeling these days and evidences what we can actually accomplish when we put our efforts together.”

McKinley admitted to being nervous before he presented his, “Meet Me in the Alley” art project to the judges and audience, but he said the tense moments were well worth the experience.

“To see the amazing support of the community generated towards wonderful projects that will benefit the city is a truly wonderful thing,” he said. “I was fortunate enough to be a presenter, and it was an awesome thing. It was nerve-wracking to prepare for it, but there was a sense of excitement that no matter who won, I would benefit by having one of these amazing projects in the city.”

Dougherty said the quarterly “Show of Hands” events is just one of several ways ReInvent Wheeling is partnering with the Wheeling community to instigate locally based economic growth.

“To see the numbers of people who are choosing to get involved is really exciting,” Dougherty said. “And if someone really gets into the mix, they will come to know so much more because they will get to know some of the folks who have already made a lot of things happen.

“The people in the audience will have the opportunity to vote for their favorite idea after the four presentations and after all of the questions have been asked, and those audience members are our neighbors, so that makes it very unique,” he said. “And that is why we are encouraging as many people as possible to get their application in. This is a community event that hopefully will lead to another new project that will make Wheeling even better than what it is already.” 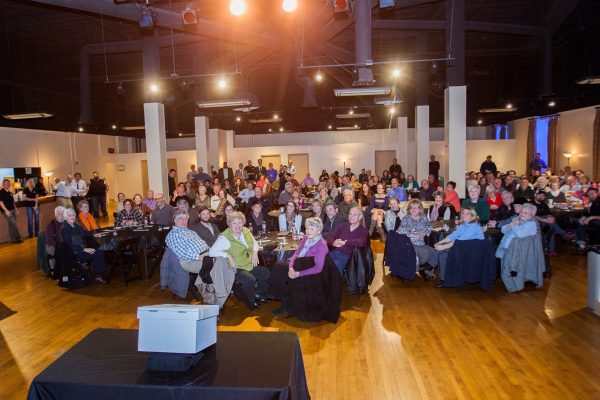