‘Show Of Hands’ Returns This Evening

The summer break for “Show of Hands” may have been extended by a month, but officials with ReInvent Wheeling are prepared for the event’s return this evening at the Wheeling Artisan Center in the downtown district.

“Show of Hands” is a crowdfunding event that will enter its third season with four presenters from the Wheeling area interested in expanding their businesses or non-profit organizations.  The doors will open at 5:30 p.m., and the event will get under way at 6 p.m. with local musician R.J. Gaudio performing.

According to Jake Dougherty, executive director of Wheeling Heritage, the participants will include The Bridge and Tunnel Collective, The Children’s Museum of the Ohio Valley, Undependent Films, and Russell Nesbitt Services, Inc.

“We are very excited about bringing back ‘Show of Hands,’ and we feel we have four great projects that those attending will hear about, and the attendees will also have the chance to ask what questions they may have,” Dougherty said. “I know it’s been a little longer break than we have had before, but we are back, and we believe it’s going to be a really strong show. 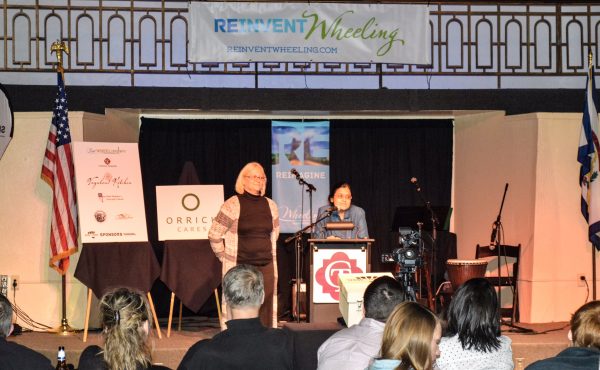 Lori Jones and Rita Gupta were the presenters for the YWCA.

“We have made a few changes like the new location on the third floor of the Wheeling Artisan Center, and there also will be a few slight changes as far as how the program runs,” he continued. “We also have some new sponsors on board thanks to our ‘Friends of Show of Hands’ members, but the one part of it that will stay consistent is the support from Orrick. They have been with us from the very beginning, and that has meant everything to us. The people at Orrick are the reasons why ‘Show of Hands’ started and why it continues.”

Dougherty explained each of the four projects that have been selected for the third season’s initial “Show of Hands” event.

The Bridge and Tunnel Collective – “This is a group of local musicians that are working to grow the music scene here in the Wheeling area,” Dougherty said. “They look at themselves as a virtual venue, and they promote all of the bands that are performing here locally to achieve that goal.

“What they really are looking for by participating with ‘Show of Hands’ is to increase their ability to promote what they are doing so they can attract more people to attend the shows,” he continued. “They also are now in charge of the Third Friday performances at Artworks Around Town at Centre Market, and they are bringing in local performers as well as those from the general region.” 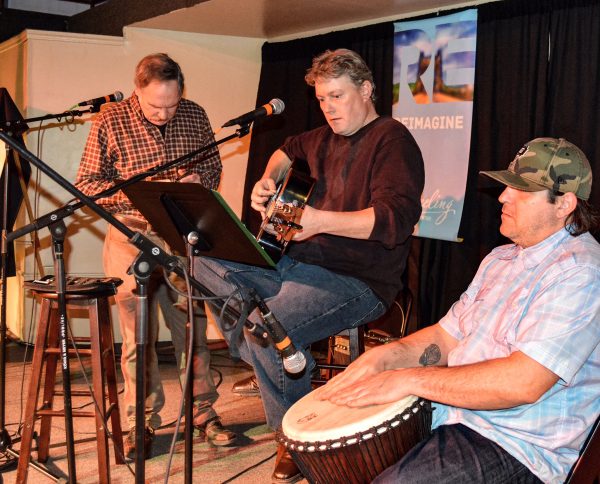 The Children’s Museum of the Ohio Valley – “This is all about this organization’s ‘Girls Who Code’ program, and it will be either on weekends or after school that will allow these young ladies to be introduced to programming and web-page coding because there is a gap between males and females in the coding industry,” Dougherty explained. “The percentage of females working in that industry is incredibly small, and that is what this program will address.

“The ‘Girls Who Code’ program is a great effort to close that gap, at least for the ladies in this area, and it is believed that starting early in a child’s life is the best way to go about it,” he said. “The ages this program wishes to attract would be females between the ages of 12 and 17, and basic coding skills is what they will learn during the workshops.”

Undependent Films – “This is a group of local filmmakers, actors, directors, cinematographers, and film editors that has been making short films and music videos,” Dougherty said. “These folks have been making films in Wheeling and the Ohio Valley area for some time, and they have continued to grow. 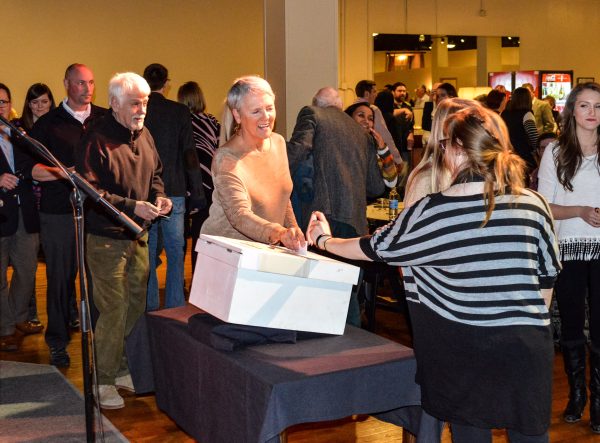 Local advocate Susan Hogan made sure to cast her vote for the presenters for whom she was rooting.

“They experienced a lot of success with the premiere of their most recent film, ‘Need or Greed,’ and now they have realized that they are in need of some additional lighting and sound equipment,” he continued. “That is why they have decided to participate in ‘Show of Hands’ this evening.”

Russell Nesbitt Services, Inc. – “The greenhouse operation is a new operation for this organization as they continue making efforts to train their consumers for solid employment, and the goal is to create a greenhouse where those folks will be able to learn how to work in that setting.

“It would be a training facility with flowers, fruits and vegetables, and then Russell Nesbitt would be able to use those products to add to their sustainability model,” he explained. “The facility would be located at the WATCH facility in Centre Market, and that is the site of a lot of work and a lot of training already.”

Each of the four participants is offered four minutes to present a business or project, and following the pitches, each participant will field four questions from audience members. At the end the audience members are asked to vote for their favorite presentation. The one that collects the most votes wins the prize money. 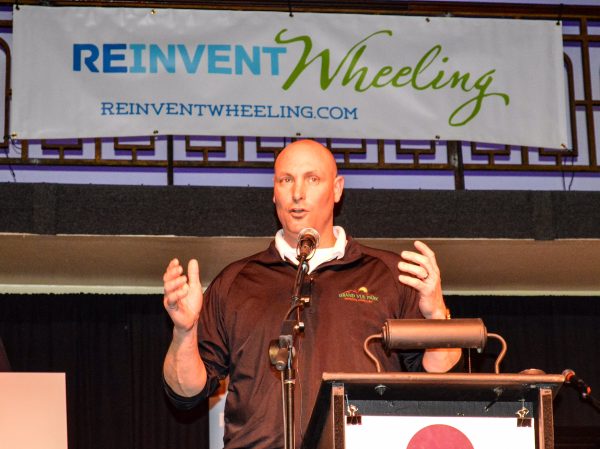 Those who attend are asked for a $5 donation that adds to the amount won by the presenter receiving the most votes. People who wish to donate $10 will be offered a couple of minutes at the microphone to promote a business, event, or a project of their own. The appetizers will be prepared and provided by River City Restaurant.

“We are very excited about this evening and for all of the scheduled events for next year, and it is good to have it back,” Dougherty said. “We have worked very hard to prepare for the return, and it is our hope that all of our supporters from the first two seasons come out, hear about four really great projects, and participate with selecting the one they would to make a reality.”