I was minding my own business and simply buying some Braunschweiger like my Grandma Novotney used to feed me, and out of nowhere my friend Dave suddenly asked, “What organization do you think could use some bikes to give to parents who need some help this Christmas?”

I immediately answered, “Oh, Dave, there are so many.”

We continued discussing his idea for a few minutes, and we settled on the annual toy drive conducted by Big Brothers/Big Sisters of the Ohio Valley. I told him the older kids can’t be forgotten as they so often are, and he said fine. In fact, the annual donation forgotten the past two years has been six bicycles: two for a little boy and girl; two for a boy and girl between the ages of 8-11; and a pair for teen-agers of both genders.

And then we chose our roles in this charitable endeavor. I suggested we split the cost of the bikes, and he said no. Dave said he and his wife would buy them, my son, Michael, would build them, and I would deliver them.

“Fine,” I conceded. I’ve learned during the years of our friendship that when Dave makes up his mind, it seldom changes.

But I planned this year not to include my friend in this year’s effort. I thought he and his wife wouldn’t have the time or the cash after this past year. They’ve been busy. They’ve given their time, precious store space, and donation after donation to the “Hope for Hines” movement, and that’s because since the day after last Christmas, their nephew Hines has been battling Stage IV Neuroblastoma.

My friend Dave’s last name is Rotriga, too.

But this past Sunday, there he was. And the bikes were already constructed! One by one, he unloaded them off his Miklas Meat Market pickup, and every time he asked, “You think these are OK for the kids, right?”

When I explained to Dave why I wasn’t going to contact him this year, he turned to me, looked me, in the eyes and said, “That doesn’t mean these six kids don’t need a present Christmas morning, does it?”

He left me speechless by making such a selfless, caring statement.

Shannon Kemp-Watson arrived to my house this week to wheel the six bicycles down to the Big Brothers/Big Sisters office on 14th Street in East Wheeling. She said, “I am so grateful you do this every year for the children in our program,” and I proudly explained to her that I have done nothing but pick up a telephone and dial her digits.

It was all Dave and Laura Rotriga, two of the most generous folks I’ve come to know.

And I thought you should know that, too. 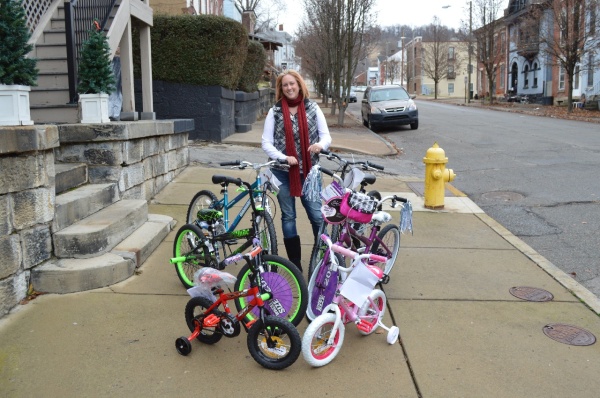 Shannon Hemp-Watson, the executive director of Big Brothers/Big Sisters of the Ohio Valley, collects the six bikes donated for a third consecutive year by Dave and Laura Rotriga, owners of Miklas Meat Market on the corner of Edgington Lane and Carmel Road in Wheeling.