For a sixth year in a row the Friendly City’s firefighters are orchestrating a T-shirt sale in an effort to raise funds during Breast Cancer Awareness Month.

The collected dollars, according to Local 12 treasurer Dave Harmon, have been distributed locally to assist the area’s females with the costs associated with mammogram screenings, and during the first five years the first responders have raised and contributed just over $50,000.

“We were in a meeting one day, and someone brought up the fact that other fire departments around the country started raising money for breast cancer awareness,” Harmon explained. “We’ve all been touch by cancer in some way, and it sounded like a great idea so we could help make a difference here in our community. That’s when we decided to move forward with it.

“At first we ordered 500 T-shirts, and we were immediately overwhelmed. There was more of a demand than we expected, to be honest,” the firefighter continued. “But Chief (Larry) Helms has been great about it, and so has the city manager (Bob Herron). Those two could not be more supportive to this effort, and that has meant a lot to us.” 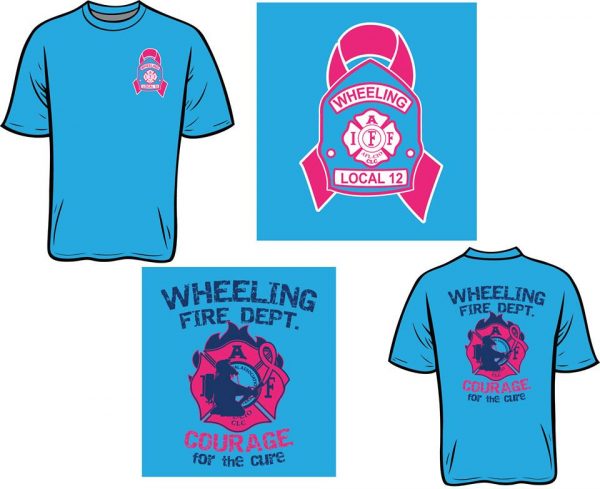 The firefighters added a new color beginning last year and the blue shirts are available once again.

This year the T-shirts are available in two colors and can be purchased at each of the city’s seven fire stations. The shirts are $12 each in sizes small to extra-large and for sizes above XL there is an additional charge of $2. Hoodies and long sleeve T-shirts also are available and can be ordered by contacting the Headquarters in the Center Wheeling area.

“The first few years we only had the pink T-shirts, but then some people expressed their wish for a variety, and that’s when we decided to offer the shirts in two different colors,” Harmon said. “We’ve had the two colors now for two years, and it seems as if a lot of people are very interested in the blue ones because they have already purchased the pink ones.

“When I saw the Chief (Monday), he was wearing one of his T-shirts, and a lot of guys are wearing them while we’re on duty in order to remind our local residents of our efforts,” Harmon explained. “It’s all about selling the shirts so our contributions can be as large as possible, and wearing the shirts on duty has really helped.”

The monies collected during this year’s T-shirt drive will be contributed to the non-profit organization, Ohio Valley Breast Cancer Awareness, and a percentage of what is raised will also be used to create a fund to assist the families of two firefighters currently battling a form of cancer. 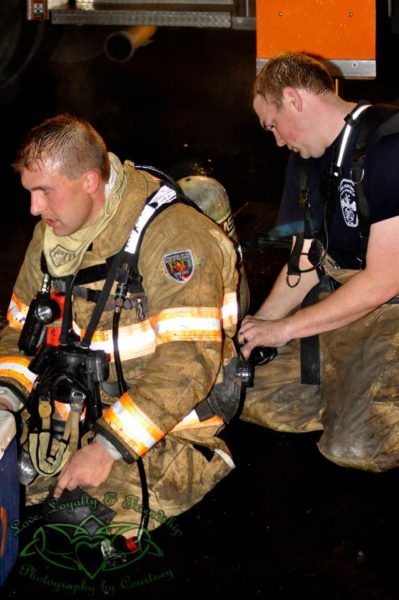 Harmon (on left) has been a Wheeling firefighter for 20 years.

Harmon, who has served the city of Wheeling for more than two decades and has been stationed in Center Wheeling since 2000, said the T-shirt drive will continue in the years to come.

“I’m confident that we will keep the T-shirt drive going each October, and that’s because of the support I’ve received from the other firefighters,” he said. “Everyone does something to help, and we’re very organized now that we have done this the past five years.”

Allowing the firefighters to don the garments was a “no-brainer,” said Chief Helms, who is continuing his recovery after suffering a shattered pelvis when a motorist struck him and his wife while they were riding their motorcycle in mid-July. 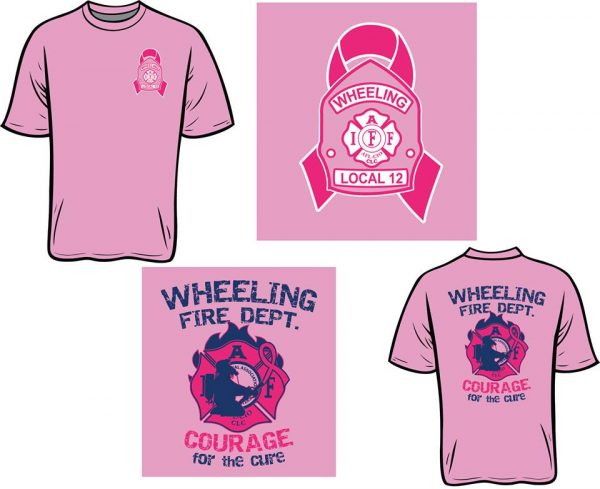 Since 2011, Wheeling’s firefighters have raised a little more than $50,000 during Breast Cancer Awareness month.

Helms returned to part-time duty a few weeks ago, and he has been in his office each day for the past two weeks. Right now the fire chief is using a cane while walking, and his wife, Peggy, is recovering on schedule, as well, after suffering several fractures in the accident at the intersection of U.S. and Ohio Route 331. Both the fire chief and his wife were wearing helmets at the time.

“The T-shirt drive during Breast Cancer Awareness Month has become a tradition now since they have been selling them for several years now,” the fire chief said. “I think it’s a great way for them to show their support to our community, and they are really very charitable during the entire year.

“I doubt I know a family that hasn’t been affected by cancer. We all know someone, and that’s why the community support our firefighters have received at this time of year is proof of that. We have people who order them early and others who ask about them all year long. The same people buy them each year, and every October we see new people coming to the stations, too. It’s a great thing to see, and I’m very happy I could make it back in time to be able to see it again.”