Pat’s Down on Main Street is continuing its Sundae series with ezra & the reletivs along with special guests Poetic Peth and Buffalo Rose. This free show runs from 6-9 p.m. Sunday, April 29.

ezra & the reletivs is a four-piece melodic urban alternative group based in Wheeling. Following the studio efforts of Ezra Hamilton and David Tangamo in summer of 2017, Luke Daller and Logan Seidler furthered the recording process with bass and drums. After a few successful sessions, The Reletivs were created. Their music has been described as a captivating experience that transports listeners through the beauty and pain of love, life and relationships.

Hamilton has shared the stage with some of the music industry’s brightest such as Gavin DeGraw, Boyd Tinsley of Dave Matthews Band, members of Daughtry and Robert Randolph. He has also recorded with musical greats such as the Grammy Award-winning Tedeschi Trucks Band member Kofi Burbridge. Ezra’s voice is as rich as it is smooth and beckons listeners to the outer reaches of every emotion of the human soul. 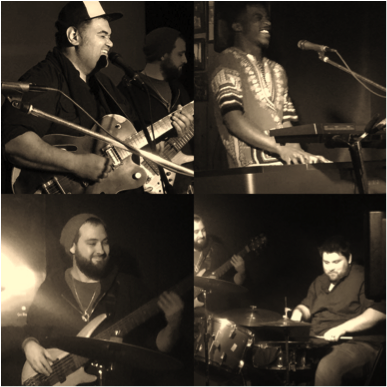 Tangamo is from the Democratic Republic of Congo where he learned to play piano, bass and drums. He has performed with notorious gospel musicians from his home country. He has been playing in Wheeling with various musicians for the past five years.

Daller is a Pittsburgh native with a musical family. He has played bass guitar for over 13 years. With roots in classic rock and funk, he has shared stages with or opened for reputable musicians including Greg Allman, Lotus, Nicki Minaj/Meek Hill, Damien Escobar, Billy Martin and many others.

Seidler was born and raised in Wheeling. He studied music and dance in Ghana, West Africa, during the summers of 2012 and 2014. He has played drums with The Cherry Street Band who has sold out shows at 123 Pleasant Street in Morgantown.

Wheeling local phenom Josh “Poetic Peth” Pethtel has been involved in the Ohio Valley hip-hop scene for years. He has performed in multiple local venues with various rap and R&B artists such as Juelz Santana from VH-1’s “Love & Hip-Hop” and Ponce De’Leioun. He won Best New Artist, Lyricist of the Year and Best Album of the Year at the 2016 Ohio Valley Hip-Hop Musical Awards.

Buffalo Rose is a modern folk band from Pittsburgh with a penchant for harmony and an intense love of the natural world. The band’s lineup has snowballed from its inception in the spring of 2016 to include three vocalists (Mariko Reid, Lucy Clabby, and Shane McLaughlin) and four string instruments: guitar (Shane McLaughlin), dobro (Malcolm Inglis), bass (Jason Rafalak) and mandolin (Bryce Rabideau). They’ve shared the stage with a variety of national acts including The Infamous Stringdusters, The Dustbowl Revival, Yarn and Dangermuffin.

The show is set for 6-9 p.m. Sunday, April 29, at Pat’s Down on Main Street located at 422 Main St., Wheeling. No admission will be charged for this event. Stay up to date with ezra & the reletivs by following them on Instagram: real_reletivs and www.facebook.com/ezraandthereletivs.