A goal adopted by the Ohio County Commission a decade ago will finally be realized at The Highlands when a multi-purpose sports complex is constructed and opened to the public in late 2018 or early 2019.

Orphy Klempa, one of three Ohio County commissioners and a member of the Ohio County Development Authority, reported that the final design of the facility should be finished and released to the public by the end of the year. He also explained that the interior facility represents the first phase of several involving the sports complex at the development along Interstate 70.

“The project is moving forward very nicely in my opinion,” Klempa explained. “We are very close right now to seeing the final drawings, and that’s when we’ll really know what we should have in the future.

“It’s Phase One at this point, and that includes the structure that we plan to construct for the interior facilities, and the other phases will involve what we develop on the outside of the facility,” he continued. “We have decided to sell $30 million worth of bonds, and those dollars will cover Phase One. We’ve also decided not to include a hockey facility or a pool because of the expense of those two options.”

Along with the final design, the amount of square footage has not yet been determined, but Klempa is confident that athletes from a variety of different sports will find the facility useful. The locale of the complex will be between the rear of Marquee Cinemas and the Cabela’s Distribution Center. 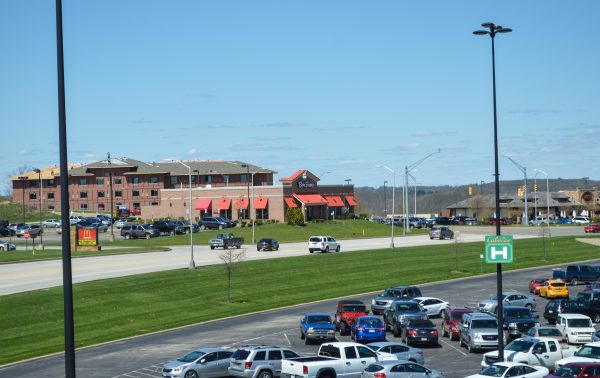 Traffic is expected to increase along Cabela’s Drive at The Highlands once a new, $30 million sports complex opens.

“Phase Two will involve the exterior fields, but no decisions have been finalized as far as what kind of fields they will be,” he continued. “The interior fields will be designed to be multi-purpose surfaces, it will be climate controlled, and there will be netting that can come down to separate areas so as many people as possible can use it. It’s going to be a sports complex like none other in this area.”

The commissioner said he expects construction of the sports complex will begin in the early spring and will employ members of local trades in the Wheeling area.

“I believe we’ll have a definite plan in place by the end of this year, and that means we’ll get this finalized pretty quickly,” Klempa said. “I know I am excited about it, and I have seen some preliminary drawings that have not been released to the public because we could end up with a structure that is completely different.

“As soon as the final renderings are provided, we plan to make those available to the public so they can see what the Commission and the Ohio County Development Authority have in mind,” the commissioner said. “As far as the preparations are concerned, we’re probably involved with the last 25 percent of that process. That allows me to believe we could see construction begin on the structure early in the spring.” 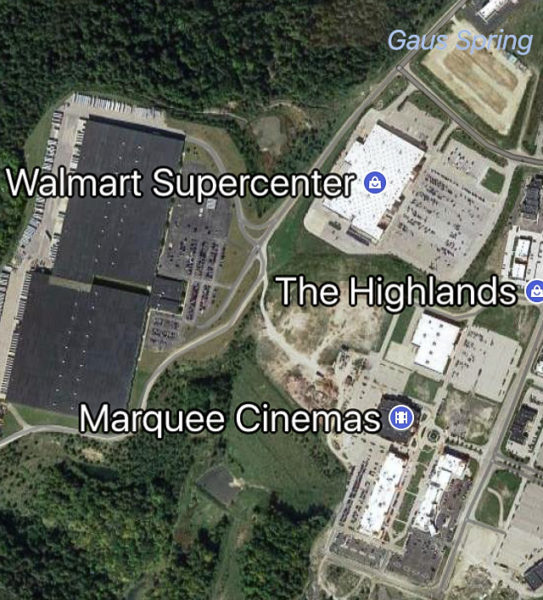 The new athletic facility will be located behind Marquee Cinema and adjacent to Walmart. (Image – Google Maps)

Fees to use the complex will be charged, Klempa said, but his goal is to make it as affordable as possible for local residents and for those traveling to The Highlands from outside the immediate area. Turning a profit, though, is not part of the plan.

“We are not constructing this complex with making money as the goal. My hope is that we simply break even and that people use the facility as often as possible,” Kempa explained. “My goal is to attract the people to The Highland for the additional commerce.

“If that happens then there will be more tax dollars available for expanding more to The Highlands and for improving the quality of life for the residents of Ohio County,” he continued. “While there will be fees charged to use the facility, our goal is to make them as low as we possibly can.”

The Highlands is a development that features several big-box and smaller retail stores, local and chain restaurants, hotels, a campus for West Liberty University, car dealerships, and light retail. Earthwork has taken place, too, for the impending construction of a Menard’s, a family-owned home improvement store that has more than 300 stores throughout the country.

“It’s my belief that such a facility will really enhance The Highlands, and we’re very hopeful that it will bring a lot of people from outside this area. I know how popular travel teams are now, and I don’t think that trend is going away anytime soon,” Klempa explained. “This project will put Ohio County on the cutting edge locally, and we’re excited about the residents of the county getting the opportunity to utilize it often. 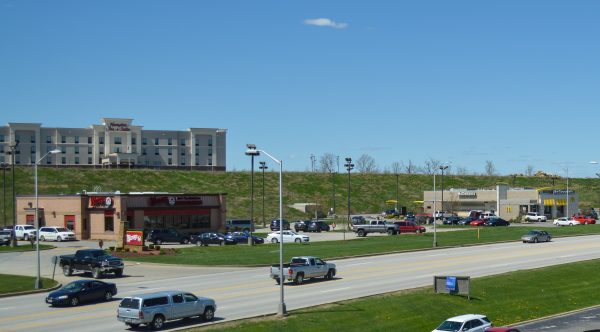 The Highlands features a number of chain and local eateries as well as lodging at a few different hotels.

“There was a conversation about such a facility before I joined the Ohio County Commission, but the plans were pushed back because of the economic crisis our country experienced close to a decade ago,” he said. “But now that the economy has rebounded, expanding The Highlands is once again a goal, and this facility will be a big part of that.”

Online shopping has had a negative impact on the retail industry, accounting for 25 percent of all sales in 2016, according to the First Data Corporation, but Klempa believes the new sports complex will assist with increasing commerce at The Highlands.

“It’s my hope that it draws more people to The Highlands so we can increase the amount of shopping that’s taking place there,” the commissioner said. “One of my fears is that the retail industry has been negatively impacted by online shopping. If that trend continues, developments like The Highlands will start going away, and no one wants that to happen anytime soon.

“This project is also about the jobs that will be created to build it and then manage it,” he continued. “It’s too early right now to be able to offer estimates, but I do know that we will have a lot of people working on the construction because this is going to quite a facility.”