Search
Home
Ideas
March rains and April showers bring ramps and morels before they bring May flowers. When we see those patches of green in the woods as we drive the country roads in mid to late April, we know that spring is just around the corner because the ramps are up, and the morels are not far behind. For many of us here in the Panhandle, collecting ramps and morels is a spring tradition.

When the spring sunshine warms the forest floor to around 50 degrees, the ramps begin to emerge. If moisture is plentiful, they grow very rapidly and are quickly to the green onion stage, which is ideal for the table. Since ramps usually provide the first patches of green on the forest floor, they are easy to find and harvest. They tend to grow in patches that can be quite large, so filling a grocery bag with those tasty goodies takes only a few minutes. 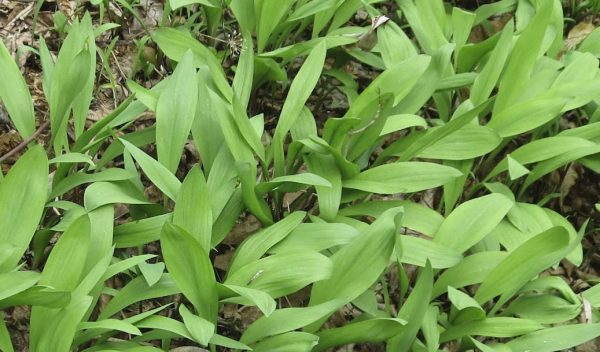 People often describe the flavor of ramps as being a cross between onions and garlic. However, ramps are actually wild leeks. The various West Virginia ramp festivals and celebrations bear testimony to the popularity of these flavorful woodland delicacies. Ramps are harvested while they are in the stage in which the bulb has just begun to swell. After peeling off the outer skin and trimming the roots just like preparing a green onion, they are ready to eat. Most ramp hunters carry a pocketknife for trimming the roots so that they can enjoy fresh ramps while they are still in the woods.

Although they are delicious raw, they are even more delicious when used in cooking. One of my favorite breakfasts is an omelet flavored with ramps and morels.

If you are a ramp lover, you know about the notorious odor that your body produces after consuming them. That oniony, garlicky odor is excreted from the body through perspiration in addition to coloring your breath no matter how many times you brush. If you think you are having a bad day, just think about what it is like to be a middle school teacher on a hot spring day in an unairconditioned classroom full of young, sweaty teenagers during ramp season. In spite of the aromatic downside, ramps are a springtime tradition here in the Mountain State. 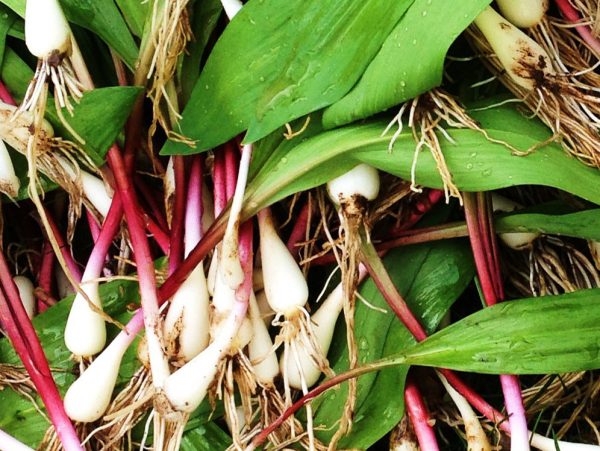 These ramps have the outer peeling removed.

A couple of weeks after the ramps appear, the morels also begin to appear. As children, we called morels sponge mushrooms, and we ventured into the woods every spring in a quest to find them. As a young boy, I asked my dad where to look for them and he replied, “Morels are like gold. They are where you find them.”

My wife also got advice from her dad about where to look for morels. He told her to look under the mayapples. However, we don’t think that we have ever found a morel under a mayapple. If you ask any successful morel hunter where he or she found them, they will tell you: “In the woods.” Morel hunters do not share their secret hunting areas. However, you can improve your chances of success by understanding a little about the biology of the morels. 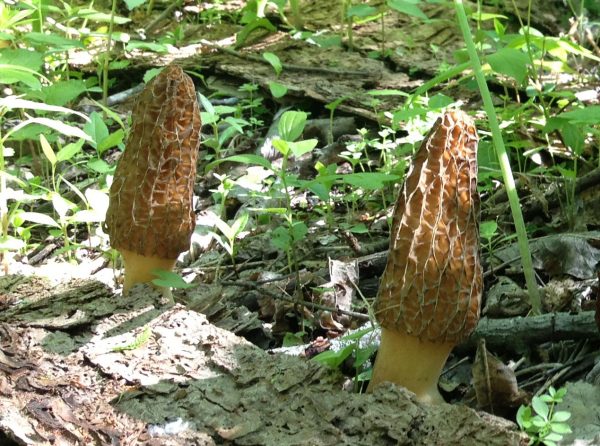 We found these morels in the woods of Ohio County. On that day, we found a total of seven morels, which was enough to make two delicious breakfast omelets.

Morel mushrooms are the fruiting bodies of a genus of fungi called “Morchella.” However, they produce spores instead of seeds. When the spores are ripe, the wind disperses them over the forest floor. A stiff breeze can carry the tiny spores large distances, and an individual mushroom releases thousands of spores, so one mushroom will inoculate a fairly large area. If a spore lands in a damp area rich in nutrients from decaying organic matter, it will begin to grow into a new fungus, which consists of a collection of fine strands called the mycelium. The mycelium is the vegetative part of the fungus. The mycelium for morels consists of strands that are very small, but it can grow to cover acres of woodland if the forest floor contains plenty of moisture and organic matter. The mycelium also invades the roots of certain kinds of trees. For example, the Morchella fungus loves elm trees, ash trees and apple trees.

For some reason that scientists do not fully understand, trees with roots that are infected by the Morchella appear to thrive better than those that are not infected. Therefore, the Morchella fungus forms a symbiotic relationship with those trees because both the tree and the fungus benefit from the Morchella infection. The Morchella fungus is a remarkable organism because it can draw nutrients from both the organic matter in the soil and from the roots of the infected trees.

That invisible mass of small underground strands known as the mycelium and growing a few inches deep in the soil contains hard nodes called sclerotia, which are formed from clumps of the strands. If one of the host trees dies and the other conditions are favorable, those sclerotia may begin to grow into mushrooms. In order for them to do so, the soil must contain sufficient organic matter and moisture, and the temperature must be just right.

Scientists have observed that some types of morels often appear in abundance during the years after a forest fire. However, the death of a host tree is not always the trigger for the production of the mushrooms. The reasons that the mushrooms appear in other locations are not fully understood. Until a few years ago, nobody had successfully cultivated morel mushrooms. However, the Chinese have since figured out how to do so, and there are large commercial morel growing operations in China today. 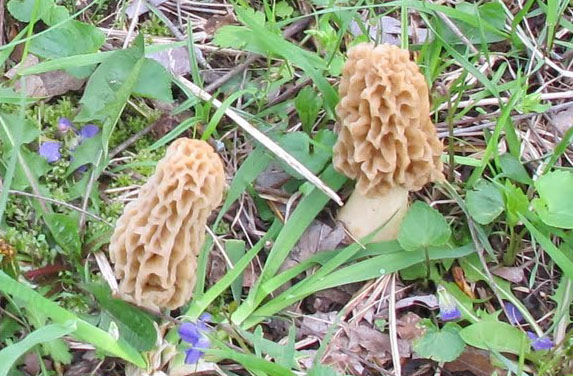 Here are two more nice Ohio County morels. Morels are common in the woodlots in this region.

If you have read all of this so far, you should be ready to go into the woods to look for dead trees so that you can examine the forest floor around them for morels. This spring, Betty and I found morels within a radius of about 50 feet from a large ash tree that had been uprooted during a storm a couple of years ago.

The morel season is likely about finished for this year, but remember this information for next year. Scientists have suggested that searching around dead elm trees that have begun to shed bark might be productive. Those trees will have been dead for a couple of years. Morels love to infect the roots of apple trees, so searching an old, abandoned apple orchard might be a good idea.

Next spring, I am going to look around the trees that have been dead for a few years, and I am going back to where we found the morels this year. If you are wondering about that exact location, I will tell you that it was “in the woods.”

• Earl Nicodemus is retired after 40 years of teaching Instructional Technology at West Liberty University. He helped to form the West Liberty Historical Society, and he and his family have taken care of the historic West Liberty Cemetery since 1985. He is particularly interested in folk stories about local historical figures and often gives presentations to community groups.