Every child needs a hero to look up to, but neglected or abused children need superheroes. On a chilly Saturday in Triadelphia, runners from all over the Ohio Valley laced up their running shoes and tied their superhero capes to do their part. Among Saturday’s bold athletes were The Flash, Superman, Captain America, Spider-Man, Mario, Wonder Woman and many more. They suited up and powered through more than three miles in the fifth annual CASA Superhero 5K at the Highlands.

Behind the superhero masks on April 21 were mothers and fathers, children and grandparents, puppies and running enthusiasts of all ages. Some came for the course, others came for the food, some came for the exercise and all came for a good time. 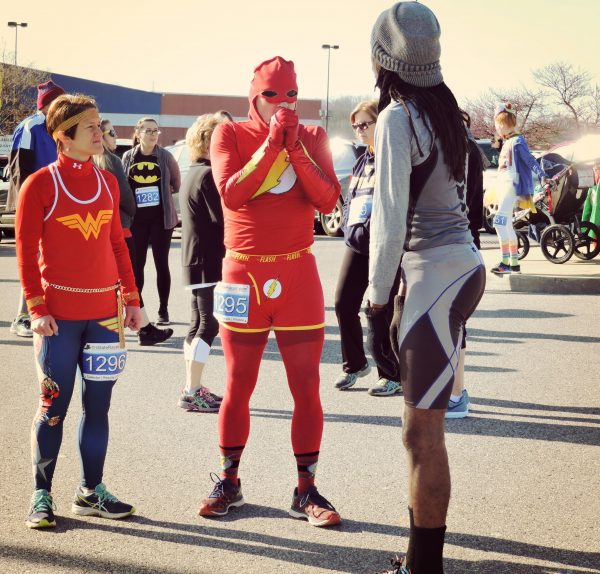 Despite chilly temperatures early Saturday morning, superheroes of all ages turned up at the 2018 CASA Superhero 5k at the Highlands.

“The 5k was great this year,” said Jennifer Mack, who attended this year’s race with her friends and colleagues from work. “The route was smooth but not too easy, and always well-staffed by nice and helpful volunteers.”

Jess and Kurt Benedict have brought their family to the CASA Superhero 5k for the past four years. Both have worked with CASA in the past, and they see this as an annual family tradition. This year they were cleverly disguised as Black Panther, Iron Man (in both full size and miniature) and Wonder Woman.

“We always enjoy dressing in costume, and the kids especially get excited to run amongst their favorite heroes,” Kurt Benedict said. “We actually won the group costume this year!”

Like most heroic plans, the CASA Superhero 5k was born from a desire to help those in need. After all, CASA supports and promotes court-appointed volunteer advocacy to help abused or neglected children be safe, find a permanent home and pursue chances to thrive. 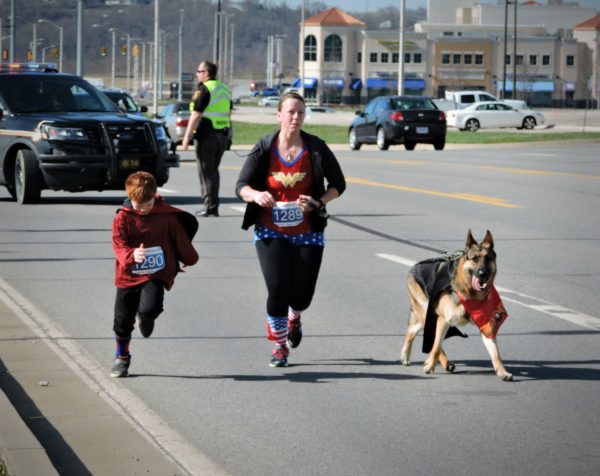 “It’s always a challenge for nonprofit organizations to find unique ways to raise funds,” CASA Executive Director Susan Harrison said. “We liked the idea of a race, but not a typical one. We knew themed races tend to work well, but which theme to choose?”

That was when CASA (Court Appointed Special Advocates) learned about the Superhero Foundation, an organization that helps people to take on their own physical challenges to inspire fundraising efforts. The foundation’s mission is to encourage real-life superheroes to change and save lives. It was a perfect fit for CASA.

The CASA Superhero 5k is always a popular event, one of the first 5k races of the running season. It is always scheduled for the third Saturday of April. This year, 171 people crossed the finish line.

“We get a lot of support from the businesses up there,” Susan said. “Some of them provide gift certificates as prizes, some distribute water to runners, and some give coupons to runners just for participating. They also let us use the parking lots.” 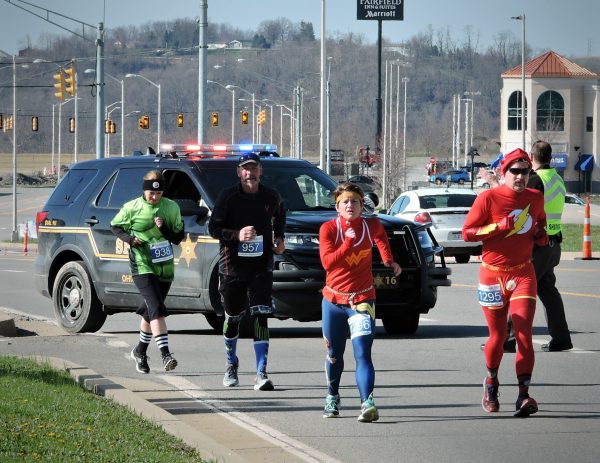 Runners know they can make it to the finish line safely under the watchful protection of the Ohio County Sheriff’s Department.

Some of Wheeling’s most devoted heroes, the Ohio County Sheriff’s Department, diverted traffic throughout the race and kept the course clear. They even provided ample encouragement, such as playing Survivor’s Eye of the Tiger on loop at the last major turn before the finish line.

Every league of superheroes also needs a headquarters, and Quaker Steak and Lube has stepped up to provide 5k participants with a staging area, restroom and post-race lunch. Marketing Manager Christine Thomas and restaurant manager Ozzie Hyde have helped coordinate this and plenty of other events.

“Quaker Steak is an amazing business for our community,” Susan said. “They open up their doors at 6 a.m., well before their normal opening hours, to provide our racers and volunteers with a restroom. They also help our volunteers by providing outdoor warmers and free coffee. That’s just the kind of people they are, and that’s why we keep coming back.”

Lastly, Susan said the race’s main sponsor for all five years has been the Christian Fellowship Foundation, an exceptionally helpful organization whose monetary donation has gone a long way in helping CASA and other organizations. 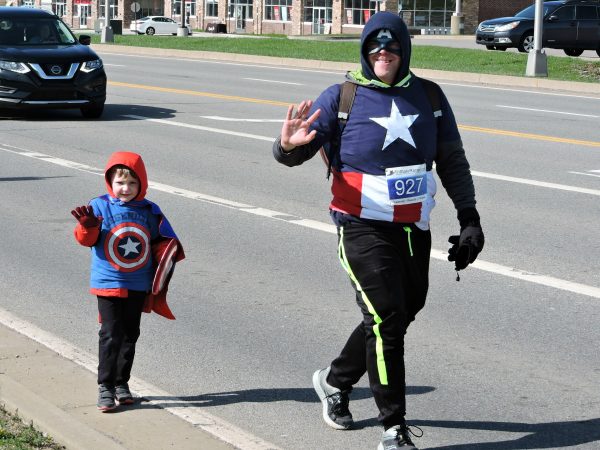 A miniature Captain America prepares to finish strong alongside his adult counterpart at the 2018 CASA Superhero 5k.

Plenty of people left Saturday’s race with prizes. To ensure the whole family has a chance to win, race categories include the top three male and female runners and walkers, child awards, costume contest awards and even dog awards.

“Overall this was another fun race,” Jennifer said. “It’s for a great cause and I’m excited to participate again next year!”

• Born and raised in the Ohio Valley, Daniel Dorsch brings a rich background of research and writing to Weelunk. He studied at West Virginia University and Duquesne University and has worked as a historian, a journalist and a marketing communucations expert. Daniel’s personal philosophy is that every person and every place have a story to tell, and he makes it his mission as a wordsmith to help tell them. Daniel lives in Weirton with his wife and son.