High school seniors in Appalachia want you to know what they think about the biggest political issues of our time ahead of the 2018 midterms — the first election in which many of them will be eligible to vote.

That’s why more than 800 of them from schools in West Virginia, Pennsylvania and Kentucky participated in 100 Days in Appalachia’s innovative polling project. Conducted in September through GroundSource, questions about pivotal issues, like health care, gun control and LGBTQ rights, were sent directly to these students via text message and in seconds, their voices were heard.

“We believe politicians and the media should know where young Appalachians stand on America’s most important issues. So we asked them,” said Jake Lynch, community engagement editor for 100 Days in Appalachia. “Now, we hope their answers will inform and direct reporting about these young people’s priorities, as voters, wherever that reporting is being done.”

100 Days is a media collaboration of the West Virginia University Reed College of Media, West Virginia Public Broadcasting and The Daily Yonder of the Center for Rural Strategies in Kentucky. The polling project was the result of its partnership with Inspire US, a nonpartisan organization that encourages high school students to be civically engaged.

Along with the survey, students at a handful of participating high schools also shared their opinions on the issue directly with 100 Days in traveling audio recording booths.

“More than 22,000 high school seniors in West Virginia registered to vote in the past 18 months, but these teenage voters remain a largely unknown quantity,” said Lynch.

“By creating this opportunity to tell us where they stand on the big issues, I think we’ll learn a lot about our democracy, and where our country is headed,” he added. 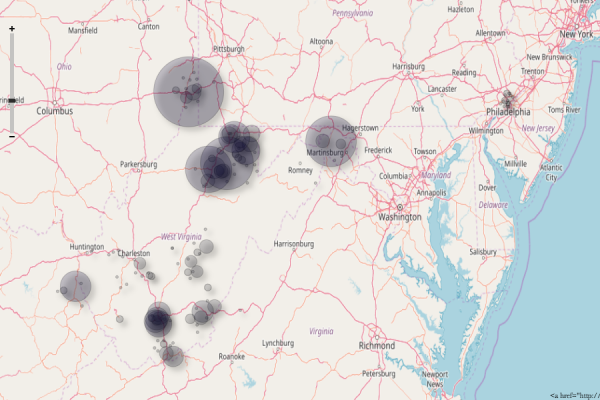 Where the respondees reside.

HERE’S WHAT THEY SAID:

Do you agree there should be stricter controls on access to assault-style firearms, such as semi-automatic rifles?

Do you support the idea of teachers carrying firearms in schools?

Do you agree the government should more strictly regulate industry and businesses in order to protect the environment?

Do you agree we should reduce the number of people immigrating to America?

Do you agree that America should help people fleeing human rights abuses or persecution in their own countries?

Do you agree that America should continue to play an active role in conflicts and humanitarian efforts in other countries?

Do you support providing healthcare to all U.S. citizens, regardless of their ability to pay?

Do you agree that a woman should have the right to chose to have an abortion?

How important to you is getting a college degree?

Do you support increasing taxes or decreasing funding for other services in order to provide more funding for public education?

Do you agree that same sex couples should be able to marry?

Do you agree that corporations and the wealthy should pay more in taxes in order to help low-income Americans?

Do you agree that the government should provide subsidies for housing and food to low-income people?

If you will be eligible, how likely are you to vote in the upcoming 2018 midterm elections?

On a scale of 1 – 10, with 1 = Don’t Trust At All and 10 = Trust Completely, how much do you trust the news about political and social issues you see on social media?

• 100 Days in Appalachia is an independent, nonprofit news outlet incubated at the Media Innovation Center of West Virginia University Reed College of Media in collaboration with West Virginia Public Broadcasting (WVPB) and The Daily Yonder of the Center for Rural Strategies in Kentucky. It has an open-source, co-publishing model and shares content from Appalachia’s diverse communities with regional, national and international media organizations.