He thought he hated it.

He believed he would be happier with a “real job” instead.

And that is why downtown Wheeling now welcomes its newest eatery in Tacoholix at 1062 Market Street.

“I really thought that once I graduated from West Liberty that I was going to try to stay away from the food service field after working in it for so long while working toward my college degree. I believe I wanted a real job,” the entrepreneur admitted. “I worked at Williams Lea, and I did enjoy it because that’s a really great company, but the longer I was away from the food business, I missed it more and more.

“I really missed the interactions I used to have with people when I was employed at the Glassworks Lounge at Wilson Lodge because I was able to build great relationships with so many of the people who went to the lodge,” Comack said. “Those kinds of relationships are still business relationships, but they are more casual than what I experienced when I was working outside the food service industry. It’s the way I like to interact with other people.” 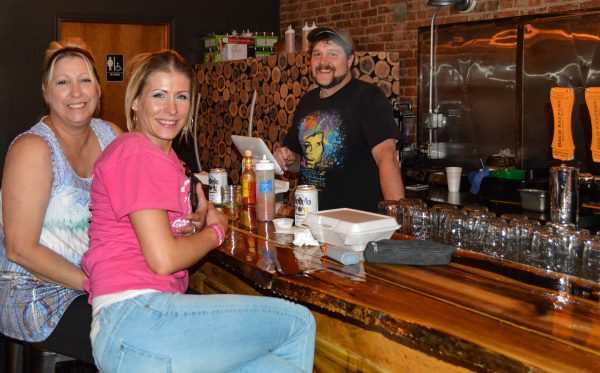 Diane Savage and Alisha Mirides, both residents of Shadyside, OH, paid Comack a visit during his first week of operation.

Comack, a member of the Class of 2000 from Wheeling Park High School, was graduated from West Liberty University in 2009 and moved to North Carolina before his college commencement. It was during that time when he encountered a flavor of food he now offers at Tacoholix. The eatery’s menu features eight different tacos that include pork, chicken, or ground beef, and the beverage menu is stocked with a plethora of craft and domestic brews as well as soft drinks.

“The Juan,” he explained, is the signature menu item, and it includes braised, shredded pork with homemade taco sauce, onion, and cilantro on a corn or soft tortilla.

“I believe pork is delicious, but of course we will have beef and chicken, too,” Comack explained. “I learned a recipe several years ago that was one of my favorite dishes that I have ever had. Everyone that I’ve ever made it for has told me that they thought it was amazing, too

“I learned it while I was living in North Carolina for several years, and I was dating a girl with roots in Mexico. She had me to her mother’s house for dinner, and I spent some time speaking with her mom because her cooking was fantastic,” he said. “I learned so much from her, and she really got me hooked on the kinds of foods that we are now be serving at Tacoholix.” 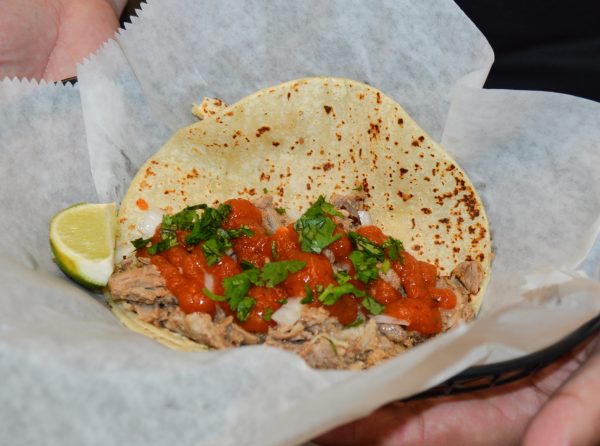 “The Juan” is a recipe Comack learned several years ago while living in North Carolina.

Unlike all other restaurants in the Wheeling area, the Tacoholix kitchen is situated inside a food truck that is parked in the rear of the renovated structure that once was the home of the Industronics business across the street from Market Plaza. Chef Kenny Palmer churns out the establishment’s tasty tacos, and staff members, including Comack and his wife Alison, deliver the items to the eatery’s high-top tables or to patrons seated along the wall-length bar.

“The food truck idea started the whole business,” the owner said. “We were just going to do a food truck, but then we started looking into the cost of renting the lots where we could locate, and it turned out that for 15 percent more we could go brick-and-mortar to offer our patrons a place where they could sit down under a roof and enjoy what we have to offer.

“After we considered all of that doing just a food truck didn’t make a lot of sense to us,” Comack said. “The way we have it now with the food truck in the rear of the building, we will be able to do both because we do plan to visit a few of the events here in Wheeling during the next few months. When we do that, our menu will change a little here, but not by a lot, and when the colder months arrive, we have a plan to make sure both our food and our employees stay warm despite where our kitchen is located.”

He has elected to offer only dinner service between 4-11 p.m. to begin because, Comack explained, he understands lunchtime in downtown Wheeling can be a hectic period since many workers have only an hour or less to obtain mid-day sustenance. His goal is to reach a service level during which he and his staff are capable of serving as many as 120 food orders per hour. 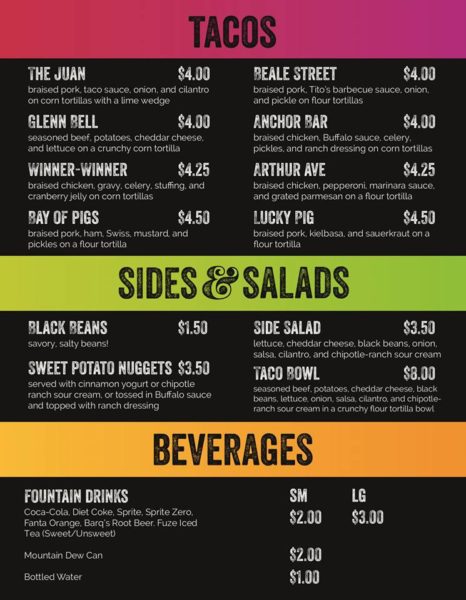 The menu at Tacoholix features eight signature tacos, including “The Juan.”

“We’ve started out very softly businesswise in the evenings because we want to make sure we have the correct formula of service before welcoming the lunch crowd, and that way we’ll be able to look for ways that we can streamline our service,” Comack said. “We want to drive our efficiency so we can be confident that we can handle the lunch hour, and as soon as we do that, we will open for lunch. It’s all about being efficient while also delivering great food to our customers. To me, there’s no point in offering a lunch and dinner service if we’re unable to be confident that our product and service are the best they possibly can be.

“And I know that when people are driving by or walking by our location, they cannot see the interior of the restaurant, and that’s on purpose,” he explained. “I know people are always curious about the ‘new place,’ so we want people to walk in because they really like the atmosphere we offer inside our front door.”

It’s different, again, than most other local eateries, because of the dropped-bulb lighting, high ceiling, and the absence of electronic entertainment.

Yes, that means no televisions and no juke box. 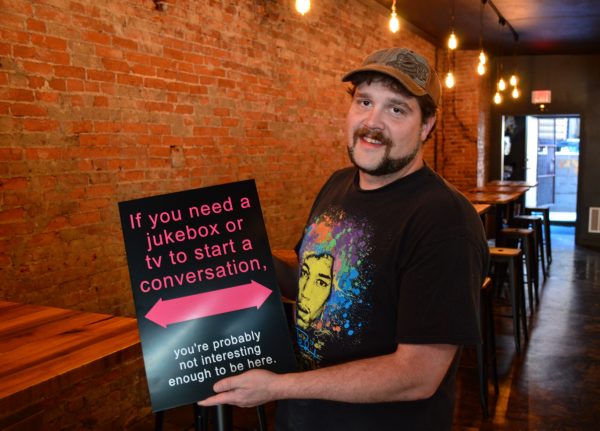 Comack has adopted a policy that he hopes will spur new introductions and conversations.

“Until just a few days ago I wasn’t a Facebook member, and I still don’t want to be on Facebook because I don’t like all of the false intimacy and that kind of communication,” Comack explained. “I like good, old-fashioned conversation, so that’s what we are trying to promote. We have playing cards, board games, and dice games.

Comack also is developing what he refers to as an “off menu” with Asian-fusion items, but he does not plan to publish those dishes anywhere.

“You’ll have to visit us to find out what’s on that menu, and it will change because of the specials that we’ll offer at certain times of the year,” he explained. “And although we do not have fish tacos on our daily menu, we will offer them from time to time.

“I do love it. I love cooking, and I certainly love eating,” Comack said. “I thought I wanted to get out of the food business, but I was wrong about that. I realized how much I love the business, and I’m looking forward to getting to the point where we can be confident to be open all day long.”