Editor’s note: As part of an occasional Weelunk series examining spirituality in the Ohio Valley, we look today at the Eucharist, also known as communion or the Lord’s Supper. Perhaps the very essence of Roman Catholic worship, the Eucharist has been offered in the Wheeling area since the very first French Jesuit priests were traveling up and down the Ohio River in the 1600s and 1700s.

Msgr. Paul Hudock shifts his lanky frame against the hard wooden pew and looks out, more across the years than in survey of the Romanesque spareness of the sanctuary. “That’s kind of like asking, ‘which sunset was your favorite,’” he says. Then, he grins as he suddenly remembers a certain Eucharist that stands out from the rest.

“I remember crying,” he reflected on his 1998 ordination at St. Joseph Cathedral in downtown Wheeling. It was his first Eucharist, or communion, celebrated as a Roman Catholic priest. “It was a gift.”

From there, the memories flow. There was another special Eucharist that took place during an airport layover in Australia. He was part of a group headed for a World Youth Day. “We were on this concrete sidewalk. Everyone was sitting on their luggage.”

There was a breaking of the bread in a backyard at a home for disabled children in Haiti. An assist to Pope Benedict in serving the cup to more than 1 million participants in Cologne, Germany. A sacrament offered deep in the forest at youth camp. Not to mention the nearly 10 Eucharists he celebrates each week as part of the Mass schedule at St. Vincent de Paul Parish in the Elm Grove neighborhood of Wheeling, where he has pastored since 2015.

Even those daily celebrations leave him in awe, the Maryland native said. That is particularly true in the moment of silence right after the symbolic sacrament has been observed. “I’ve come to realize that the Lord is with me.  … I’m aware of my heartbeat and aware of my breath and my thoughts. I’m thankful that God is with me in this gift of life.”

Hudock said the Eucharist — a memorial of Jesus’ crucifixion that originated when Jesus linked his impending sacrificial death to the lamb killed for the Jewish Passover — is the cornerstone of not only his priesthood but of the Catholic expression of Christianity.

“I believe the Eucharist is real,” he said of the doctrine of transubstantiation. The host (bread) and cup (wine) have the “accidental properties of bread and wine, but the essence is that of the body and blood of our Lord Jesus Christ.” 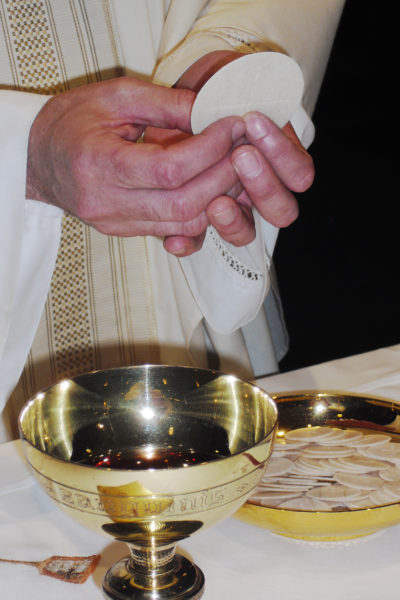 Msgr. Paul Hudock presents the bread and wine, symbolic of the body and blood of Jesus, as part of the Eucharist. To celebrate the Eucharist, Hudock wears a white robe called a chasubule. Some occasions call for the chasibule to be green, red or purple instead. (Photo by Nora Edinger)

In keeping with such deep symbolism, Hudock said everything about how the Eucharist is celebrated is precise. For example, there is a specific path the bread and wine takes as it works its way through the sanctuary. Congregants first see a glass carafe of wine and an open bowl of cracker-like hosts on a table in the middle of the sanctuary aisle. That combination, referred to by Catholics as “the gifts,” makes its way to the altar, where it is blessed by Hudock and distributed to the congregation as the culmination of the Mass.

Anything that remains of that consecrated Eucharist is stored against the wall beyond the altar inside a metal box called a tabernacle, he said. That bread, which Catholics consider the tangible representation of Jesus’ presence, is used throughout the week to share communion with those who may be hospitalized or otherwise unable to attend church. 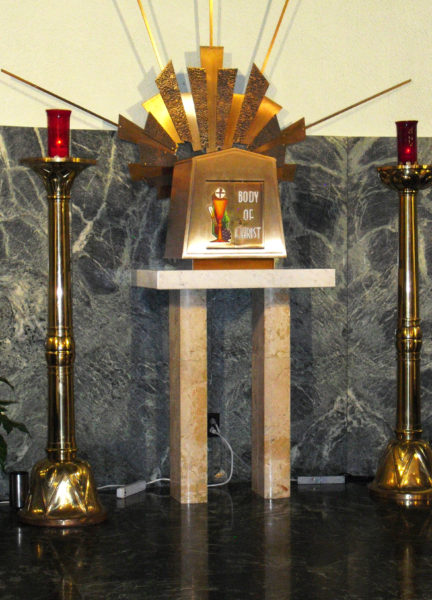 The tabernacle, a special box behind the altar, stores blessed hosts that remain after Mass. This consecrated supply is revered as the tangible presence of Jesus and is used for off-site communion, such as that served in hospitals, during the week. (Photo by Nora Edinger)

Hudock finds that very presence of the Eucharist — Greek for “thanksgiving” — so powerful, he tries to spend around an hour in the sanctuary each day, just to be near that expression of divinity.

Alone in the sanctuary is good, but he would also like to see more parishioners enjoy the same blessing. He likes it when he sees everyone coming together: rich and poor, Republican and Democrat, old and young, those with lots of faith or weak faith. “Not only do I believe in God,” he said, describing the dual vertical and horizontal nature of the Eucharist, “But, I’m part of this community.”

Hudock said the reforms of the Second Vatican Council call for the full, active and conscious participation of all the faithful who attend the Mass. Ideally, that would be on at least a weekly basis, in line with a 10 Commandment admonition to honor the Sabbath day. “This place would be packed,” he said with another grin, if such a thing actually happened. 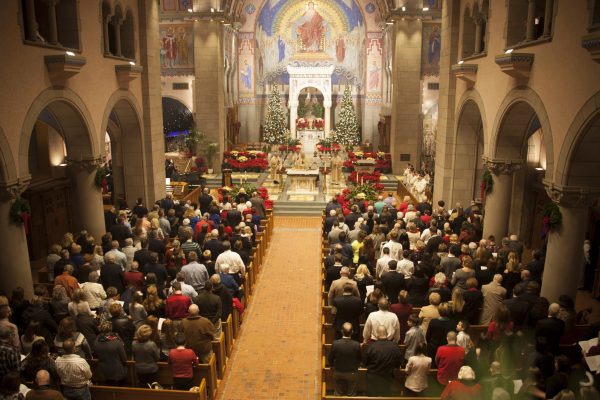 The Most Rev. Michael J. Bransfield, bishop of Wheeling-Charleston, elevates the Eucharist during the celebration of the Mass of the Nativity of the Lord (Christmas Vigil) at the Cathedral of St. Joseph in Wheeling. Concelebrating the Mass are Msgr. Frederick P. Annie, V.G., far left, and Msgr. Kevin Quirk, J.C.D, J.V., rector of the Cathedral, far right. (Photo provided by the Diocese of Wheeling-Charleston)

As it is, he serves the Eucharist to between 400-500 people each week.

He applauds an effort by Pope Francis to see such numbers increase. While Hudock said Catholics support a standard of right and wrong that goes beyond the individual conscience, he said Pope Francis has been active in restoring those in “irregular situations” to church attendance even if they are not spiritually eligible for full participation in the Eucharist.

“The Lord’s not done with any of us yet,” Hudock said. “You have people who are pretty beaten up … people are in such great need for God’s mercy and accompaniment.” 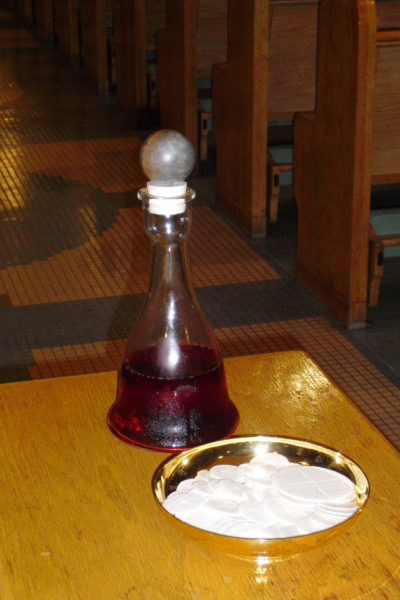 “The gifts” serve as a visual aid in the middle of the aisle at St. Vincent de Paul Parish. During each Mass, Eucharistic bread and wine proceed from this small table to the altar, where they are blessed by Msgr. Paul Hudock. Long ago made on special waffle irons by nuns, modern hosts are now ordered from Roman Catholic supply companies. These wafers, or hosts, came from Pittsburgh. (Photo by Nora Edinger)

For his own contribution to broader participation, Hudock is experimenting with touches of modernity to increase the allure of regular church attendance. Beginning in September, the main Sunday Mass will include drum, keyboard and electric guitar music along with the more traditional organ and piano accompaniment. St. Vincent de Paul will also offer small-group meetings in addition to full-scale Mass.

“Modern society is very good at isolating us,” he said of the need for such fellowship. “We really do need other Christians.”

And, he added, the tangible Eucharist just isn’t available anywhere else.

“I think there’s something earthy about Catholicism … It’s not a religion that is merely beautiful ideas and beautiful theology. He (God) wants to bless this fleshy existence that we are … What an amazing idea that the Eucharist food is animating us from the inside.”

Not that the Eucharist is intended to stop there, he said of what the Second Vatican Council called “source and summit” of the faith. “We need to become food to the world.” 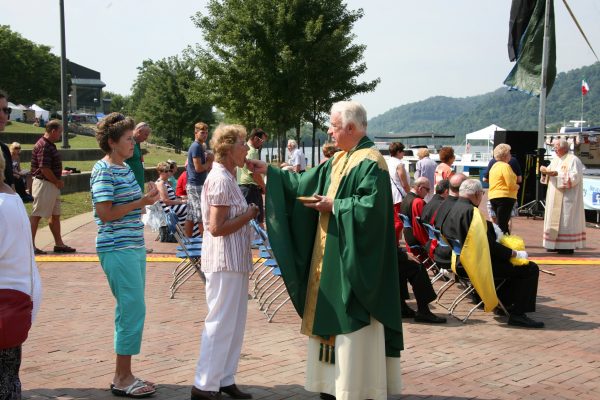 Weelunk is proud to have the Diocese of Wheeling-Charleston
as a generous supporter.