On Monday the 21st of this month, the Ohio Valley will witness a rare, celestial event known as a solar eclipse. This phenomenon occurs when the earth, moon, and Sun align creating a union between shadows and geometry. Casting its shadow over Earth’s daytime sky, the moon blocks out the sun’s light either fully or partially based on the observer’s location. In some areas of the continental United States, the moon will completely obscure the sun, which hasn’t happened in this part of the world in 38 years. The moon’s “umbral shadow” will begin its path of total darkness in Lincoln City, Oregon as it travels downwards at a slant before ending in Charleston, South Carolina. Only in this region will the radiating slivers of the sun’s corona, its outermost atmospheric layer consisting of plasma, be visible to the naked eye. Since the Ohio Valley is further north of this shadowy belt, an 83.3 percent crescent will be visible in its day sky.

The SMART- Center in partnership with the Astrolabe Astronomy Club, Near Earth Object Foundation, and SMART Centre Market, will be holding a free event opened to the public at shelters 3, 4, and 5 in Grand Vue Park from 1 PM to 4 PM to view the eclipse. These organizations  will be providing special eclipse glasses to all 400 Marshall county student participants to view the eclipse safely. Telescopes with solar filters and other stations will be set up at the event.  The moon’s shadow will appear to slide across the Sun at approximately 1:06 PM. At 2:36 PM, the eclipse will be in its fullest form at an 83.3 percent crescent for a range of an hour and twenty minutes before commencing at 3:55 PM.

Free, public events are the core of the SMART Center’s mission. Its name an acronym for “Science”, “Math”, “Art”, “Research”, and “Technology”, the organization offers a diverse set of educational programs ranging from summer camps to free events like this massive eclipse watch. Possessing a mutual desire to educate and actively participate within the scientific community, Robert Strong founded the SMART- Center with his wife Libby in 1994. The organization has given numerous presentations at the National Science Teacher’s Organization, the Space Studies Institute at Princeton University, and published papers in several science journals. Possessing a degree in math, philosophy and physics, Robert Strong focuses parts of his research studying the compositions and locations of asteroids, comets, and how we can prevent them from colliding into the Earth in the future. But for him, opening up a national conversation on the topic proves the most vital. Huge Hollywood action films showcasing missiles or astronauts blowing up these hurtling rocks of death in heroic spectacles transforms good movie scenes into potential future strategies utilized by the US Military. Robert explains, “They’re not evil. If we can move them into a safe orbit, that’s the right thing to do instead of simply blowing them up.” Launching missiles at oncoming asteroids could worsen the situation by fragmenting them into shards still massive enough to break through Earth’s atmosphere before destroying a larger, more dispersed area. Education for the Smart- Center begins with instilling knowledge and appreciation for the natural scientific universe in order to shed popular misconceptions with the potential of unleashing devastating and unforeseen consequences. 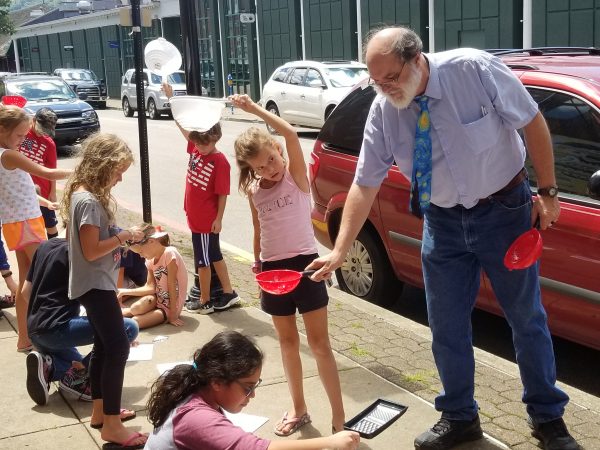 In preparation for the solar eclipse, Robert and Libby lead a group of grade school students outside their shop’s doors in Centre Market. With basic household items like pasta strainers, they teach their students how to observe the eclipse closely without being unconsciously blinded by the Sun’s harmful ultraviolet rays. Robert explains that the reason we blink when facing the Sun is because its bright light acts as a stimulus causing our bodies to instinctively protect themselves. During a solar eclipse where a huge majority of the Sun’s visible light blotted out, our bodies are tricked into thinking it’s nighttime, but its harmful radiation is still very much present. Here, they hover these household objects containing holes over the ground in full sunlight. The Sun, in turn, projects its circular shape through these holes onto the cement below. On the day of the eclipse, however, these homemade instruments will reveal an altered version of this. As the moon begins to appear to slide across the Sun, crescents will pierce their way onto the ground below. This will be the apparent “shape” of the sun at the time of the eclipse. Equating the importance of safety with observing this rare, natural occurrence, Robert gleams, “This is a celestial event where we are at the right place at the right time, and get to witness one of nature’s wonders. This is going to be spectacular.” 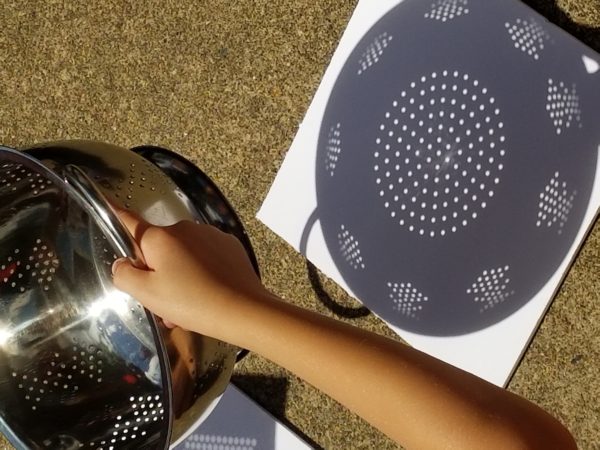 Peering into the dawn of human civilization, celestial events have shaped folklore, narrative archetypes, and religion. Our planet Earth fits very exact measurements to behold these occurrences. During a solar eclipse, for example, the moon appears the same size as the Sun. With this in mind, the moon is 400 times smaller than the Sun, but is 400 times closer. Our position within the solar system is exact, within the range of a couple percent, to enable an alignment of planetary and stellar matter. This celestial landscape has marked the human imagination throughout history. Earth’s orbit around the Sun has inspired ancient cultures in what folklorists term as “solar mythology”. The cycling of the sun and moon led these ancient peoples to conceive of concepts such as birth, inevitable death, and rebirth in the form of mythical gods constantly waging evil against an incoercible good. Upon these early landscapes, tribes would witness an inkblot “eat” the sun during a solar eclipse. Perceiving this harrowing sign as a serpent, they would shoot arrows at it until this “creature” regurgitated the Sun as the Earth continued on its indifferent orbit. Inspiring and transforming ages of human culture, these stellar events are ingrained into our collective, shared history as a species on this planet.

Although the oncoming solar eclipse can be viewed from the home’s back yard, the event in Grand Vue Park will offer an ideal space for observation equipped with experts, viewing instruments, and a wide open field. The next solar eclipse will not be due for another 7 years until the year 2024.