The preservation of history involves much more than stories and structures, and that is why officials of the Wheeling National Heritage Area Corp. and volunteers partnered a few years ago to begin telling the tales of those interned within the Friendly City’s oldest cemetery.

And the time has arrived for the next step to be taken for those buried in the Mount Wood Cemetery located atop Wheeling Hill thanks to the creation of an online story map and web presence for the restoration project. Jessica Brewer, of Mountain State Consulting and Design, an architectural design and GIS mapping consulting business located in Morgantown, W.Va., was contracted to create the story map.

The Mt. Wood cemetery story map tells the history of the cemetery from its incorporation to present day, featuring historic maps and photographs, and it also showcases before and after photographs of the restoration work that has been performed during the past three years. The map also lists those buried in Section A with corresponding photographs and historical information, and the content in this section is still being researched and added by volunteers.

The story map can be viewed on the Internet by using this link: Mt. Wood Map 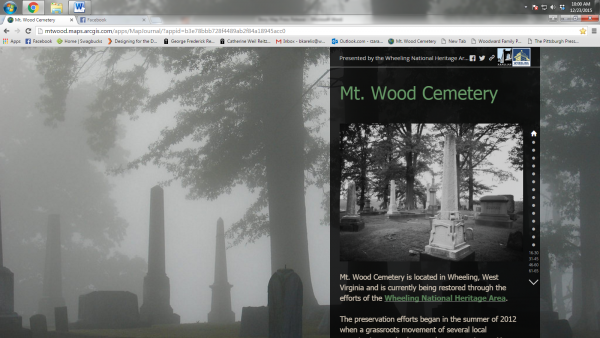 “The Mount Wood Cemetery project has been going on for a number of years now, and we wanted to make it a relevant project that could reach younger folks and people who may live far away,” explained WNHAC historian Rebekah Karelis. “We wanted to make it more accessible to people who won’t be standing inside the cemetery any time soon. We estimate that there are about 2,000 people who have been buried there, and we focused on Section A for the beginning of the story map. Section A has 71 plots in it where 250 burials have taken place, so the amount of history in that one section is a very large amount.

“There are many doctors who have been laid to rest in the Mount Wood Cemetery who, in the early 1800s, were keeping people alive here in Wheeling, and there are many veterans from many different eras who were buried there. We’re not 100 percent sure how many, but there have been accounts that have indicated there could be as many as 900 there,” she said. “There are so many people who made Wheeling what it was and still is today. Wheeling was built on the backs of hard work, and what is so special about Mount Wood is that it is the oldest surviving cemetery in Wheeling. The others were moved, and many of those people were moved to Mount Wood.”

Karelis said that when the cemetery was transferred from the cemetery association to the City of Wheeling in the 1970s, the cemetery records were mostly lost, and those that did exist were incomplete. One ledger exists in care of the city, as well as a transcribed copy of another ledger that is in the care of the Wheeling Area Genealogical Society, but both records are incomplete or often show false accounts and information about the cemetery and those who are buried there. 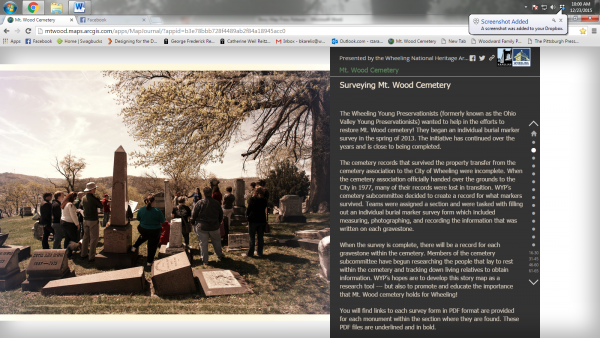 Surveying the Mount Wood Cemetery has been a task tackled by members of the Wheeling Young Preservationists.

In an effort to help, members of the Wheeling Young Preservationists began the individual burial marker survey in the spring of 2013 in an attempt to make existing records more accurate. Teams were each assigned a section and were tasked with filling out an individual burial-marker survey form that included measuring, photographing, and recording the information for each gravestone.  The lengthy and often tedious process of surveying the cemetery has continued since 2013.

“The Young Preservationists have a very active cemetery subcommittee, and we have gone on several field trips to cemeteries,” Karelis said. “The grave survey has been going on for several years, and that process is only taking place thanks to that organization. A lot of people have stayed the course, and they have come back year after year. They have also volunteered to do more of that process in the future.

“I believe 75 percent of the cemetery has been surveyed thanks to them, and this story map project would not be taking place if not for the Young Preservationists,” she said. “Without the members doing the legwork, this project would not have come about the way it has. The amount of time they have dedicated to these surveys has been incredible. They’ve done a really special thing.”

Although the story map includes information only on Section A at this time, the cemetery’s other 20 sections will be included in the future once funding is secured. Tax-deductible donations to the Mt. Wood story map development can be sent to Wheeling National Heritage Area, P.O. Box 350, Wheeling, W.Va.  26003. Checks should indicate “Mount Wood Story Map” on the memo line. 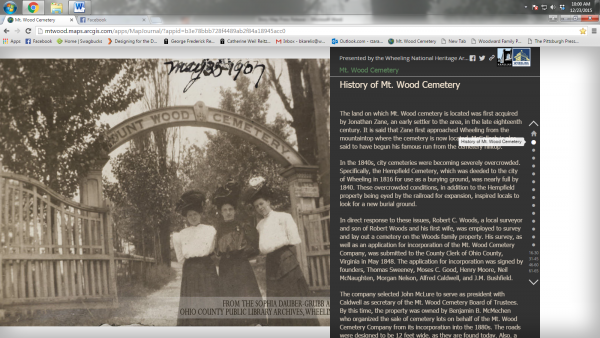 It is the city’s oldest cemetery and many of those who built Wheeling have been interned there.

“We’ve been doing research on who is in the Mount Wood Cemetery, and we are still discovering these amazing tidbits of history about some of the men who we have found to be buried there. There’s always a new discovery being made,” Karelis reported. “It was opened in 1848, and it was built during the rural-romantic movement, which meant it was situated outside the city.

“That’s when they started cemeteries in really beautiful areas that had unique geography, and Mount Wood is a great example of that movement,” she continued. “Because it’s on top of Wheeling Hill, the views from there are really the best you can get if you want to see the city and the valley where it was constructed. It’s really a gorgeous ridge.”

And Mount Wood also provided many additional examples of the movement, including large trees, beautiful scenery, and unique monuments throughout.

“At this time the people wanted cemeteries to seem less crowded, so the plots were bigger than what they had seen before. It was a time when cemeteries became park-like,” Karelis explained. “It’s where everyone went on the weekends to have their family picnics because it was a very beautiful place. 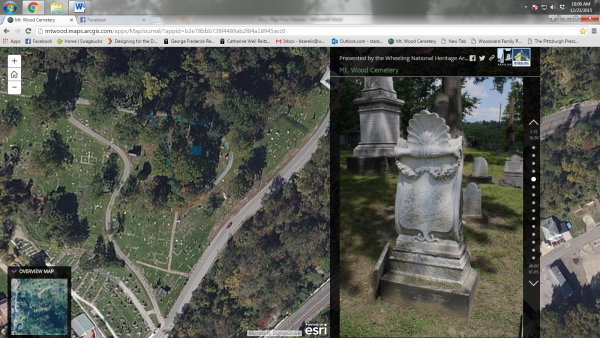 The Mount Wood Cemetery is much larger than many expect when making their initial visit.

“Having the picnics there was a way of honoring the dead and a way of visiting the family members who had passed away,” she continued. “The people of that time considered it to be an honorable way to pay their respects to the family members they had lost.”

Karelis also had guided the preservation project at Mount Wood that has progressed mainly because so many local residents have volunteered hours of labor in an effort to return the historic burial ground to its original setting. Through the years many of the gravestones had toppled, and the cemetery appeared forgotten, but the work over the past three years has made a significant difference.

“This past year was a really big year as far as our work to restore and preserve many of the monuments that we have reset thanks to the hard work of the people who wished to get involved with it,” Karelis said. “The work performed during the past year has really started to have an impact because we have started to see so many more monuments that had been knocked over for whatever reason.

“Students from Belmont College have become involved, and they are continuing their work on the Rosenberg Arch, and we have received a grant from the state historic office to do preservation planning for two of the 10 mausoleums that are in the Mount Wood Cemetery,” she said. “Out of the 10, two of them have structural issues, five of them need work, and the three others seem to be OK right now.

“And we plan to continue working hard on it in 2016 because it’s about the history and preserving that history for future generations,” she added. “We’ve learned a lot of lessons so, that is why doing this kind of work is so important to a lot of people in our community.”