It was the l-o-n-g-e-s-t dinner in the history of award dinners, but at least for some the extended wait began with apple pie.

And it gave each and every one of the 38 members of Wheeling Park High’s speech and debate team time to contemplate the “What ifs,” and there were a few anxious moments along the way.

“I can tell you that it didn’t help that the winners for the first few events that were announced had Huntington High winning, and that was very nerve-wracking for all of us because Huntington had been our main competition the last few years,” explained Joshua Fromhart, an assistant under head coach Bill Cornforth since 2008. “That’s when everyone started looking at each other, and I’m sure we were all thinking the same thing.

“I think that’s when we all started to sweat a little bit, but then after those three awards we kept hearing, ‘Wheeling Park’ one after another for first, second, third, fourth places, and that’s when I believe we all calmed down,” he said. “In fact, in the category of Humorous Interpretation/Dramatic Interpretation, we had five out of the six winners.”

That’s because a particular mode of operation, one handed down to them from past title-toting teams from throughout this incredible string of 38 consecutive titles, took over.

“This was the first year that the speech team was our team, and I was definitely scared. No one wanted to be members of the team that let the streak end,” said Allee McCardle, one of three captains for this year’s squad. “We have this slogan, ‘Anonymous Over Infamous,’ and that means we really don’t want to be known. We just wanted to go about it without anyone knowing our names instead of everyone knowing we were the ones who didn’t get to No. 38. 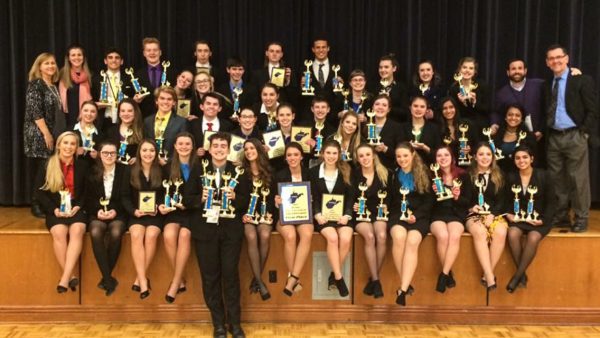 Bill Cornforth, on the far right standing on stage, has been involved with all 38 titles, a streak that began in 1980.

“But because it started off with the apple pie, it was awesome, but it was a very long wait,” McCardle said. “Plus, it was really different because that’s not normally the way the awards presentations take place. Usually, we are in an auditorium, and the announcements are made, but that’s why I am very thankful that we did get the 38th consecutive championship,” she said. “It was a huge relief because the streak is not something that any of us take for granted. We knew that for it to continue, we had to do the work and perform very, very well so we could make all of the other members of all of those previous teams proud again. When they called ‘Wheeling Park’ as the champions, tears just flooded down my face. I was sad it was over, but so very happy that we did it.”

Allee’s sister, Kelly, joined her with leading Wheeling Park High’s speech-giving students, and she explained the weight of the streak landed in everyone’s lap once a large gathering of speech and debate team members returned to the Friendly City following a four-day stay in New York City.

“We were there for our annual theater, trip, and we were all very tired when we got home,” she said. “That’s when it hit me that we all really needed to practice because of how important the state competition is. and not just to us but to every person who has been a member of those 37 teams before us.

“I knew we all knew that we had a lot of success during the year, and I was confident in everyone, but that’s when it set in for me,” Kelly explained. “I know I was one of the captains, but it amazed me how much everyone else stepped it up. They all had inspirational things to say, they all wanted to see us to do well, but there wasn’t a single person on our team that wasn’t feeling the pressure. It may have started with the captains, but every single member was ready to work hard, and they did, and here we are.” 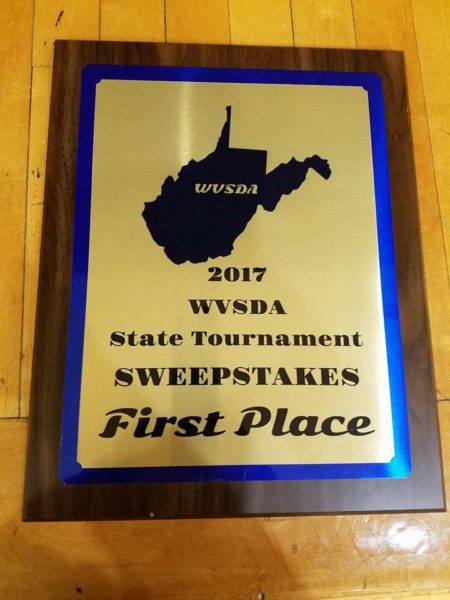 To the members and the coaches, it’s not about the size of the plaque but instead what it represents.

Eight West Virginia high schools advanced to the statewide event, and students endured three preliminary rounds in each category during the first day, and then they competed in the championship rounds during the second and final day. Wheeling Park finished its 38th straight state title with 1,117 points and outdistanced second-place winner Huntington High by 400 sweepstakes points.

“That is an accomplishment that’s never happened for Wheeling Park so, obviously, it’s a school record,” Fromhart said. “His first places were in Sales, Humorous Interpretation, Broadcasting, and Poetry, and the young man has never lost in the state tournament.

“It’s an incredible accomplishment and something for future team members to either match or beat,” he said. “The fact that no Wheeling Park team member has done it before is a statement of his hard work and how difficult a quadruple really is in such a competition.” 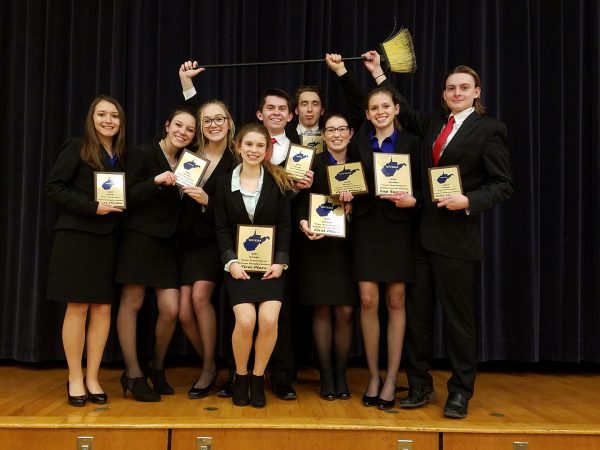 On the debate side of the competition, Wheeling Park students claimed first place in all categories, an achievement that has been accomplished only twice before since 2008.

Payne may have been the only student to claim four state titles, but the debate-side of the squad reached a benchmark Fromhart has witnessed only twice before during his 10 years.

“Our debaters did very, very well because we accomplished a clean sweep in every one of the speed categories,” said speech team captain Miriam Demasi said. “Plus, we had the best speaker in every single debate category in the state competition. It’s the result of all of the hard work and dedication of the team members, and when the results were finally announced, it was a huge relief.

“I was definitely nervous and a bit anxious, I will admit that,” she said. “But I was also confident in our team. They did so well through all of the tournaments throughout the year and I thought we could do well in the state event. But getting those clean sweeps and having everyone win is really hard to do. I was impressed and pretty overwhelmed with those results. I did not expect that.”

Fromhart has been asked on several occasions during the past week about the 38 straight titles and how he, assistants Lauri Mathieu and Kayla Nelson, and Cornforth have managed to continue the streak that began under the supervision of Fran Schoolcraft in 1980. The public school teacher has provided proof of the team’s excellence by pointing to the team’s one-point title at Bethel Park High a few weeks ago where 40 high schools and more than 500 students competed in what is the largest regional speech and debate event in the tri-state region. 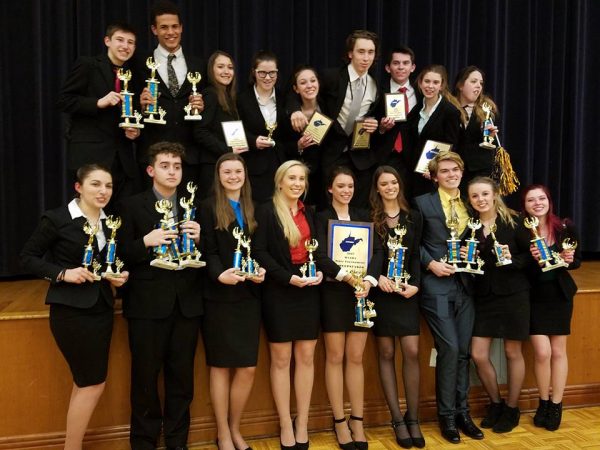 Each and every member of Wheeling Park’s Speech and Debate Team took home some hardware from the state competition.

“People ask me all of the time how we do it, year after the year,” Fromhart explained. “One question they ask is how about the competition and whether or not it’s gone downhill over the years, and I don’t think that’s the case at all based on what I have seen since 2008 because the competition in the state is still very solid.

“There are schools just as big as Wheeling Park, if not bigger, and a lot of schools have nipped at our tails,” he said. “But how do they do it year after year? There’s a little slogan we use, ‘Put in the Work,’ and that’s what they have done year-in and year-out. That’s how it happens. They put in the effort, and they get the results. That’s how they achieve the greatness, and it’s been an absolutely pleasure to be involved.”

And now it’s to the national; 11 team members will go after they qualified to compete in Louisville, Ky., during Memorial Day weekend.

“We have five debate members qualify for the national competition as well six speech competitors qualify, so now we have to start looking toward that so we can start raising the money,” Fromhart explained. “It’s not a cheap competition because it’s $50 per student to register and, of course, there’s the room and board to consider.

“Priority No. 1, though, is to get these kids to Kentucky so they can have a chance to be successful on the national level,” he said. “And I do believe that a lot of them have a chance to do quite well in that tournament, too.” 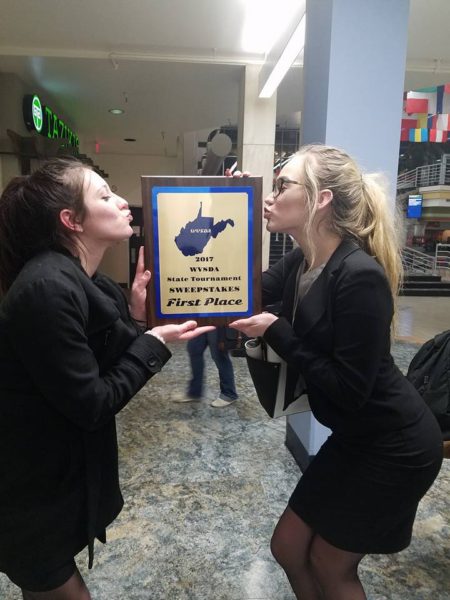 “38 Is Great” has been the chanted since these young Patriots returned home with yet another state title.

The long list of the Wheeling Park High’s winners follows: