But those “them” people are present here in the Wheeling area just as the homeless are in thousands of other cities in all 50 states in the nation. According to the National Alliance to End Homelessness, nearly 565,000 people were without a home in 2015, including almost 207,000 people who were members of homeless families.

In Wheeling, especially at this time of year, the Greater Wheeling Soup Kitchen and Catholic Charities’ 18th Street Neighborhood Center are crowded each day for free meals, and all the beds in the area’s overnight facilities are occupied each evening.

“One of the questions communities have to answer is how does someone become one of ‘them,’ and when I think of all of the people I have met over the past seven winters, all I can say is that they are sons and daughters, they are parents, they are co-workers, they are friends, and they are people,” said Moses. “Because they have been met with certain circumstances of their making or not, a community can quickly view them as a ‘them.’

“That’s one of the reasons why I like that we refer to the people we welcome here as guests because why should we refer to them as a homeless person? Guess what? We have some people who are staying with us this winter because they couldn’t pay for their utilities, and it’s too cold in their homes,” he said. “There is not one reason why a person finds themselves in that situation, and I think that’s one of the primary things that most people don’t understand about this issue.” 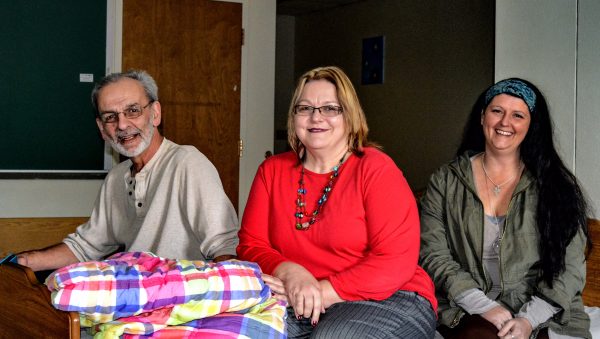 John Moses, Virginia Loew-Shelhammer, and Kate Marshall are active volunteers when it comes to assisting the area’s homeless population.

He Was Born in a Manger

The shelter’s Christmas tree glows but is without ornaments. Instead, winter gloves and scarves and hats are hung with care in hopes of keeping their guests warm once they must leave their shelter.

Kate Marshall does much the same at the House of Hagar located on 14th Street directly behind the YSS Headquarters, and during the very first Christmas three years ago she and the other volunteers learned an important lesson about those without homes.

“There was something that surprised us a bit,” Marshall recalled. “We had invited some folks to be a part of our Christmas, and we could tell that they were very happy to be there. But what we didn’t expect took place when we started to hand out these small gifts that we had purchased for whoever decided to come.

“Most of them were surprised that there was a gift for them, and some of those folks broke down and started crying. We weren’t really prepared for that because it seemed like the presents were just small, insignificant gifts. But some of them explained to us that they had grown up in some situations and that they had never before received a gift from under a Christmas tree in a house,” she explained. “I think we all learned a very important lesson, and that’s why we have invited anyone and everyone who wishes to come and be a part of our Christmas at the House of Hagar.” 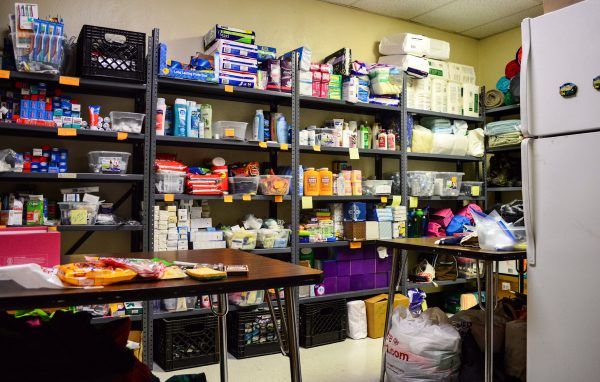 The shelter offers a supply closet to the shelter’s guests near the sleeping areas.

Moses distributes at the Winter Freeze Shelter a very simple questionnaire beginning two weeks before Christmas. On the sheet of paper there is one question: “What would you like for Christmas?”

“We started it a few years ago, and we’ve done it again this year,” he explained. “We’ve passed out this paper that asks for their Christmas list because we wanted them to give us an idea of the three or four things that they may want, and if the funds permit, we might be able to get some of those things. We always get very surprising replies.

“Some of their things on their lists are so minimal. A pack of cigarettes, a toothbrush, soap, and even help so they can acquire their state ID card,” he continued. “One fellow said he wanted a home, friends, and God, and another man didn’t want anything. He said this morning that he just wanted us to know that Jesus loves us, and so does he.”

Marshall and Moses assisted with organizing the Homeless Memorial Service held this past week at the Center Wheeling Fellowship near the Ohio Valley Medical Center. December 21 is the dedicated day to the homeless because it is the first day of winter and the darkest day of each year.

“We have lost a lot of our homeless this past year for many reasons and causes,” Marshall said. “One person who passed away this year was Carl, the gentlemen who offered his tickets to Heaven to those who tried to help him. After his death we learned so much more about him because we were able to locate some of his family members, and one of the things we didn’t know was that, at one time in his life, he had gone to jail, and while there he found God and wanted to become a youth pastor. He immersed himself into his religion and wanted to be serving instead of seeking services.

“When the homeless community loses one of their friends, they mourn for them because, although labeled as homeless, they are people, too,” she continued. “These folks spend a lot of time with each other, and they become friends through the whole process.”

Carl realized, as do Moses and Marshall today, that The Son of Lord was born into homelessness.

“I believe taking time at Christmas to think about our homeless is very appropriate because it reminds the homeless that we are celebrating a Child that was born into exactly what they are experiencing,” Marshall said. “If you think about it, Jesus was born in a manger because there was no room at the inn.” 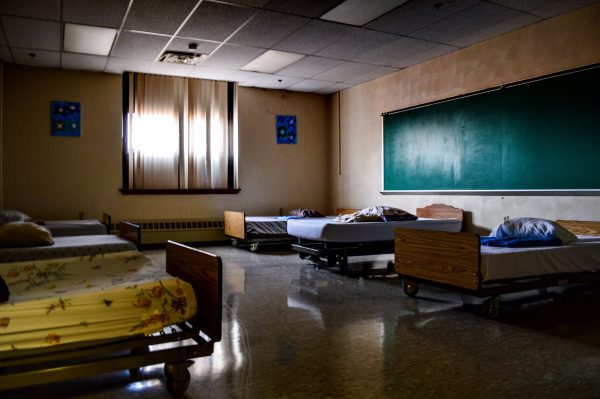 The Winter Freeze Shelter is permitted to house as many as 16 people seeking warmth and food each evening.

Anyone who lives here or is native to the Upper Ohio Valley knows this region has experienced brutal winters during which blizzards and floods have wreaked havoc in all corners of this multi-county area.

In February 2009 Ohio County endured 47 inches of snow, according to National Weather data, and the children seldom attended school; commerce activity was sparse, and all roads were treacherous far too often.

Members of the “THEM” community scattered then where they could, but state and federal regulations frequently block people in need from receiving the assistance they require. The same holds true today during a frigid December, and during the first nine days the Winter Freeze Shelter has welcomed close to 50 different guests.

“The problem with some federal programs is how they define homelessness. In a lot of cases you literally have to be on the street,” Marshall explained. “But if they find a someone who offers shelter or other forms of assistances, well then they don’t fit that definition, and although they are still homeless, they don’t qualify for the assistance and services. A lot of the people we have met already this year have told us about those issues. 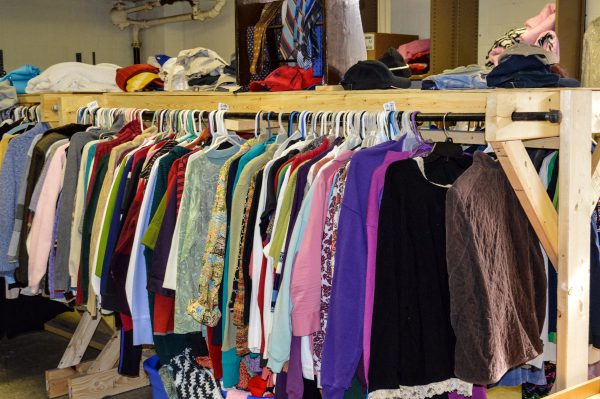 YSS now offers a store full of a number of different items and those who visit are not charged for the clothing they select.

“But those same people have no idea what tomorrow is going to look like because the help they are receiving isn’t sustainable, and they really don’t have a home. But that’s not how the federal government has defined it now, and it’s leading to many more problems,” she said. “So now it’s like a Catch 22 because they can’t fill out one of those forms honestly and still get the help that they need to get out of the vulnerable situation they are in. Oftentimes, children are involved, too.”

It is a 12-mile expanse that motorists travel through Ohio County when trekking east and west on Interstate 70, and most businesses in the Wheeling area employ residents living in Pennsylvania, West Virginia, and Ohio. But federal and state services are not so open when it comes to applying for assistance.

“This issue is also territorial because if you become homeless in Bridgeport, Ohio, but you are seeking services here in Wheeling, they are met with a wall because of the way the federal government has arranged those services,” said Virginia Loew-Shelhammer, a frequent volunteer at the YSS Winter Freeze Shelter. “Everyone knows that Ohio County is where the most services are located, whether it YSS, the Soup Kitchen, Neighborhood Center, Social Security, and so forth.”

Loew-Shelhammer is known by the freeze shelter’s guests as the “Hot Chocolate Lady” because of an initiative she provided a few years ago when local temperatures dipped into the teens in early November. She earned the nickname by traveling from place to place to find those outside, freezing, and possibly in harm’s way. During that distribution process, and while volunteering more than most, Loew-Shelhammer has learned to appreciate what most excuse as issues with “those people.” 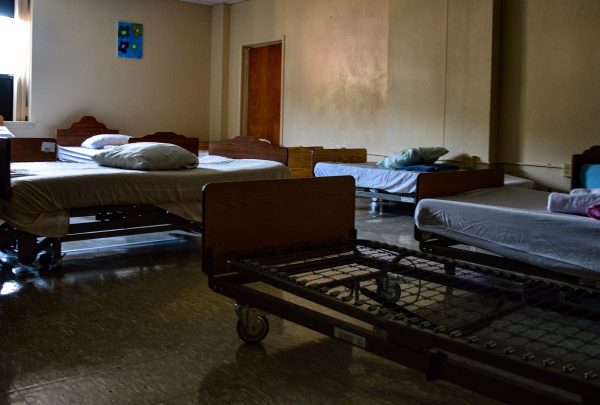 The Winter Freeze Shelter has sleeping areas for women and another for males, and opens each evening at 9 p.m. from mid-December through mid-March.

“That’s when I believe it’s up to us to share our hope for the future with them and to do what we can to change their path,” Loew-Shelhammer said. “We want them to believe that tomorrow is going to be a better day because we  here are to help them make it better. The difference is that we go beside them to battle through whatever the obstacles are. Whatever we have to move out of the way for them, that’s what we work very hard to do for them so they can finally move forward.”

It’s situated on the fourth floor of the Hazel Atlas Building, the Winter Freeze Shelter is, and that’s the same level where Moses keeps his large office that’s productively littered with information and reports concerning the extended list of child-based and adult services currently offered by YSS. Moses has devoted much of his life to a mission for mankind, and the freeze shelter serves as Exhibit A.

“And when they come here, they are welcome, they get warm, they are fed, and we take their concerns seriously,” he explained. “We will do everything possible when there is a problem that we can bring some resolution to. That’s what we do here, and what’s kind of gratifying is how surprised they are when they are met with that kind of response.

“The homelessness in this community is beyond most people’s imagination, but now there is a parade of good people who go out every week now to help the homeless. They go under the bridges, they find the tent camps, and they help any way they can,” Moses added. “But most people don’t know about that. Most people don’t want to know or even think about that.”