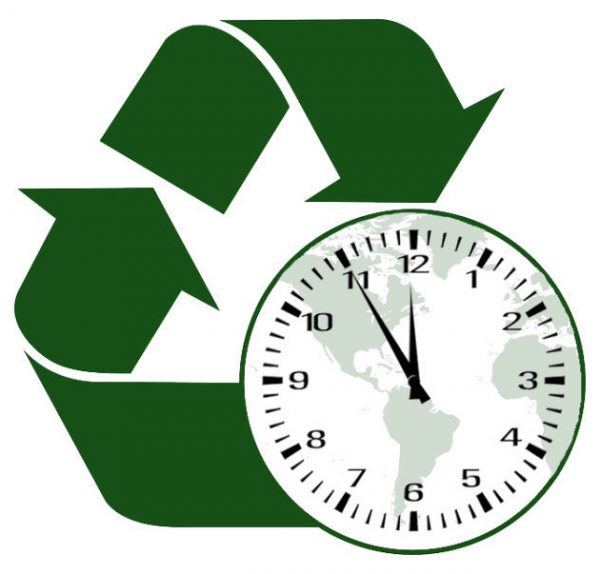 Editor’s Note: As part of the capstone to a series looking at green living in Wheeling, Weelunk set out to track a typical water bottle from recycling bins at Oglebay Park to its ultimate new life. Before this story could post, however, the shattered global recycling market prompted the shutdown of part of Ohio County’s collection program. There’s more, however, to the story. Here is a look at what’s working, what’s not and why it’s likely your empty water bottle won’t have anywhere to go anytime soon.

What happens to a cardboard box or a water bottle once it’s served out its first life? It depends. On a lot of things. Many of them happening in China, where a rapid retreat from being the world’s recycler is sending out ripples reaching all the way to Wheeling.

As of this week, that empty water bottle is headed no farther than the county landfill. The Ohio County Solid Waste Authority announced Tuesday that popular recycling bins at Oglebay Park and in the Clearview community — the only bins to accept plastics — are indefinitely shuttered.

If a cardboard box arrived in the city containing a crate of spaghetti boxes or plumbing fixtures, in contrast, it’s quite likely that box will be flattened, bundled and eventually find a second life as a cereal container. 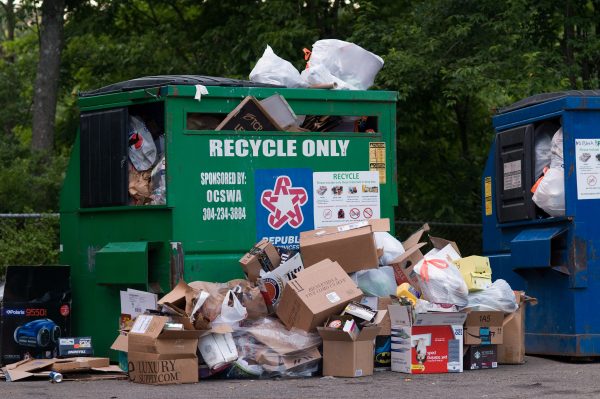 Do not pass go. This photo showing recycling bins at Oglebay Park earlier this summer is an example of why the county-level program is indefinitely suspended. Given new international standards, the presence of plastic bags alone would have been enough to get this spill-over load landfilled instead of recycled, according to Tammy Bonar of the Ohio County Solid Waste Authority. While residential recyclers upped their game, drastically cutting down on such contaminants over the season, it was not enough of a reduction to keep the current recycling model working.

Why such a difference? It pretty much boils down to money, multiple sources for this story said. Recyclables are traded as a commodity, like steel or corn or pork bellies. There has to be monetary value for there to be movement of product from point A to point B.

“Is it feasible to even do it if you’re working in the negative the whole time?” That is a question about the overall industry that weighs heavily on the mind of Tom Sustersic, general manager of Penn-Gateway Recycling of Pittsburgh.

Penn-Gateway’s particular recycling model is working, he said. Sustersic’s trucks are frequently in Wheeling, mainly picking up bales of flattened commercial cardboard from behind chain stores and industrial properties. Because there’s nothing in those bales but clean cardboard — no rogue garbage, no plastic bags, no lost teddy bears or even newspaper — there is true commodity value. 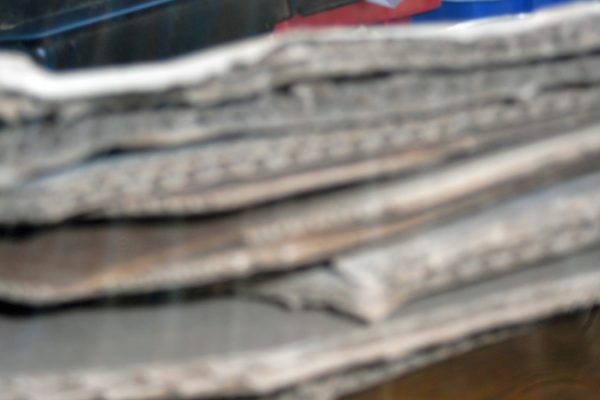 Commercial cardboard that is clean, flattened and baled often leaves Ohio County in a Penn-Gateway Recycling truck. Tom Sustersic, general manager of that Pittsburgh business, said the bales are sold as a commodity to an in-nation pulp mill. The cardboard gets turned into such things as cereal boxes for its next life.

The bales go to his Pittsburgh facility, where they are shipped to an in-nation recycling plant, he said. There, the cardboard is reduced to pulp and remanufactured into corrugated tubes, boxes and boxboard that are turned into such things as cereal containers that may eventually show up at a grocery near you. Commercial quantities of office paper, which Penn-Gateway also collects, go a similar route to be turned into toilet paper such as that sold by Kimberly-Clark, he said.

A closed loop — pure product A to marketable product B and all without leaving the U.S. – equals profit, he said. But, go much outside that loop and all bets are off.

“It’s really the plastics that are the issue,” Sustersic said. Before 2012, the recycling market was basically a “free for all,” he added. “You could ship almost anything (to China).”

As China continues to tighten its specifications of what it will accept and in what form, he said the industry push is “sort, sort, sort” — as in metals by type vs. paper by type vs. plastics by type. Is that economically sustainable outside the narrow commercial recycling that he does? He’s not sure. “It’s going to cost a lot more money to separate,” he said. “Will it work?”

Tammy Bonar is wondering the same thing. “It’s just getting to the point where you’re not going to get paid for it,” said Bonar, executive director of the Ohio County Solid Waste Authority. This week, the authority announced it will indefinitely suspend recycling collection. (A decision that does not affect curbside recycling within the city limits.)

The authority, a state government entity that has been contracting with for-profit Republic Services to offer recycling through eight bins at Oglebay Park and two bins in the Clearview community, earned only $1,000 from its recyclables in all of 2017, she said. Recently, the authority had been paying even more money out than normal just to provide recycling services. Because of the new Chinese specs, a percentage of bin loads were regularly deemed so “contaminated” with non-recyclable materials by Republic that they were landfilled, at an additional cost to the authority, she explained.

In June, 10 of approximately 100 bin loads of potential recyclables collected from Oglebay were landfilled, she offered as an example. None of the approximately 16 Clearview bin loads were landfilled that month. New signs on all the bins and a plea for help to community recyclers dropped that number of rejections down over the summer, but Bonar said it turned out that even the bins that Republic accepted for recycling were not making the grade once they got further down the recycling chain.

Wheeling recyclables were, in fact, contributing to contamination at the Greenstar division of Waste Management in Pittsburgh, Bonar said. “I would get excited,” she said about how hard area recyclers were working to meet the new standards, such as not dropping off plastic bags of any color. “I would see some containers and say, ‘Yay, this is great.’ Then, I’d go over to the next container.”

Frustrated with the shuttering, but determined to get the recycling program back up in one form or another, Bonar noted that the kind of pre-sorting that was done decades ago may be coming back. “There is a solution,” she said. “We just don’t have anything ready to go right now.” 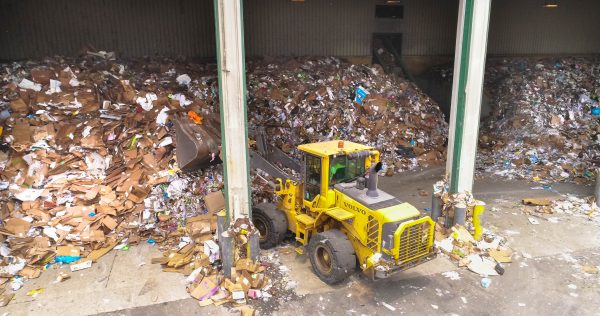 Sorting mixed recyclables is no small thing. This photo provided by Waste Management shows a tipping floor. Until this week, recyclables from accepted bins at Oglebay and Clearview ended up on such a floor in Waste Management’s Greenstar facility in Pittsburgh. From there, they were sorted by machines and by hand into type-specific bales, according to Erika DeYarmi-Young, company spokesperson. That typical plastic water bottle? It was getting baled with other type 1 plastics and marketed as a commodity. Greenstar Pittsburgh sells its type 1 bales inside the U.S., she said. But, overall, about 30 percent of American recyclables head to China for re-manufacturing.

China’s newest specifications require less than .5 (one-half) percent contamination per bale, as opposed to up to 10 percent contamination in recent years. She said sorting may allow the authority to meet that standard, even if it becomes necessary to do baling of single-type recyclables in-house instead of contracting it out.

“People did it,” she said of the day when mixing recyclables was not an option. “Single stream (mixing recyclables, as is done now) makes it easier and harder. It’s easier for the person recycling, but it’s harder to control.”

In the Thick of It

While the industry sorts itself out into a “model suited for the 21st century,” McWilliams said in an email interview done before the shutdown announcement that Republic hopes to work on dynamic contracts that are win-win for government entities and business and to focus on teaching area residents to better do their part, as well. She suggests Republic’s recycling education website www.recyclingsimplified.com as a good place for individuals to keep up with changing standards.

Erika DeYarmi-Young, a spokesperson for Waste Management’s Greenstar Material Recovery Facility in Pittsburgh, agreed residential recyclers across the U.S. are going to have to be vigilant to keep recycling solvent. That facility took Ohio County recyclables collected by Republic until this week.

Not only did China’s Operation Green Fence ban 24 materials — including bales of mixed plastics or mixed paper – in 2017, new 2018 specs reduced the contamination level in any bale of accepted recyclables to .5 or one-half percent, DeYarmi-Young said.

“As a result, recyclables from countries across the globe are looking for alternative markets,” she added, noting about one-third of U.S. recyclables still go to China. “Waste Management has built a large network of end users in the U.S., South America, Europe, India and other countries in Southeast Asia. We have been able to move material, albeit at much slower and at lower (or negative) pricing.”

To keep recycling economically viable, DeYarmi-Young said Waste Management is hitting education hard. “We have really started focusing on contamination and eliminating it at the curb,” she said.

As the recycling system transitions, she urges residential recyclers to think strategically.

“Keep it simple,” DeYarmi said of giving a recyclable its best shot at a second life. “When in doubt, throw it out.”