Editor’s note: In a continuing series about the greening of Wheeling, Weelunk moves from the eco-efforts of individuals to what area businesses — both for-profit and non-profit — are doing to be sustainable. Today, we look at Orrick, an international law firm that has become one of the city’s largest employers.

“Isn’t it cool!” Will Turani issues the sentence, more a declaration than a question, with one hand pointed toward the re-adapted, factory-strong ceiling of an office area and one foot already headed out the door.

There’s more to see. There are leg-sized bundles of cables running on open metal tracks, for one thing. They are the cables that keep the more than 300 local employees of Orrick in video-conferencing, e-communicating hum with another 2,100 or so workers that are scattered around the world. Such things cut down on fossil-fuel-burning travel, Turani says.

Another hallway. And there are the documents, or the conspicuous lack of them. 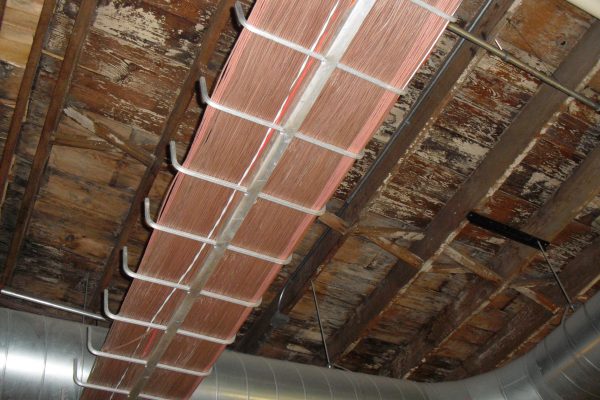 To cut down on fossil-fuel-burning travel, Orrick relies on an extensive e-networking system between its 26 offices around the world. Here, bundles of cables running on open tracks, keep things virtually humming.

“It’s a law firm — heavy laden paper. It’s what we are,” he says of the international law firm, the full name of which is Orrick, Herrington & Sutcliffe LLP. The Wheeling office serves as the company’s global operations center.

Document heavy — yet the company began an initiative to go as paperless as legally possible five years ago, said Turani, director of administration, when briefly seated. There are some jurisdictions that still require paper, he noted, so a ream remains here and there. But, even that is made from 100 percent recycled paper, the only kind the company uses. “That (the paper problem) is something we figured out early on.”

Practically down to the sheet. As part of an annual report called, “Greening the O,” Orrick workers like Turani and on-site sustainability chief Laurie Strope are tracking everything from paper to toner cartridges.

That accounting, which is shared with current and potential customers, looks at what is recycled, as well. In the Wheeling office alone, Turani said 2017 recycling kept 28,000 pounds of materials from going into landfills. That’s a saving of some 210 trees, 92,000 gallons of water, 40 cubic yards of landfill space, 5,200 gallons of fuel, according to the green report. The list goes on and on. 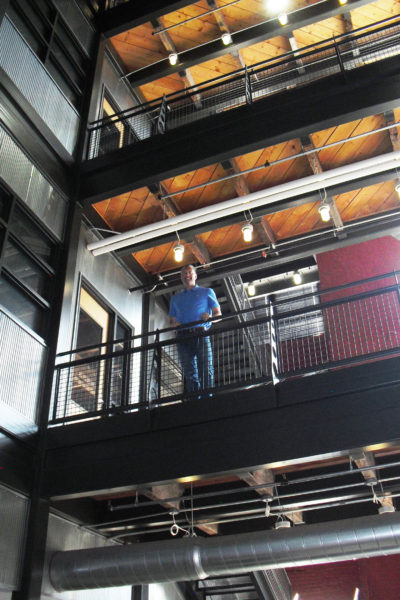 Will Turani, Orrick director of administration, looks down from an open stairway in the international law firm’s Wheeling office. More than 300 people are employed at the global operations center, which communicates with another 2,100 or so workers around the world, largely through video conferencing and e-communication in order to be more environmentally sustainable.

Turani, a ball-of-fire Weirton native who splits his work time between Wheeling and San Francisco’s Menlo Park, said the company plans on doing even more. It’s in the beginning stages of a global greening reboot, in fact.

“People get used to the program … but there are leaders who want to reinvigorate it.” In this case, he said, the leadership driving the up-greening is from London and Washington, D.C. 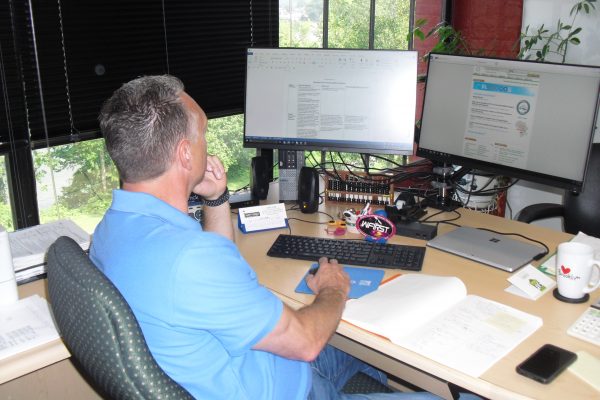 Will Turani, who divides his work time between Orrick’s Wheeling site and one in San Francisco’s Menlo Park, can access work from both locations from his office overlooking the Ohio River. A West Liberty University alum, Turani is also a former Wheeling city manager.

He acknowledged that sustainability is easier in some Orrick locations than others, however. For example, when he is working in California, there are so many, many bins — landfill, various forms of recycling, composting. Yes, composting — of lunch leftovers and whatever other organic things that can be kept out of a garbage can. The sustainability infrastructure there is simply stronger.

Yet, Turani sees plenty of green potential locally. “Just what we do in Wheeling,” he noted, “If (other) people would follow suit. …”

He added that such practices are more than just responsible corporate citizenry, which is part of what caused the business to be included in the Fortune Top 100 Places to Work for the last three years.

“(Sustainability) is important to the firm, but it’s important to our clients, too. … It is important to everyone,” he said. “That’s why we want to be a step ahead of the game. There’s not a client in this world that doesn’t ask for that information.”

Even if sustainability somehow became an economic negative, it has become such an integral part of Orrick culture he doesn’t see any departure ahead. “I don’t ever see our initiative going away. If anything, it will move forward.” 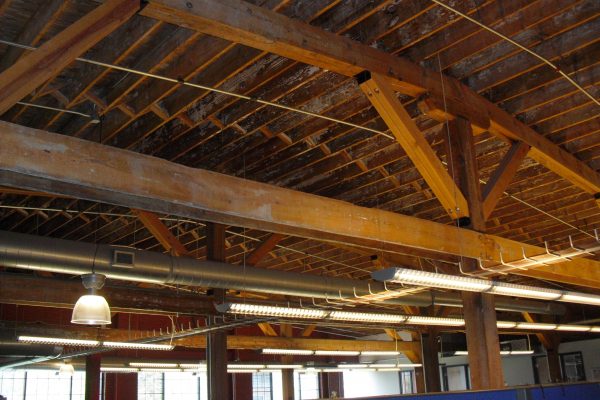 Creative re-use is also in play inside. Throughout the 88,000-square-foot office space, which re-opened as Orrick in 2002, the factory’s strong bones still shine through. Here, ceilings built to last become a design element for a new generation of workers. The beam motif is repeated throughout the office with partitions made of sustainably sourced wood per company policy. In locations where the international law firm requires new buildings, they are built to the highest sustainability standards, also company policy, Turani said.