Oglebay Institute’s Towngate Theatre ends its 50th season of community theater with Thornton Wilder’s Pulitzer Prize-winning masterpiece “Our Town,” considered by many to be greatest American play ever written. 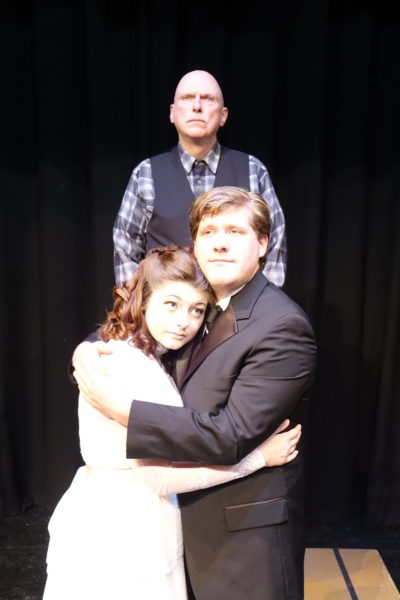 John Reilly, back, plays the part of the Stage Manager, who guides the audience through the town and introduces its inhabitants. Aimee Kefauver and Noah Hilton play Emily and George, the two young people who grow up together over the course of the play.

With its poetic beauty and simplicity, “Our Town” illuminates the powerful bonds that hold communities together through everyday life and moments of crisis.

With humor, wit and powerful storytelling, the play follows two ordinary families — the Gibbs and the Webbs — through life, love and loss in the fictional small village of Grover’s Corners.

Told as a “play within a play,” the stage manager narrates as we follow the residents of Grover’s Corners through 12 years of life changes — from the mundane in Act I, “Daily Life,” to the romantic in Act II, “Love and Marriage,” to the devastating in Act III, “Death and Eternity.”

Although written in 1938, “Our Town” remains relevant today, said director Tim Thompson, because it delivers “universal truths about what it means to be human.”

Thornton Wilder said, “I regard the theater as the greatest of all art forms, the most immediate way in which a human being can share with another the sense of what it is to be a human being.”

Thompson said “Our Town” embodies this quote. “It is performed by human beings for human beings about human beings — about who we are and what makes our lives significant. It is about our daily life — our ups and downs, ebbs and flows, good times and bad. Audiences will closely identify with this story, its characters and its message.”

The play is performed without a set on a mostly bare stage. With a few exceptions, the actors mime actions without the use of props. Thompson said the minimalist surroundings inspire the imagination.

“The narration by the stage manager describes what things look like and the audience is engaged by trying to picture the places in their mind’s eye. These can be different for each individual and possibly even remind them of their own homes. Also, it’s part of the theme that the most important things in life aren’t house or things.”

Playing the part of the Stage Manager, who guides the audience through the town and introduces its inhabitants, is John Reilly. Aimee Kefauver and Noah Hilton play Emily and George, the two young people who grow up together over the course of the play. Vincent Marshall and Rachel Thompson play Emily’s parents, Mr. and Mrs. Webb. George’s parents, Dr. and Mrs. Gibbs, are played by Justin Swoyer and Dee Gregg.

“We have a stellar cast and crew,” Thompson said. “The Ohio Valley is chock-full of talented actors, and this show has some of the best. Also, they are all doing many backstage facets of production, along with our seasoned technical crew. It is a true community effort. I am very fortunate as a director to be able to work with this elite cast and crew.”

This is the final play in Towngate’s 50th season, which is sponsored by Unified Bank.

Tickets can be purchased in advance at www.oionline.com or by calling 304-242-7700. Tickets can also be purchased at the door, if available. Box office opens one hour prior to curtain.