You may not be able to see IT or smell or feel IT, but IT is there, and IT will make you ill for an extended period of time.

IT is the blue-green algae that first surfaced in the Upper Ohio Valley in mid-August, and because of recent weather conditions and a lack of precipitation the toxic substance remains a threat to anyone wishing to come into contact with the waters of the Ohio River.

Howard Gamble, administrator for the Ohio County Health Department, said the warnings and suggested precautions remain in place this weekend. 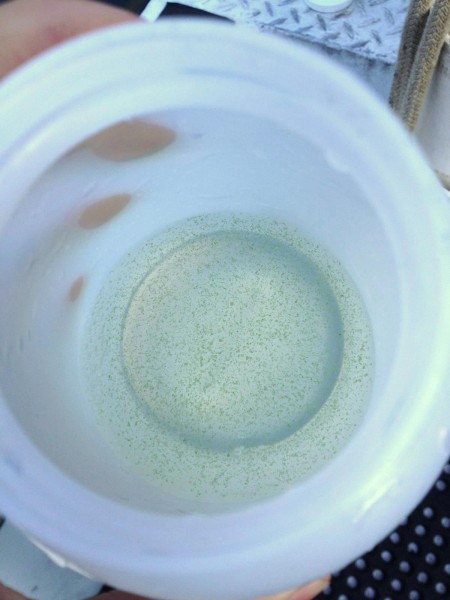 With assistance from the Ohio River Valley Water Sanitation Commission (ORSANCO), water observations and water samples have been taken daily to keep local residents as informed as possible.

“It is still there, but when you are on the open water, it is hard to see because you’re not going to see a slick,” Gamble explained. “It’s not like the algae we see on our creeks and streams because the algae in the river doesn’t get clumpy. But it is still out there.

“Some of the most commonly occurring cyanobacteria in Ohio waters include: microcystis, anabaena, pseudoanabaena, planktothrix, aphanizomenon, and cylindrospermopsis. True algae and cyanobacteria are very different organisms and therefore should not be treated the same. There are no known harmful toxins released by dying true algae.

“Cyanobacteria, however, can contain harmful cyanotoxins within the cell wall which may be released during cell growth or death.  Some species of cyanobacteria can produce cyanotoxins, including neurotoxins (nervous systems), hepatotoxins (liver), and dermatotoxins (skin irritant).  Monitoring for cyanotoxins in Ohio is currently focused on the most prevalent cyanotoxins where reliable analytical capabilities exist, including microcystin, cylindrospermopsin, saxitoxin and anatoxin-a. 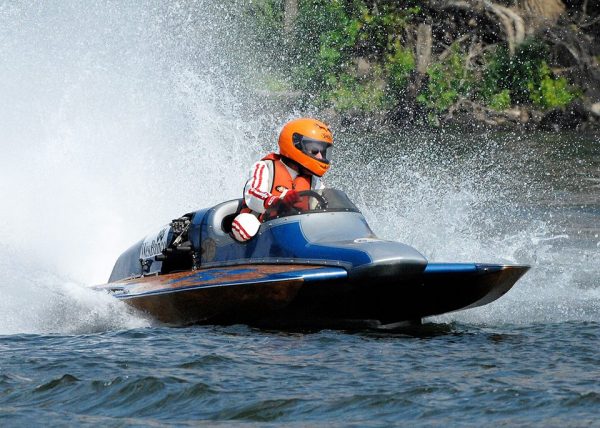 The 10th annual Wheeling Vintage Raceboat Regetta is set to begin this Saturday. Health officials have confirmed that spectators of the exhibition heats are in no danger of exposure to the blue-green algae currently present in the Ohio River.

“We had slick of the blue-green algae on the 18th of August that was located behind the Pike Island Dam, and it is something that we have never seen before,” Gamble said. “It is described as having a toxic factor in it, and that’s the difference. Water treatment plants up and down the river deal with algae all of the time, but this is different because of the toxic factor.

“What we believe happened was that we had a lot of rain, and that caused more runoff than usual from sewage and storm drains, farms, fields, and small streams, and it all flushed out all at once,” he continued. “When it backed up behind the dock and dam system, it turned into a blue-green algae material.”

“I have no evidence right now to say that might be the case,” he reported. “We had the weather event; then we had the algae. If someone were to say that it’s probably the result of X, Y, and Z, then we would have to ask why that hasn’t been occurring more regularly.”

The city of Wheeling constructed a new, $35 million water intake facility in the Warwood section of Wheeling, and the plant began operation a little more than a month ago. Gamble, however, said it was the facility’s staff that made more of a difference than has the new plant.

“I can tell you that we are blessed to have the staff that we have working there,” he said. “They have a really good staff assembled there that’s been able to handle this situation. The first thing that they did was to shut the intake off and go to work to assess the situation. 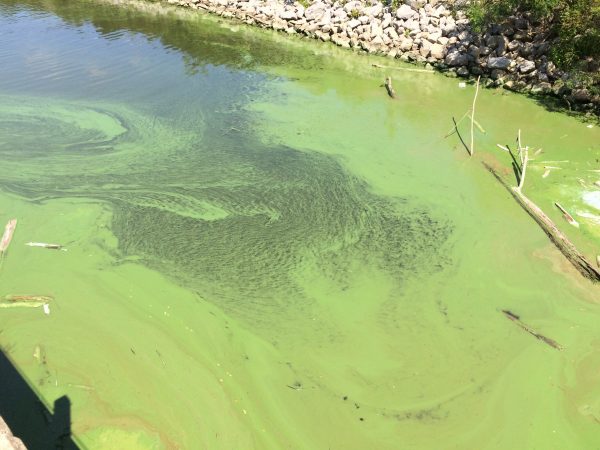 “What they discovered is that the algae is basically on the top of the water, and it is present only about eight inches deep, but the intake for the water plant is much lower than that sp it’s not taking in the algae,” Gamble continued. “From the lessons learned and from speaking with officials at others plants, they discovered that they could work with it and they could treat it as it is coming into the plant and as that water is being prepared for delivery. At this time, the plant is running normally. It is safe to drink, and it is being monitored.”

Officials of the Ohio County Health Department issued a similar warning for this weekend as they did when the blue-green algae was initially discovered two weeks ago:

“The algae, at high concentrations, can cause health problems such as skin irritation, eye irritation, or intestinal illnesses.

“Anyone who may be experiencing symptoms related to exposure to blue-green algae, including stomach cramps, diarrhea, vomiting, headache, fever, muscle weakness, or difficulty breathing, should contact their health care provider, particularly if they have been in contact with Ohio River water.

“Other tips to avoid becoming ill from contact with blue-green algae include the following: 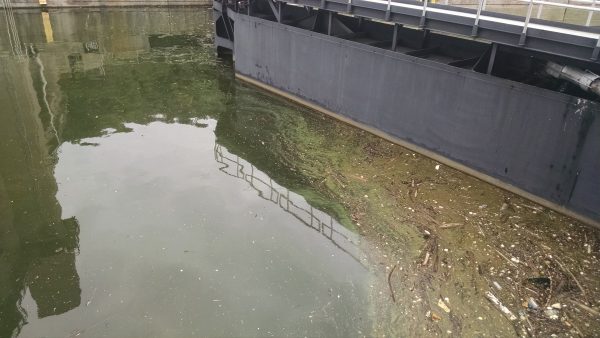 Evidence of the blue-green algae has been seen regularly near the Pike Island Locks and Dam.

“Our bigger concerns deal with swimming in the Ohio River and bathing in it because this issue concerns ingesting the water and the algae,” Gamble explained. “We are also concerned with the activities that could result in a person ending up in the river because when that happens, you likely will take some of the water into your person or in your eyes.

“If that happens you’re probably going to feel pretty lousy for a while,” he said. “It is also important to keep you pets out of the water, too, because it will have the same adverse effects on them, too.”

Gamble also advises that if people insist on engaging in recreational activities on the Ohio River or near the waterway’s tributaries while the blue-green algae is still present, they should do everything possible to minimize their exposure as much as possible. 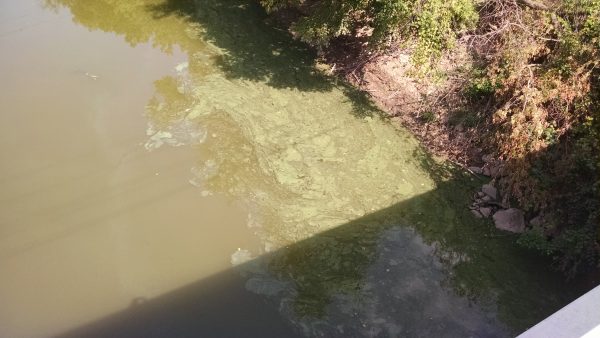 The toxic algae has backed up short distances inside the tributaries of the Ohio River.

“Every precaution that we had in place last weekend is still in place this weekend, and that means we strongly encourage showering off immediately and then using the sanitizer – in that order – and washing those clothes. Washing off the boats or the jet skis is also important because you’ll be handing those things.”

“The algae has been coming down the Ohio River, and in some areas the algae has backed up into some of the tributaries, but not that far into those creeks and streams,” Gamble said. “The further you go up the creek, you no longer see the algae at all.

Lou Vargo, the director of the Ohio County Emergency Management Agency, has had extended conversations with officials of the National Weather Service in Pittsburgh. While some believe, he said, that a heavy rainfall may flush the algae downstream, the possibility does exist that such a weather event could produce even more of the blue-green algae because of the low levels of local creeks and streams.

“It would make sense that another large rain might do that, but what another big rain could also do is add to the current problem,” Vargo explained. “It just may cause more of that algae to come down again.

“I have never seen this situation during the years I have been with the EMA here in Ohio County, and the lockmaster at the Pike Island Dam has never seen it during his career either,” he continued. “He has told me that while we do have algae on the river all of the time, he’s never seen it to this extent, and it’s never been toxic.”