Pinched off water lines and undiscovered water and sewer lines have been the primary cause of the delay involved with the storm sewer separation project along Main Street in downtown Wheeling, but has a tunnel system wreaked havoc, too?

Long the legend has been that caverns are present under the streets and structures of Main, Market, and Chapline streets, and it’s a tale that City Manager Bob Herron heard soon after his arrival to the Friendly City in 2001. Were they utilized, as Herron was told, by past downtown business owners to transport the goods received in the late 1880s at the riverfront?

Did “Big Bill” Lias and members of organized crime organizations hide hostages and stolen goods deep beneath, or were the tunnels used as avenues for the local Underground Railroad?

The streets of downtown Wheeling have been excavated frequently during the past several years thanks to the effort by AEP to bury imperative infrastructure, the construction of the new Health Plan headquarters, and because of water main breaks, so the perfect person to ask is Wheeling City Manager Robert Herron, right?

Depends on what one wishes to hear.

“No evidence of a tunnel system under downtown Wheeling has been discovered during any of the underground projects that have been taking place the past few years,” Herron said. “I’ve heard the same rumor, and the theory I heard was that it was created when people used to offload goods at Heritage Port for the downtown businesses back in the 1880s. 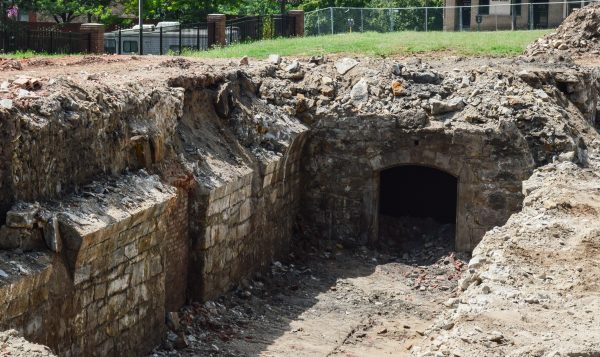 A total of three underground vaults were unearthed on the property where The Health Plan project has been taking place the past 18 months.

“But no evidence to validate that theory has been uncovered when these vaults have been found or during this separation project on Main Street,” he said. “When I first heard it, it made sense because of the long history of this city and the kind of businesses that were here for a lot of years. Now, there’s plenty of things down there, and the contractor working on Main Street has uncovered a few surprises.”

When it comes to history in the city of Wheeling, the concentration has always been on the buildings, the cemeteries, and what was where when the city was most populated by people and businesses. But what lies beneath what we see in the municipality can prove a mystery, and that is exactly what has delayed the storm sewer separation project along Main Street in downtown Wheeling this past year. Expected to be completed by last August, the separation project will now continue into next year, according Herron.

“Last week there was a really good day for that project because they were able to install about 40 feet of pipe,” he explained. “In normal circumstances, contractors would be able to get 100 to 120 feet of pipe into the ground, but this separation project has turned into a very difficult project. 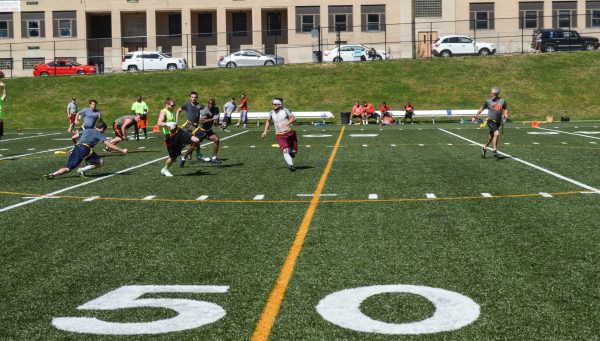 During the construction of the J.B. Chambers Recreation Park, grave stones and remains were unearthed from a former cemetery once located beneath the East Wheeling land.

“We knew there would be challenges, but there were a couple of things that we didn’t know,” Herron said. “We didn’t expect the big delay at the intersection of 14th and Main streets, but that was caused by the depth of the thruster blocks on the water lines. Those are in place because elbows in water lines have to have something that pushes it forward, and it’s a 30-inch water main under there that was installed back in 1989.”

So, while evidence of secret passageways has yet to be revealed, plenty of myths and mysteries have been unearthed that have revealed how city government and the private sector approached and managed growth and decline during the past 150 years.

“On some properties in the downtown, buildings have been constructed and demolished a few times, and as those buildings came down, water and gas lines were not properly shut off. Plus, there were sewer lines that were under there that we were unaware of,” Herron explained. “They did hit several old water lines because we didn’t know they were there, and that’s because, many years ago, they would just pinch the line instead of removing them. 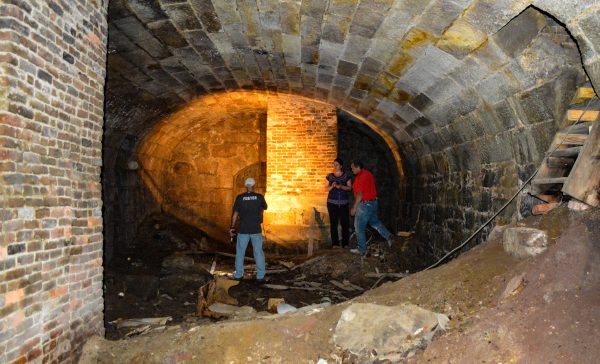 This large vault was discovered several years ago beneath a Wheeling Island home near Golden Chopsticks on the north end.

“The stuff that is underneath Main Street has caused a lot of problems, but that’s because Wheeling is a very old city, and this downtown area has been in re-development a few times in history. It’s not something we could have ignored either. It all had to be fixed,” he said. “The contractor has brought out a lot of debris from under the street ever since it started at 16th Street.”

As historians in the Wheeling area have confirmed, an extensive trolley system was established in and around the Friendly City in the late 19th century, and the cars continued to run for several decades before being abandoned in favor of automobiles. In some cases, it’s been determined, the once-busy tracks were left in place and simply were paved over.

“We also have trolley rails all over the city of Wheeling,” the city manager said. “Trolleys were once a very big part of mass transportation in this city. Right now, the water lines from downtown to South Wheeling are directly below the old trolley rails, and we believe that those rails have increased the life of those lines. 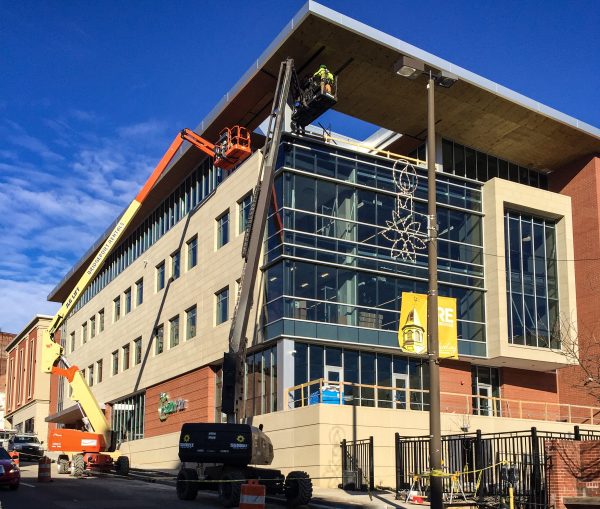 Employees of The Health Plan began the process this past week of moving into the insurance company’s new headquarters in the 1100 block of downtown Wheeling.

“If it was a decision to make today, the trolley rails likely would be removed because of the scrap worth now, and, as most people in Wheeling know now, the contractor of The Health Plan project uncovered a total of three vaults in the 1100 block in the downtown, and recently another vault was found under one of the buildings the city owns near the intersection of 14th and Market streets,” Herron said. “No one seems to know where all of these vaults are in the downtown, so it’s anyone guess what could be encountered during any other new building projects. Gas lines, water lines, sewer lines, there’s a lot of stuff under that ground.”

The storm sewer separation was required because of new storm water standards established by the Environmental Protection Agency, and the effort, the city manager said, will continue over several years in order to achieve complete compliance. Once this Main Street portion is completed, more new development can take place without worry.

“This installed pipe will not only be able to handle storm water runoff from The Health Plan, but it would also be able to handle the same from any other new buildings that we hope are constructed on the three sizeable, cleared lots along Main Street,” Herron said. “We are hoping that the owners of those lots will develop them in the future.

“Without this project, no new buildings could be constructed without a new sewer separation being installed,” he said. “I know it’s been a long project, but once complete it will benefit that part of the city for another 100 years.”