For years departure was the only real option for many so they could seek their own version of the American Dream as close as possible to what their family achieved while living here in the Upper Ohio Valley. The men worked in the offices, factories, mills, and mines, and the wives raised the children, cooked the meals, tackled the housework, and served as the house nurse, too.

That same family framework stayed true up until the 1970s, when the inflation rate changed the American economy forever because Mother had to go to work, too. It worsened in this region with the deaths of glass, toys, and coal, and then the decline in the steel industry began in the mid-80s until the bankruptcy of RG Steel, the former Wheeling-Pittsburgh, was finalized late last year. Pretty much only the coke plant in Follansbee remains operational, and it is owned by AK Steel at this time, but manufacturing along the Ohio River, from Steubenville to New Martinsville, is at a mere whisper compared the constant hum 50 years ago.

People once prospered here, a few more so than the masses, but overall there was money made and spent, and the quality of life was solid.  A lot of people left here, however, and that’s why, ever since the Friendly City’s downtown district was reduced to banks, doctors’ offices, and law firms. There has been a “this-city-sucks” conversation that has dominated the “Wheeling Feeling” for decades. 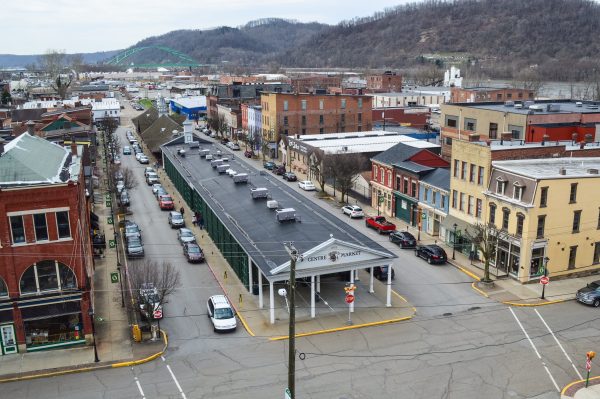 The Centre Market area has realized much growth during past few years, and more is expected in the months to come.

It seems to be changing, though, insisted Wheeling Mayor Glenn Elliott.

“It is absolutely great to see people want to fight for a future of Wheeling. It wasn’t too long ago that people were really focusing on what was wrong, but that’s what got us to the point to where now it’s about ideas about how to improve what’s wrong,” he said. “It’s exciting because it’s contagious and because we’re seeing new development in the downtown district.

“I’ve also had a lot of conversations with people about when, not if, but when they are going to invest in Wheeling. They are waiting for the right building to go on sale, or they are waiting for the right business opportunity,” Elliott continued. “It’s incumbent for us as a city council to take all of this energy and channel it toward the most productive uses, but we are only a piece of this puzzle, and it’s going to take a lot of pride and investment.”

There is a collective conversation taking place now, and the best news is the fact it’s an inclusive discussion not centered on the black-and-white but instead on the digital-now. 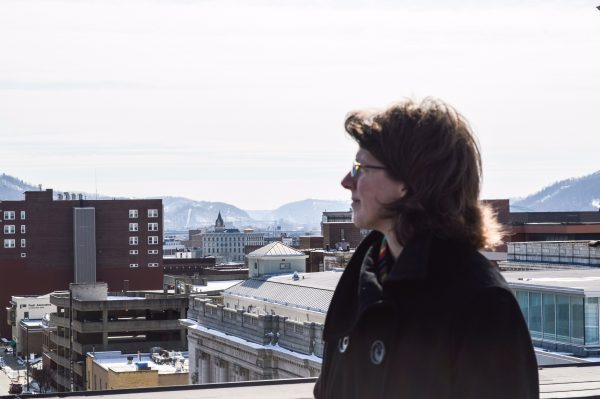 Ward 4 Councilwoman Wendy Scatterday looks over the Friendly City’s downtown district from atop the Wheeling YWCA building on Chapline Street.

“I think we are entering a period of time where for the first time in my lifetime people are talking about the present and future of Wheeling rather than about the past of Wheeling, and I am not being critical of those who talk about the past because this city’s past is a remarkable history,” Elliott said. “But I also believe that the nostalgia became a crutch for a lot of people, and that turned out not to be a good thing.

“But now the conversations I’m hearing are about the present and the future of the entire city and whether to invest in this or that,” he reported. “There’s a lot of talk about the buildings in the downtown and a lot of conversation about buying one of the older houses we have here. There are problems, of course, but now there’s more talk about the solutions. I think people are convinced that brighter days are coming, and that’s important because that has a great effect on a person’s psyche.”

Soon after he was elected mayor of Wheeling, Elliott decided to form four ad-hoc committees he instructed to concentrate on separate-yet-intertwined issues: the obstacles to gaining population; the future needs of a reinvented, industrial region; what it takes to attract housing developers in city limits; and how to harness and direct those who wish to volunteer for local non-profits. 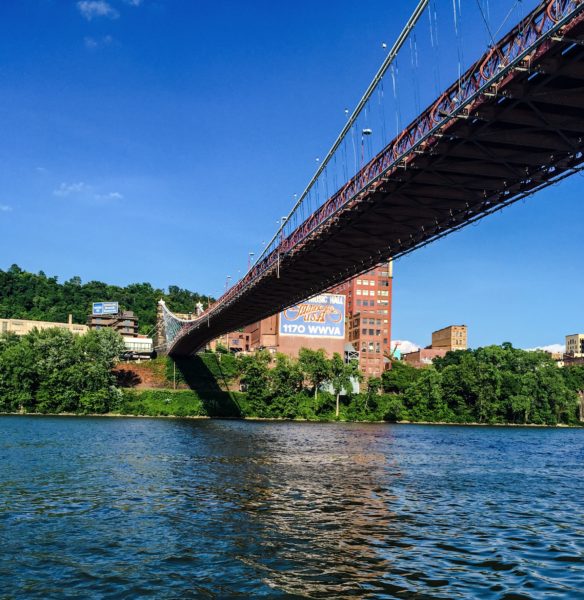 One conversation that will continue in the city of Wheeling concerns the future of the historic Wheeling Suspension Bridge.

Retaining those graduating from Wheeling Park, Linsly, and Wheeling Central Catholic is imperative, the mayor acknowledged, but recruiting those who have abandoned the city for greener grounds also is part of the puzzle. Along with Elliott, two current council members, Ward 1’s Chad Thalman and Ward 4’s Wendy Scatterday, have resided for more than a few years outside the valley region.

“While I was in Washington, D.C., I worked for a big law firm, and a lot of people thought I had the dream job and a dream life, but in the end I wasn’t a part of my community there. I was just going through the motions, but then I came back and immediately got involved with things,” he continued. “And people really appreciate the fact that you care about your community. That’s why I think a focus on bringing people back is just as important as a concentration on retaining our young people.” 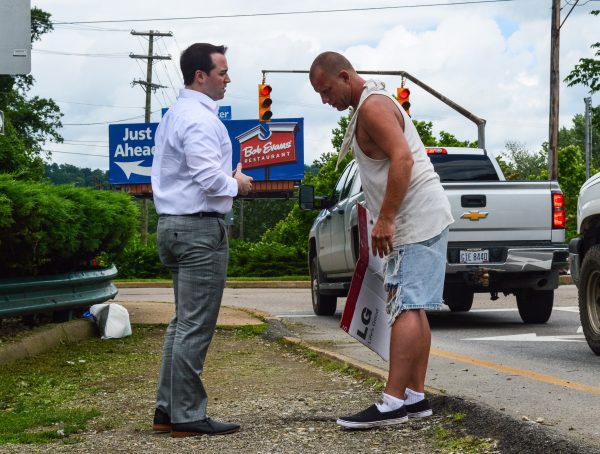 After being presented with concerns about panhandling in the Friendly City, W.Va. Del. Shawn Fluharty went to the intersection near Perkins Restaurant to speak with those soliciting donations.

“Of course, this city needs more good jobs so we can retain people and can attract people to come back. We have a lot more now than we did when I was 18, but there’s always that need for more,” Elliott acknowledged. “But during a meeting I had with the city manager and with the operations manager of Orrick, Wil Turani, I realized that there are a lot of professionals who work for that law firm who have chosen not to live in Wheeling. Jobs are important, but it’s not just jobs.

“There are a lot of people who want to live in urban areas; they want to live in downtowns, and they want to walk to work, but right now Wheeling remains a tough city to get around in, and it’s also a challenge to find the right kind of housing that those professionals want,” he said. “City Council has a mission to bring more jobs to Wheeling, so I want the Retention Committee to think about everything else too, other than more jobs.” 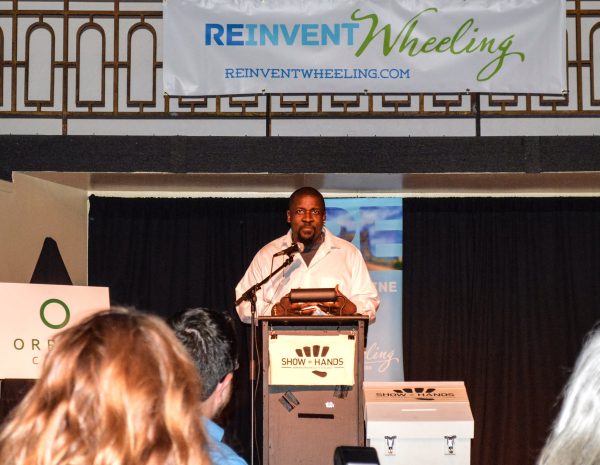 Ron Scott Jr., a local activist and founder of the Ohio Valley Hip Hop Association, participated and was victorious in a Show of Hands event.

Employment opportunities, appropriate housing, and, finally, an increase in population are the three aspects that remain variables in the revitalization of downtown Wheeling. Few believe Main and Market streets will ever return as the retail Mecca they once were for the entire Upper Ohio Valley, but eateries and entertainment might be two areas that could realize popularity day and night, the mayor believes.

“There are three very important things, and no one knows what could take place first. Is it the jobs, the affordable housing, or the people?” Elliott said. “I do believe that once the Boury Lofts building is completely finished and full, downtown Wheeling will have the population density that will attract a grocery store somewhere in the district. That’s a big piece of the puzzle in terms of making the downtown more livable.

“We need to get to the point of density, and I don’t know what that number is. I believe we need the bodies here first, though, before the development starts revolving around that influx,” he continued. “I also think once the Health Plan opens in the 1100 block and we have nearly 400 new people working in the downtown, we’ll see the private sector react accordingly. But the magic words are ‘density level.’” 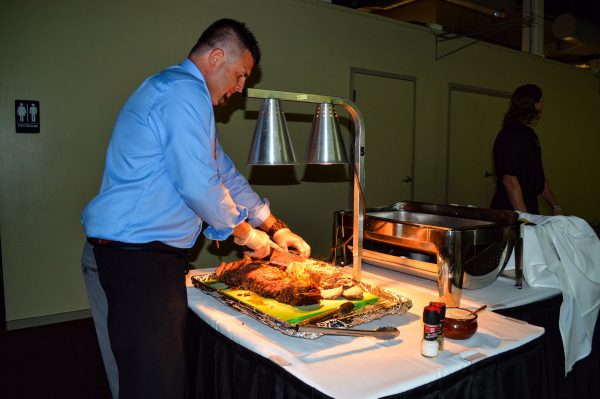 Jason Miller, one of two owners of River City Restaurant and Banquet Center in downtown Wheeling, carves the prime rib for a recent wedding reception.

Elliott, a 1990 graduate of The Linsly School who returned to the Wheeling area seven years ago, did not plan on becoming the Friendly City’s mayor when he tendered his resignation to law firm Baker Botts in the nation’s capital to move home. He came home to find himself and his purpose, but this wasn’t part of the plan although making a difference has seldom been something Elliott has avoided.

“I treasure the time that I spent away from Wheeling, and I treasure my time being back here because it’s exciting for me to once having been a kid here and now to play a small part in its renaissance and revival,” Elliott said. “I can’t say it’s a dream that I ever really had, but it is a dream-come-true in many respects because it’s so satisfying.

“There’s a chance for people to be relevant here and to have an impact here instead of being a nameless, faceless person somewhere else,” he opined. “You have the chance here in Wheeling to change the reality and not just blend into the background. I know a lot of people who have come home have found that.”