There’s nothing like running a website that encourages people to do things to make one realize that they don’t do enough. So last Sunday my family and I traded our Honey Bunches of Oats for a brunch on the town, at the Vagabond Kitchen. I’ll admit that I didn’t know they served a Sunday brunch until owner Matt Welsch submitted it for inclusion in our calendar, but the whole family loves brunches in general for their combination of breakfast food and not having to get up at dawn to eat it. Speaking of which, this is probably a good place to come clean about a few things:

– I’ve never written a restaurant review before, or a food review, or a review of any kind actually

– I have the epicurean resumé of a caveman. I like meat and cheese, and will tolerate some bread or a fork so my hands don’t get too greasy

What I’m saying is, take this review with a grain of salt.

After parking the car on the street about a 30 second walk from the front door, we were greeted by a chalk sign on the sidewalk confirming that there was indeed a brunch being served from 10 until 2, and as an unexpected bonus we were to be treated to live music by Sean Decker. Inside, the Kitchen is to the left and down a half flight of stairs. Nomenclature alert- I’ll call the dining room the Kitchen and the kitchen the kitchen. Don’t blame me, I didn’t name it. I never went in the kitchen though so I shouldn’t need to mention it.

Seating is open, so don’t stand around waiting to be seated like we may or may not have done. There aren’t many tables and none seems to be better than the others so just pick one. There’s only one high chair for babies so you should be prepared to hold Junior on your lap or bring a stroller, because someone else probably got it already.

Once you’ve got all that hard stuff figured out, don’t even sit down- just go get a plate and fill it up. Absolutely do not miss the deep-fried french toast with powdered sugar and maple syrup. You could stop there, but don’t. Grab some biscuits and gravy, sausage, bacon, and fresh fruit. Your plate will be overflowing but don’t worry, you can go back. There are some dishes more toward the lunch side of the brunch spectrum, like ham and bean soup last week. But as I mentioned I’m a breakfast guy. 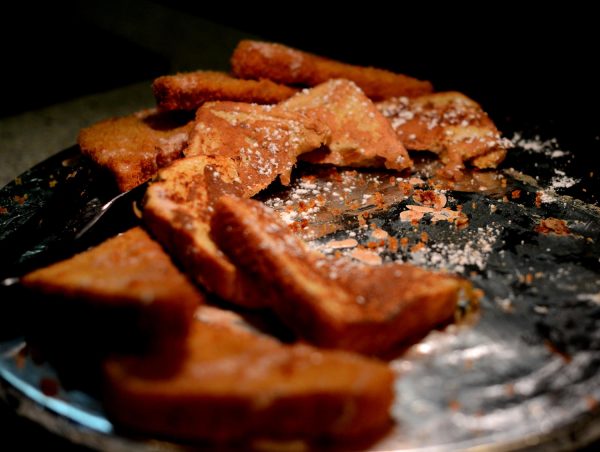 About this time Sean started to play at the far end of the Kitchen. He started out with Laid by James, a seldom-heard classic that only heightened my appreciation of the fact that I hadn’t stayed home for breakfast. He followed with a series of alt-rock songs both popular and obscure. I tuned out the family and concentrated on the music while I ate. 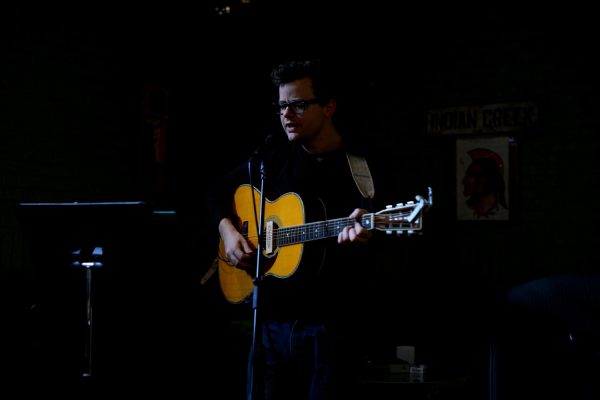 Some good friends came in and sat at the table next to us, and our greeting allowed my food to cool a bit. But no excuses need be made- the fried french toast was crispy and buttery and sweet, and the bacon and sausage were a perfect match for it. Everything was so fresh and real, as if my mom- no, my grandma- had made it. I stuffed myself and didn’t even get to sample the desserts.

There was more good news on the way out – the bill is only $12 for adults and $6 for kids. This would increase considerably if you added one of the exquisite Robert Villamagna mixed media artworks for sale on the walls, but you should consider doing so anyway.

At this point you may be asking why there was a $12 rock concert in my grandma’s kitchen. If that proves true of a significant portion of our readership, I’m not going to write any more restaurant reviews. But if I managed to get my point across, I may end up waiting for a table for even longer this Sunday because the Vagabond will be the most crowded spot in town.