You viewed it right.

And those who crowded his restaurant Wednesday evening had the chance to win it with him.

He faced chefs from much larger cities than Wheeling; he prepared a decadent mac and cheese in round one and his signature pork chop with sautéed vegetables and mashed potatoes in round two, and in the end, Matt Welsch collected $20,000 after the shopping challenge.

His motivation? The Vagabond Chef repeated several times, “I just want to make a positive impact on my community. That’s all I really want to do.”

Introduced as a motorcycle enthusiast who owns an eatery in a struggling downtown in Appalachia, Welsch was challenged with $40 to spend on two courses in an episode titled, “Budget Wars,” with a chance to win as much as $20,000. They found Welsch on Instagram, and that is why he decided to broadcast his viewing party from the corner of 12th and Market streets on the same social media platform.

“It all came together very quickly after they found me on Instagram, and I had very little time to get prepared for it, but that’s where Chef Chris (Kefauver) from West Virginia Northern Community College came into play,” Welsch said. “He helped me tremendously as far as my preparation was concerned because, as a restaurant owner, there’s so much more to it than just the cooking. It was all very humbling; it really was. 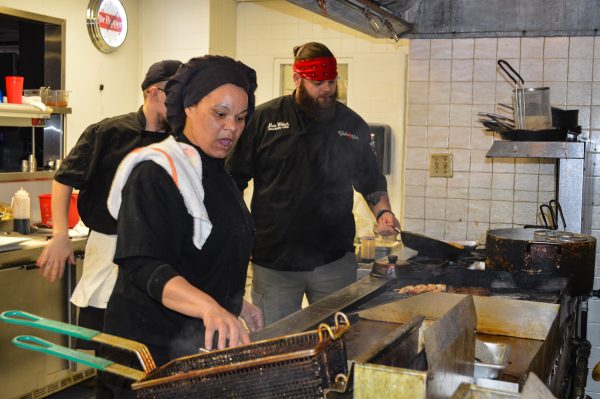 Although he doesn’t get into the kitchen as much as he wishes, Matt Welsch did assist his talented staff Wednesday evening before the eatery’s viewing party.

“When I opened my restaurant, one of my goals was to be on the line making great food, but it was the first time I owned a place instead of just working at a place, so that was a major change for me,” he said. “I found out very quickly I couldn’t do both, but the ‘Grocery Games’ gave me the chance to get back in that zone. It felt really awesome, and it was so difficult not to say anything to anyone about the end results.”

The first round was all about “guilty pleasures,” and while one of his three opponents opted for spicy wings and another chose a patty melt with hash browns, he and a 19-year-old competitor prepared their own versions of mac and cheese. Welsch included a variety of cheeses and topped the dish with fried bacon, while the other utilized turkey bacon instead of the pork version.

That was a deciding factor with the three judges, including Aarti Sequeira, Marc Murphy and Robert Irvine.

His second round was an pork chop entrée, and Welsch plated his dish for nearly $20, while his opponent countered with spicy shrimp tacos with Pico de Gallo.

“I went with what my customers love the most in our downtown Wheeling location, and wow, did the judges approve,” he explained. “You know, maybe it’s a shame that my face is the face that represented the city of Wheeling and the state of West Virginia, but I did my very best to do what I was able to accomplish. 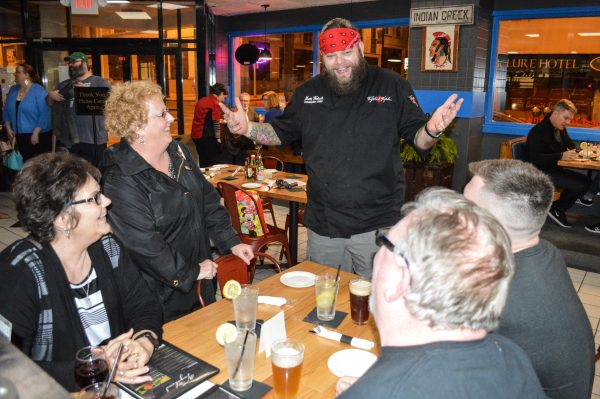 Customer after customer asked the Vagabond Chef what the results were from the national show, and this was Welsch’s reaction each and every time.

“I don’t know how this will benefit me in the future; I really don’t, but I am really happy that I was able to represent this city and our state well with winning it,” Welsch said. “I wanted to make everyone proud when I went out there to California, and I hope that’s what I did. I’d love for the host, Guy Fieri, to come here to the Vagabond Kitchen so he can try a lot of the other things that we’re offering here.”

Is Welsch a future television star?

“Oh man, who knows the answer to that question? I mean, I think it would be fun to do something with the network, but when I wake up tomorrow, I’ll just go back to fighting for my restaurant the same way I have every day since we opened at this location more than a year ago,” he said. “Could this be a launching pad? I really have no idea.

“Right now, I think the sky is the limit, but that’s not my decision,” Welsch added. “But now I just hope this benefits our community, my family, my staff and our customers in some way. Right now, I don’t know what can all happen, but I’m not really sure how any of this happened, to be honest. But I am very thankful, and I look forward to tomorrow just like I do every night when I hit the sack.”