Search
Home
Ideas
The naked ladies were a bit of a stretch, but if there were ever a church that could cope with Art Nouveau statues in its “sanctuary,” the Vineyard would be it.

“We Photoshopped Hawaiian shirts on them,” lead pastor Chris Figaretti said of a humorous moment that arose when talking through the move to downtown’s The Capitol Theatre with his congregation.

“But, I looked more closely at them, and they’re actually wearing sheets,” he added with a chuckle. “I told people, ‘Just don’t look up.’”

Not that many would.

The Vineyard even brought a lot of its own equipment on board to make sure The Capitol Theatre’s sound and light system could accommodate such a thing.

“We’re partners,” Figaretti said of the now 40-year-old church moving the majority of it services downtown. “(It’s been) nothing but good.” 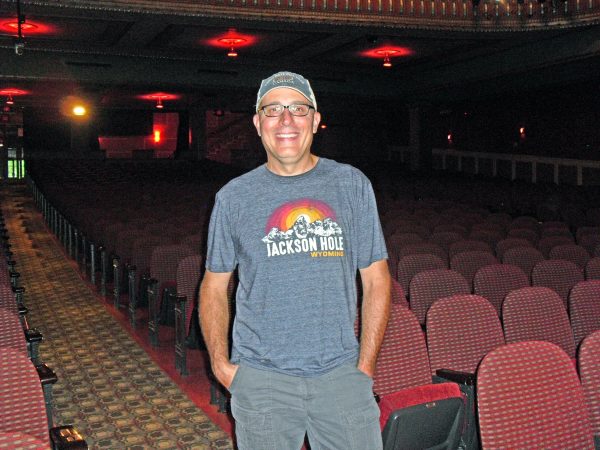 That brought his interview with Weelunk to another facet of how the Vineyard functions — with a deep involvement in the community.

A lot of area residents are likely aware of the Vineyard’s annual Easter egg hunt at Wheeling Park. Like the Vineyard, church home to as many as 2,000, the hunt is an epic event. Five thousand people involved, 20,000 eggs hidden.

That kind of scale of community activity is typical, Figaretti said. Other examples may be lesser known, however.

For instance, each fall — during a one-week period — a squad of the Vineyard worshippers gather to cook 80 percent of the meals that will be used at the Youth Services System Inc. freeze shelter for the homeless. The food is tucked away in the Ziegenfelder factory freezers and heated as needed over the winter.

More examples? The Vineyard also conducts football and cheer camps, mentors Madison Elementary students and installs sound systems here and there. It also donates 100 percent of fall Be The Blessing campaigns to community groups ranging from the House of the Carpenter to programs helping veterans remain in independent housing.

“I can’t even remember everything we’ve done,” Figaretti conceded when trying to list projects.

And, if all of the above sounds far removed from ministers with clerical collars, pews and hymnals, that’s exactly the point, Figaretti said. 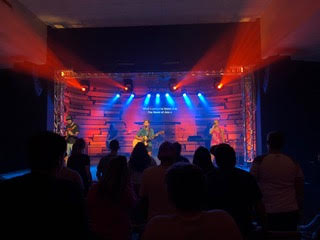 The OneEighty worship team leads middle and high school students in singing during a Wednesday night service at the church’s Warden Run Road campus. That building, which the overall congregation of as many as 2,000 has outgrown, is still used for youth programs and Bible studies and is the home base for the Vineyard’s staff of 11.

DUDE IN THE DNA

“In the 1970s, you had the Baby Boomers coming of age and a very large generation gap between the Baby Boomers and their parents,” Figaretti explained of the circumstances that launched contemporary churches such as the Vineyard. “The Boomers were just not showing up (to traditional church services).”

But, they were showing up on the beach.

In Southern California, during the height of the Jesus movement, Figaretti said some Boomers began gathering on the shore, forging a form of worship that included hand drums and guitars.

A church genre was born. Figaretti said that “come as you are” and music-centered worship remains in the Vineyard’s very DNA.

By the late 1970s, 1979 to be specific, two of the California couples felt a call to head east. They prayed, Figaretti said, and felt led to West Virginia, which they didn’t even know was its own state at the time.

Further prayer led the couples to Wheeling, where they launched the first Vineyard east of the Mississippi. Only the 14th in the nation, it is now one of about 700 Vineyards, with still more contemporary churches operating independently or through other ministries. 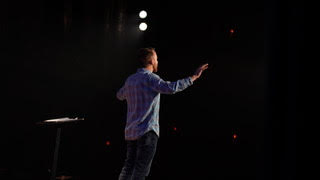 In an atmosphere of rock-concert lighting and sound, assistant pastor Myron Jellison leads Sunday services, where ministers are generally clad in jeans — or even shorts and a T-shirt.

Not to say that creating a church genre was easy.

“That was brand new in 1979,” Figaretti said of contemporary worship. “Nobody had ever seen anything like that in Wheeling, or even in the East.”

Figaretti, a Gen Xer who grew up in a mainline Protestant church, certainly hadn’t seen such a thing until going away for college. But he was hooked when he did. He made plans to combine this form of Christianity with an avid interest in the outdoors, perhaps by creating an outdoor-adventure ministry.

Upon returning to Wheeling with that plan in mind, he was instead drawn to pastoral work after he began attending the Vineyard.

With a bachelor’s and master’s degree already in hand, another difference in the contemporary Christian arena emerged. Rather than attending seminary, Figaretti immediately began training as an assistant pastor. After more than a decade in that role, he became lead pastor in 2011.

It is critical to Figaretti that the same welcome he experienced be extended to anyone who walks in the Vineyard’s doors.

“It always was a come-as-you-are culture. Many people in the sanctuary will show up in shorts and flip flops.” Indeed, Figaretti has been preaching in similar attire this summer — a deliberate decision.

“It sets people at ease who come in,” he explained. “Our target is to reach people who don’t know, who aren’t used to church. (They’re thinking,) ‘If they’re going to let that guy talk, certainly the roof’s not going to fall in if I’m here.’ There’s a lot of fear associated with church.” 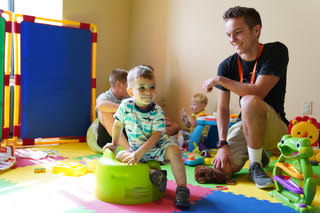 It’s not all sound and lights. Children from infancy to pre-teen have their own services in a kid-friendly environment as part of Adventure Kids. Figaretti said some congregants also meet weekly for small-group studies whose topic is a lead up to the coming Sunday’s sermon. Sunday worship may be exciting, but he considers it more of the inspiration. The small group is where he believes real spiritual transformation is more likely to take place.

He offered another church slogan: “It’s OK to not be OK. It’s just not OK to stay that way.” He said the “come as you are” culture extends to spiritual condition.

Indeed, he’s not even expecting to see significant change connected to the excitement of Sunday services. That’s “inspiration,” he explained. Spiritual “transformation” is more likely to occur in weekly, small-group sessions.

That’s the ideal, at least, but Figaretti is noticing a new trend that the ministry team is still trying to figure out how to work.

“It’s a Netflix world,” he said of people who consider the Vineyard their home church opting to do other things on Sunday morning and then watch the service online and at their convenience.

So far, it’s been hard to track what the numbers mean, he said. But, he believes online worship is a growing trend in spite of having mixed feelings about it. During the taping of Sunday services, he sometimes directly addresses the camera and encourages viewers within a half-hour drive to come down to The Capitol.

There’s plenty of room, he said, noting that attendance variations mean they could often fit all comers into one service. It’s possible, but as the church grows, he’s sticking with two, so people have options.

A massive volunteer team just drapes off back seats as needed — carefully leaving space for the disabled and those with social anxiety — so that live worshippers are actually together.

“I think there’s a universal longing for God, that he wired into us,” Figaretti said of the path forward. “People are looking, and I think why people are drawn here is: 1. It’s a community 2. You experience the presence of the Lord and 3. Our people invite people.”