She wants him to think about it. Every single day!

Don Blankenship is sitting in the Taft Correctional Institution after being sentenced in federal court to one year of incarceration for the part he played in the deadly disaster at the Upper Big Branch Mine on April 5, 2010. At 3:27 p.m., a coal dust explosion killed 29 of the 31 miners who were working in the area at the time

The Mine Safety and Health Administration investigated the mine soon after the disaster and ultimately issued 369 citations for safety violations.  Then, on April 6, six years and one day after the explosion, Blankenship was convicted in federal court of willfully violating safety standards. He was found not guilty on two counts, including securities fraud and making false statements, and he is appealing his conviction.

Ann Bybee-Finley, a native of Hurricane, W.Va., was an undergraduate student at West Virginia University at the time the Raleigh County miners perished 1,000 feet below the earth’s surface. Now 27 years old, Bybee-Finley clearly recalls the moment she and her classmates heard about the tragedy. 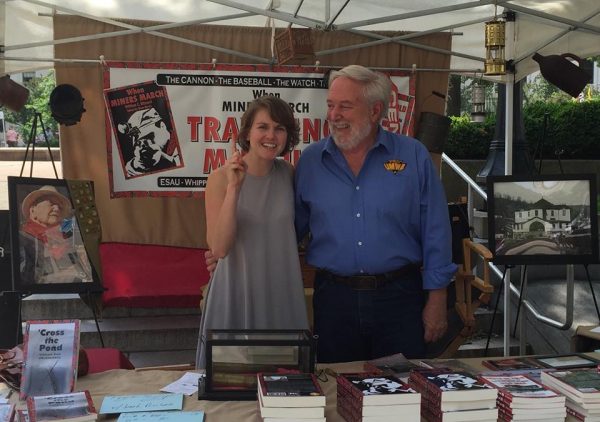 Ann Bybee-Finley met Wess Harris with the Traveling Mine Museum. Harris is expected to send Blankenship a letter in prison.

“When I was growing up, my parents read the newspaper every morning, so that was a habit I got into, too,” she explained. “I remember reading about it and thinking that it shouldn’t have happened. I was pretty upset about it because the miners killed in that tragedy were the same age I was at the time. That hit me pretty hard.

“The disaster was something the students were talking about. People were saddened and frustrated that they couldn’t do anything about it,” Bybee-Finley continued. “That’s when we all just got on with our lives.”

Following her WVU commencement, Bybee-Finley opted to leave the Mountain State to pursue her graduate degree at Cornell University in Ithaca, N.Y.

“After I finished my undergraduate degree, I knew I wanted to get out and see the rest of the world,” she said. “I knew I wanted to go to grad school, but I didn’t want to go to the same university. At that point I assumed I was closing the chapter of my life in West Virginia. 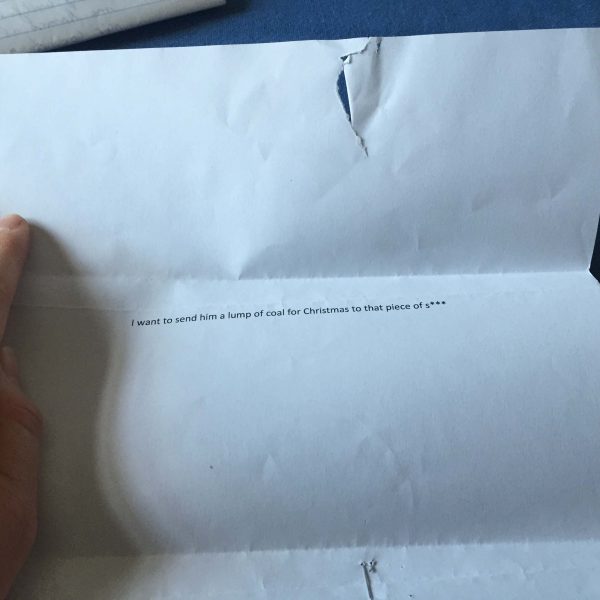 Some of the letters received thus far during the “Making One Year Count” campaign have been very brief.

“But that’s when I saw that Don Blankenship was sentenced to a year in prison for the part he played in the tragedy. I remember being very surprised that he was going to be held accountable. A CEO was held accountable. I don’t think anyone thought that was possible,” Bybee-Finley explained. “But I also realized that he was sentenced to only one year, and that seemed so small compared to the 29 lives that were lost.”

At that very moment she decided to do the one thing she knew she could do, and that was to let Blankenship know how she felt about the disaster. Bybee-Finley decided to write a stern letter to the former coal baron.

“I knew that’s what I had to do because it was the most I could possibly do,” she said. “I also thought that a lot of other people felt the same way I did and would want to write letters to him, too. That’s when I shared the letter-writing idea with my best friend and with a few other people, and they were all very supportive.

“I shared the idea with a couple of journalists, and they offered a lot of advice as far as spreading the word. They suggested that I name the campaign, start a Facebook page, and write a press release to send out to a bunch of media outlets,” Bybee-Finely continued. “So I named it the ‘Making One Year Count’ campaign, and their advice really helped me get the word out early on, and so far I’ve received 140 letters. The letters came in rapidly early on but now I may get one every two weeks.” 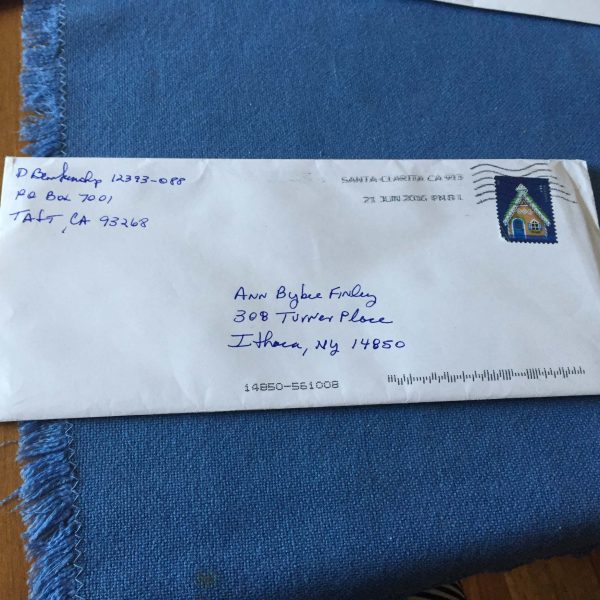 Bybee-Finley returned from vacation last month to find this letter sent from the Taft Correctional Institution in California.

The goal, she said, is to have Blankenship receive at least one letter every day during his incarceration and Bybee-Finley is hopeful she will collect more once the residents of West Virginia find out that he is definitely reading his mail.

Blankenship wrote her back.

“When I came home from vacation, in my stack of mail there was a letter from Don Blankenship,” Bybee-Finely said. “He wrote me back, and there was a return address on the envelope for the Taft Federal Correction Institution in California.

“His letter was eight pages, and it was hand-written. He was very polite in it, and I could tell that he chose his words carefully. There were a lot of things in it that he had said before,” she explained. “He insisted he was innocent, and he said that he wouldn’t have done something like what he was convicted of. He said that he believed he was being scapegoated. 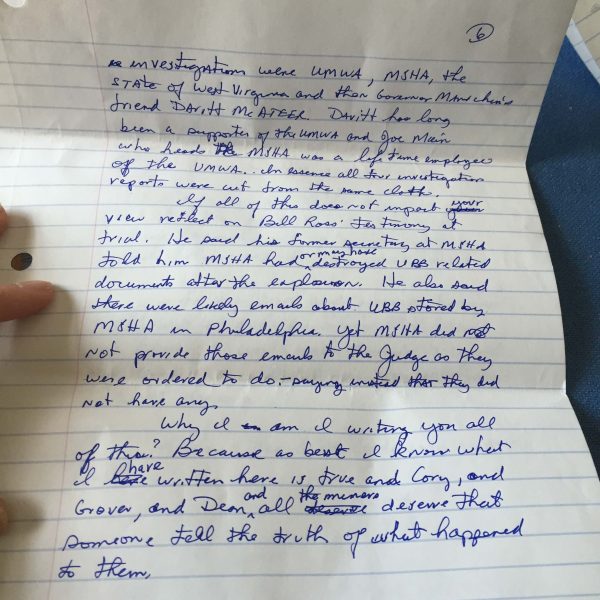 Blankenship’s letter is eight pages and is handwritten.

“He also claimed the independent investigation wasn’t really independent and that there was no real evidence against him. He also said that he wrote me back because I had included my return address with the letter I wrote to him.”

What did the convicted CEO say?

“In the letter he sent to me he did say that he didn’t want his letter to cause anyone anymore pain. I think he just wanted to tell his side of the story and that he does recognize the pain that people are still feeling,” Bybee-Finley said. “But when I look at the letter as a whole, he kind of comes across as paranoid. 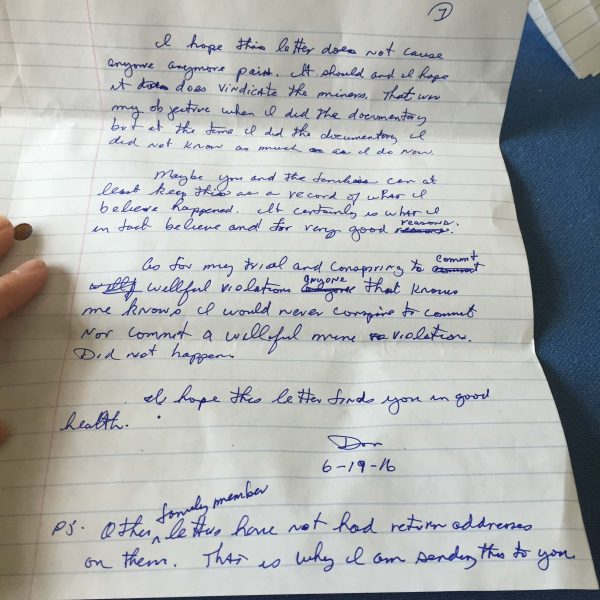 Convicted coal baron Don Blankenship wrote to Bybee-Finley that he did not wish for his letter to cause anyone anymore pain.

“I think what’s missing from the letter is a wish to make sure something like that disaster never happens again,” she continued. “That’s not something that he wrote about.”

Only a few of those letters have been dispatched to her from residents of this region of West Virginia, and Bybee-Finley understands a couple of hundreds of miles separate the Wheeling area from the Upper Big Branch Mine. That is why she plans to extend her efforts to other portions of the state by communicating with civic groups and elected officials. 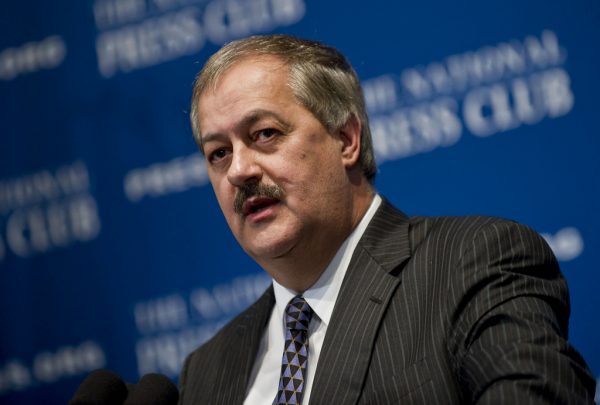 Blankenship was convicted in federal court in April, six years and one day after 29 miners were killed in a coal dust explosion at the Upper Big Branch Mine. He has filed an appeal.

Those wishing to write and send Blankenship their own letter can do so by emailing their correspondence to makingoneyearcount@gmail.com.

“Too often people feel as if they cannot be heard, but this is an opportunity for them to express how they feel about the entire situation,” Bybee-Finley said. “Now that I received his letter, I know that he’s receiving them and that he’s reading them. I have no idea if he’s writing back to everyone else, but I know he read mine.

“And that’s the point of the, ‘Making One Year Count’ campaign,” she said. “He’s in prison, and I don’t know what else he has to do. So this is a chance for the people to tell Don Blankenship how they feel about losing the lives of 29 West Virginians.”

(Photos made available by Ann Bybee-Finley)