In one hand, a craft brew. In the other, crafted food.

And one can now acquire such a two-fisted experience at the Wheeling Brewing Company at 2247 Market St. in Centre Market thanks to a new union consisting of brewpub ownership and the “Vagabond Chef,” Matt Welsch.

Welsch, who owned and operated the Vagabond Kitchen on the bottom level of the McLure Hotel for the past 19 months, plans to move his eatery to an upper Market Street location, but with that project currently on hold, he is now managing food service at Wheeling Brewing and will begin a lunch service on Monday inside the State Cellar Lunch Spot on the basement level of the First State Capitol Building on Eoff Street. 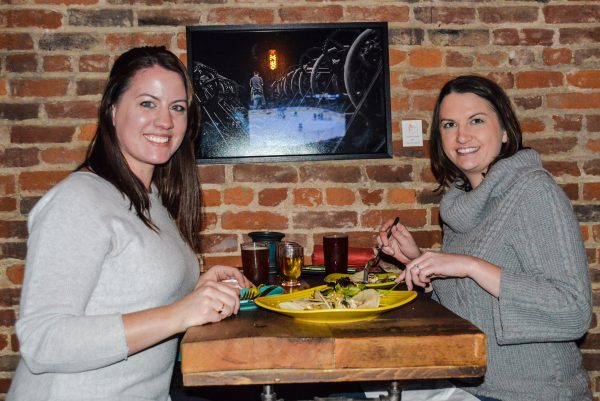 Greta Wetzel from the Washington, D.C., area visits the brewpub with long-time friend Rachael Wagner from the Woodsdale section of Wheeling.

“I am super-excited about this partnership with Wheeling Brewing, and it could not have presented itself at a better time, to be honest,” Welsch said. “We made the decision to get away from the hotel for a lot of different reasons, and although we had planned to move the kitchen to a location near Market Plaza, that has been delayed, and I’m not sure when that will now be possible.

“But I can tell you that it’s been great to be introduced to the clientele of the Wheeling Brewing Company because not only do those folks care about their beer, but they also care a lot about their food,” he said. “Our first week has been very busy, and that’s been a welcomed change for us because at the hotel we never really knew what to expect.”

Chad Hill is the CEO, Dave Cornet serves as the CFO, and the chief design officer is James Schulte; they opened the Wheeling Brewing Company in December 2014 after Hill and his wife, Angie, purchased the 130-year-old Centre Market building several months prior. The brewpub has served food from the first day, but timing proved to be perfect when they decided to make more of a commitment to quality food service.

And this past week has allowed the Hills to believe the right decision has been made. 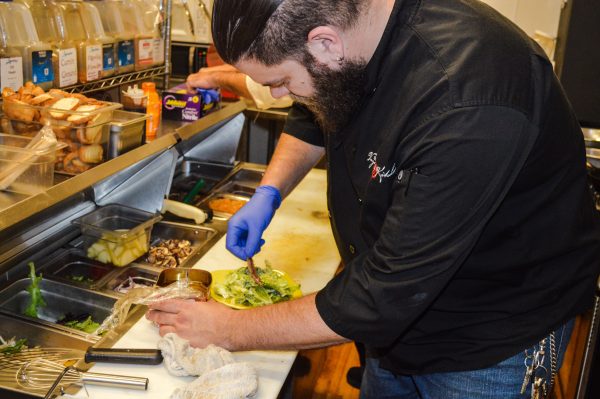 “Business has been awesome with Matt taking over the food service at the Wheeling Brewing Company. I don’t think our customers could ask for anything better, and we couldn’t ask for a better partnership,” said Hill. “In the very beginning of our business, my wife (Angie) and I discussed the idea of having Matt operate our kitchen, but at that time he was opening inside the hotel. But this was an opportunity that presented itself because of our situation and his situation, and we are very happy that it has worked out this way.

“The best part about the partnership is that we all share the same common goal as far as the partnership is concerned, and we also share the same vision for our city’s future. The primary goal is to bring handcrafted beers and handcrafted food to the people of Wheeling and of the Upper Ohio Valley, and now you can get both in the same place,” he continued. “It started with us with the craft brews, and that was really our intent in the very beginning as far as the business is concerned, but because of the way licensing works in the state of West Virginia, we needed the food component. So then our goal was to have the right kinds of food that would complement our craft beers, and now, with this partnership with Matt, it’s all really fallen into place.”

Welsch initially opened in the McLure Hotel in June 2014, and he and his staff attempted to have breakfast, lunch, and dinner six days per week as well as a Sunday brunch. Over the 19-month span, however, he ceased breakfast except on Sundays, and operated on a limited lunch and dinner schedule for various reasons. 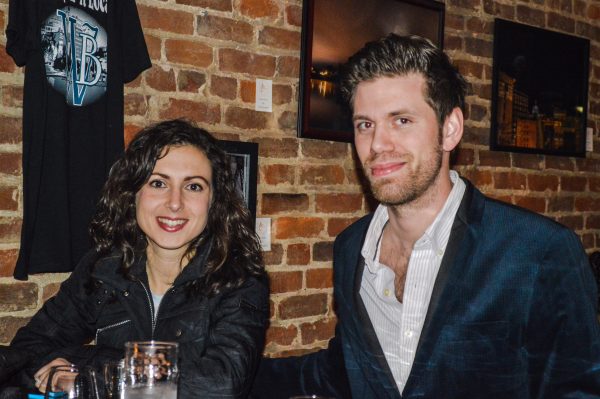 The Hills – Angie and Chad

“I am really thrilled be out of the McLure because we experienced a lot of issues there during our time using that space,” Welsch said. “Not only do I no longer have to worry about the condition of the place and the mysterious puddles of water that would form in the kitchen, but presenting a nice atmosphere in the dining room was very, very difficult.

“We did everything we could about the atmosphere with bringing in a lot of local artists to hang their work throughout, but the response I’ve received about getting out of there has been a little overwhelming,” he said. “It was a great stepping stone, but it was a daily struggle to make it work because while everyone loved the food, it just wasn’t a place where people wanted to go because the hotel just isn’t what it used to be.”

Welsch’s food-preparation schedule doubles on Monday with the opening of the State Cellar Lunch Spot, and he is hoping downtown employees with take advantage of a great menu and speedy service. The menu will include a chef salad, soups, a daily chili, wraps, sandwiches, and a “What’s in the Crock” daily special. Mexican sodas, chocolate chip cookies, and potato chips also will be available. 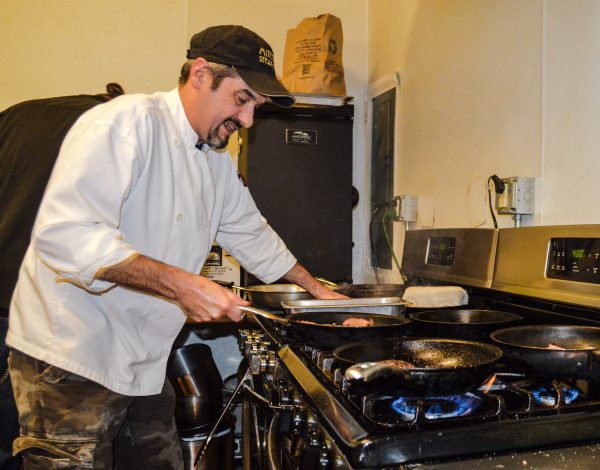 “The staff and I will be at the State Cellar from 11a.m.-2 p.m. for lunch so people can come in and grab what they want and take it with them, or they can have a seat at one of the tables,” Welsch explained. “We will not have table service, but instead everything will be served in the to-go boxes that we used at the Vagabond Kitchen. So it’s up to them.

“Our goal at the State Cellar will be to get the people what they want for lunch as quickly as possible because most of our customers will only have a short time for their lunch,” he said. “In and out. That’s the goal.”

The “Vagabond Chef” will be in the Wheeling Brewing Company’s kitchen each evening except for Sunday. The brewpub is open Monday through Thursday from 4-10 p.m., on Fridays from 4 p.m. – 12 a.m., and on Saturdays from Noon until Midnight. Kitchen hours end one-hour earlier during the week and two hours earlier on Friday and Saturday evenings.

The first year of business, Hill admitted, has been successful yet challenging, but he has hinted that the establishment’s in-place plans for this new year should attract a little attention from not only craft beer and food enthusiasts, but also from lovers of live music, fine liquors and wines, and local and regional artists. 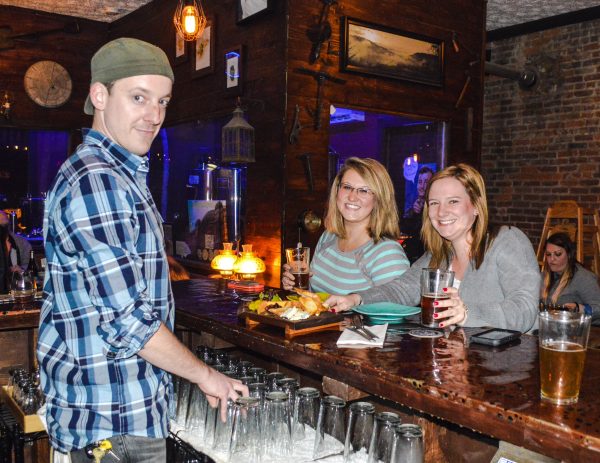 Barkeep Brendan Cuff and customers Abbey Bennett
and Caroline McCabe, both of whom are residents of Martins Ferry, Ohio

Wheeling Brewing currently offers its Nail City Porter, McColloch’s Wheat, Moon Dog IPA, Panhandle Ale, and Old Reymann’s Ale, and it also features special brews like the Weelunk IPA and, “The Swan.” Ownership also operates a few “guest taps” from which other handcrafted beers are served, and the beverage menu includes a variety of wines and bottled and canned craft brews.

“It’s been a great experience because we’ve been blessed to be extremely busy, but now we are bringing together Wheeling Brewing Company and the Vagabond Kitchen to offer an awesome product at the pub,” Hill said. “With that partnership, plus our planned expansion to the second floor, we believe 2016 is going to a very awesome year.

“In the future we will have different specials during the weekend, and we will have a few featured entrees on the weekends,” he said. “The menu is, right now, a work in progress, but I know Matt is planning to work with some of the staple dishes that are already established at the Wheeling Brewing Company. From there, we are looking forward to him bringing some of his favorite selections from the Vagabond Kitchen. We want him to have the opportunity to display his craftsmanship in the kitchen.”

That expansion involves the second floor and the installations of a separate entrance, a fire escape, ADA complaint restrooms, a “dumb waiter” pulley system, a second specialty bar, and possibly a deck.

“We’ve made a lot of progress on the second floor the last few months, and that’s mainly thanks to my dad. He’s performed most of the work with the walls and the painting and everything else that has been accomplished to this point,” Hill said. “At this time we are hoping to have the second floor ready to open by mid- to late-spring and we see the first floor being more of a gastro pub with a big concentration on the brewing of our craft beers with awesome food from the Vagabond Chef. 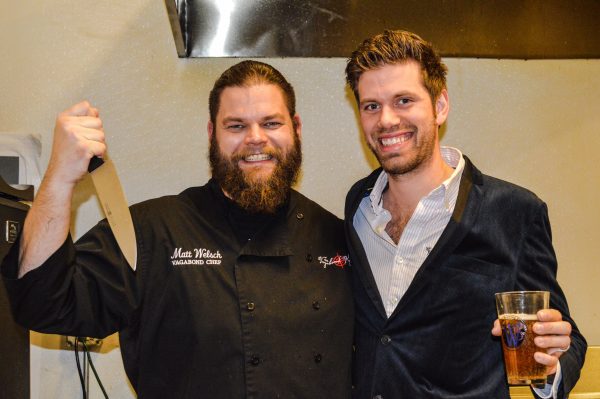 “On the second floor we envision Matt having an opportunity to shine with entrees and restaurant-style seating and a chance for us to offer local residents something they’ve never had before, and that is a whiskey-rye bar,” he revealed. “And next year we are looking forward to forming new partnerships in the areas of live music and a few others that will bring even more things to Wheeling, “We eventually would also like to get into the wholesale-distribution business with our craft beers.

“And as far as Matt and the Vagabond Kitchen, it’s our hope that it becomes a permanent partnership because we have both made great names for ourselves over the past year and because it’s a partnership that I believe can benefit both of our businesses,” he continued. “I also believe that keeping the brewing company and the Vagabond Kitchen will work out well for us and for the people of this area.”