We are absolutely elated to officially “let the cat out of the bag” that WTRF will be airing the first-ever Weelunk Show this Sunday at 11a.m. on Comcast Channel 3 (My Ohio Valley – 803 Digital).

This has been a total labor of love for so many people, and working through the process has been such a positive experience that we felt as if a behind-the-scenes look was in order.

First and foremost, let us share the background of how we got here.

I am a Wheeling-born girl who moved from the area when I was 6. Since I’ve always had family in the Valley, there were many back-and-forth trips for holidays and regular visits. The history and culture of the area have been a fascination for me thanks to my dad, so prior to moving back, I discovered sites like Weelunk, the Memories of Wheeling Facebook page, and Archiving Wheeling.

Those websites gave me a whole new insight into the area. This summer I took the plunge and relocated back to the area to accept a job with WTRF. Immediately, I started looking for opportunities to expand local content and really focus on what makes Wheeling great. I’ve always loved Weelunk and liked the idea of being able to further flush out stories with videos that explored the sights and sounds of its content. 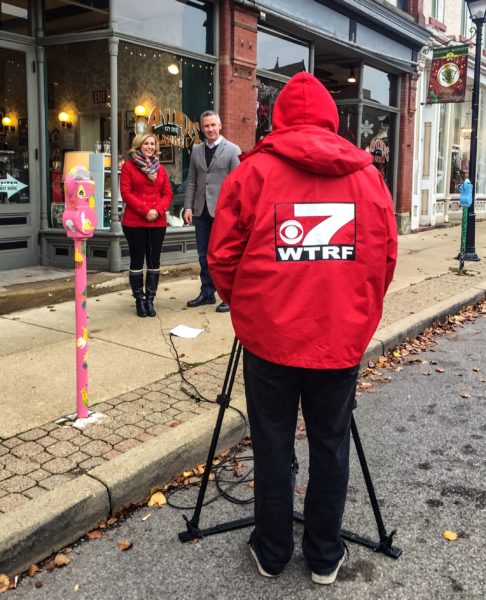 WTRF-TV’s Rachael Dierkes and Wheeling Mayor Glenn Elliott serve as the co-hosts for the first show.

It was in early 2014, when I was approached about my ideas for a new outlet here in Wheeling that would offer breaking news, feature stories, and people profiles along with information on current events and stories on the lifestyle in the Wheeling, and a few months later Weelunk was launched on Nov. 1 of that year thanks to the founders and community folks who decided to support the effort.

Over the past two years Weelunk has attracted readers form all 50 states and more than 60 countries while collecting more than 1.5 million page visits, and more than 250 individuals have contributed editorial content. Weelunk’s success has attracted attention from around the state of West Virginia and similar websites have since launched in Elkins, Martinsburg, Huntington, Morgantown, and Charleston.

And now we have partnered with WTRF-My Ohio Valley for the Weelunk Show.

WTRF’s General Sales Manager Lauren Hersey and General Manager Roger Lyons helped to develop the idea, and our next step was a phone call to Weelunk. Low and behold when I reached out to Jason Koegler, co-founder of the site, the great minds at Weelunk had a similar dream, so we were off.

It was now time to bring in the big gun, and that came in the form of Steve Novotney. Between the two of us and our Production Specialist Jim Taggart, we had four weeks to turn this from a dream into scheduled programming. 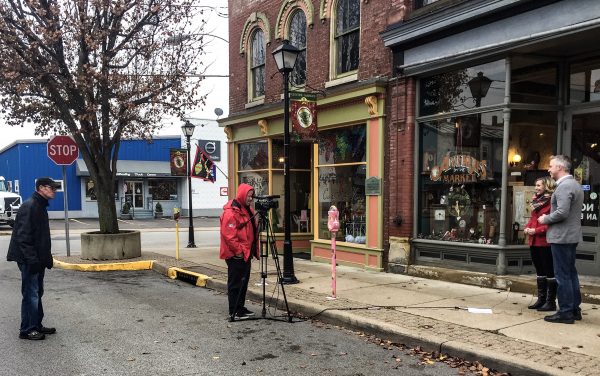 The show’s introduction and closing were filmed in front of Antiques on the Market at Centre Market.

From our first meeting, it was clear that Steve was passionate about this project. He loves this city and its residents and was willing to do anything to get the piece done and get it done right. We picked three stories from his holiday archives and set off to film interviews, and the response from participants was astounding. Not only were people willing to participate by sharing their stories, but they were also willing to help procure photos, filming space, and music.

I think Roger Hoard said it best when he said, “For you, Steve, anything.” (Roger was kind enough to provide the fantastic instrumental music for the piece). Even Wheeling’s own Mayor Glenn Elliott was willing to take a turn in front of the camera to co-host with Rachael Dierkes.

When Steve and I first met to talk about details, we were oh-so-optimistic about how this process would go. At first, the process was a breeze. The interviews were fascinating and moved along rapidly, but little did we realize that with the exception of the Festival of Lights, we chose to cover two additional pieces of Wheeling history that were not documented with photographs.

We were able to come up with a few photos of Santa at Cooey-Bentz, but when it came to the original Talking Tree at L.S. Good Co., as many of you well know, we were totally out of luck.

But, being the hard-headed individuals that Steve and I are, we knew that we had to figure out another way. There were many a late-night photo shoots, and we even tried our hand at shooting backup video footage. On one particularly cold morning, Steve took the plunge and contorted his body into the base of the Talking Tree to get a shot of the interior. 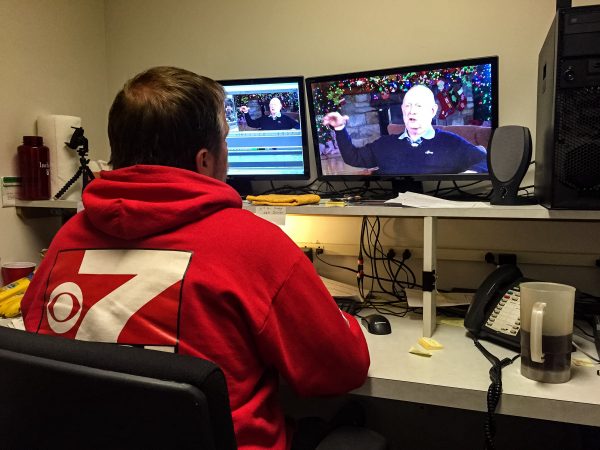 WTRF-TV’s Jim Taggart filled the roles of cinematographer and editor for The Weelunk Show.

We spent hours poring over photos and working through the editing process with Jim, and you truly cannot imagine how many photos are required for interview transitions. It’s even more challenging when half of the transitions revolve around a magical tree that, as we’ve already established, no one has historical photos of from the 1970s and ’80s.

Despite the many challenges, we worked through them as a team and came out with a product that I am extremely proud of.

I was fascinated by the Talking Christmas Tree, and I sat on Santa’s lap at Cooey-Bentz without having an idea that the man behind the beard was my wife’s grandfather. He knew my name, and so did that animated tree in the front window along Market Street, and those moments were magical.

Those who watch the Weelunk Show on WTRF – My Ohio Valley will have the chance to hear a lot of the untold stories about Toyland at Cooey Bentz, the Talking Christmas Tree, and also Oglebay’s Festival of Lights, an annual event that was founded in 1985, the same year I graduated from The Linsly School. It was small at first, and then it grew, and today it continues to attract large crowds to Wilson Lodge and to many Wheeling-based businesses.

Creating a TV show is far different from programming and hosting a three-hour talk radio show and writing what I do for Weelunk.com, but thanks to Diana, Jim, and the many great folks at WTRF-TV the experience has been educational and rewarding beyond belief, and I am looking forward to working even harder to continue bringing the program to the viewers of the Upper Ohio Valley. 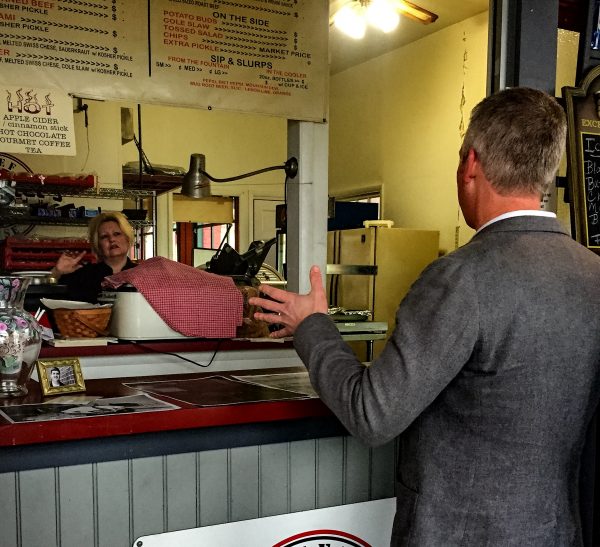 Mayor Elliott had the opportunity to catch up with the owner of Michael’s Beef House, Kim Pappas.

I learned so much about the people behind-the-scenes of our favorite holiday traditions. Because Erics Janelsins went above-and-beyond while digging out original photos from the construction of the Festival’s displays, I was able to see John Hargleroad working in the field welding displays.

I learned how Kurt Zende works to constantly reinvent Christmas at Centre Market to make sure there is always something for families to enjoy.

I also never knew that the ladies who voiced the Talking Christmas Tree literally had to be a certain size in order to be able to physically stay in the base of the tree for a full eight-hour shift.

There are so many incredible people that work tirelessly year-round to make the holidays in Wheeling something special for everyone to enjoy, and it is staggering how many stories are out there that still remain untold.

Weelunk has offered the tales of these three stories, and on the Bethlehem Star, the annual parade, the natives who flow home at this time of year, the toys most popular with Valley kids through the years, and all the special events that crowd the calendar every December.

But, yes, there’s much more to tell, and that’s the plan for the Weelunk Show.