West Liberty University’s Dr. Zachary J. Loughman was named the 2014 Professor of the Year in West Virginia by the Faculty Merit Foundation on Tuesday, March 17. The Foundation presented the award to Dr. Loughman during a banquet held in the Great Hall of the Culture Center in Charleston on Tuesday evening.  Loughman is the first WLU professor ever to receive the award.

“Dr. Zachary Loughman is the epitome of excellence in higher education. He gives willingly of his time to foster and encourage the passion of students at all levels of education,” said Dr. Robert Kreisberg, dean of WLU’s College of Sciences. Loughman is assistant professor of biology at WLU and has taught at West Liberty for eight years, receiving the University’s Professor of the Year Award in 2011 and 2013.

Professor Loughman’s research focuses on the natural history, taxonomy, and conservation of North American crayfishes. He has named three species of crayfish, including Cambarus hayfield, which is found in West Virginia’s Tug River basin. 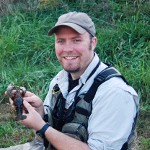 His laboratory, the only one in the United States focused solely on astacology (crayfish biology), conducted a five-year survey of West Virginia crayfish where over 2,100 streams in all 55 counties were sampled for crayfish. Data from the project resulted in the West Virginia Crayfish Atlas, which is used by the state Department of Natural Resources to plan the future of crayfish conservation in the Mountain State. Loughman’s research will also be published in 2019 as Crayfishes of the Central Appalachians by West Virginia University Press.

“The ultimate goal of my research is to ensure that Central Appalachia’s crayfish receive attention by conservation agencies,” Professor Loughman said.

Former student Raquel A. Fagundo, who is now completing her master’s degree at Appalachian State University in Boone, N.C., wrote: “There are not enough words to describe how much Dr. Loughman has benefited my life and so many others. Dr. Loughman mentored me . . . to present my research at national conferences, make connections in my field, and even publish as an undergraduate. I truly hope that West Virginia can appreciate what this professor has to offer.”

Loughman is a resident of Wheeling, and he and his wife, WLU alumna Kathy Vopal Loughman, have a son, Colin.
Dr. Lisa Di Bartolomeo, director of the Slavic and Eastern European Studies program at West Virginia University, was first runner-up. Powsiri Klinkhachorn, Ph.D., computer science and electrical engineering professor at West Virginia University; William Palmer, Ph.D., professor of history at Marshall University; and Harald Menz, Ph.D., world languages and cultures professor at Bethany College, also received prizes as finalists for the award. Since 1984, the Faculty Merit Foundation of West Virginia has honored an outstanding faculty member at a West Virginia college or university. The award winner receives a $10,000 cash prize, with smaller awards to the other finalists. The Professor of the Year award is presented with financial support from United Bank.