The catfish were hugely scary when hooked near one of the pier supports of Wheeling’s Wharf Parking Garage, and that was likely because the bottom feeders grew accustomed to consuming the small fish, algae, and crawfish that collected on or near the riverfront structure.

That was in the 1970s, when the Wharf Garage was in its second decade of existence as the answer to the lack of parking in downtown Wheeling. The Wharf, constructed in 1958 for $1 million, contained 884 parking spaces on four levels.

On the Fourth of July each year there was a literal race to the top level for the best view of the city’s fireworks, and if some were too late to acquire such a spot, they battled for the spaces along the western edges of the Wharf Garage.

“There was always a huge crowd at the Wharf Garage on the Fourth for the fireworks and also for the symphony performances we had at the time,” recalled Wayne Barte, Wheeling’s city manager from 1979 until 1985. “It was one of the best places to be, and the Suspension Bridge was a great place, too, and there were people all over the east shore of Wheeling Island.

“What the city does now reminds me of how it was when I was the city manager, but now the Wharf Garage isn’t in the way, and I think even more people are at Heritage Port,” he said. “I don’t think they arrive as early as they used to, but that’s only because the best spots in the Wharf were taken pretty early in the day, and that’s far from an issue at Heritage Port.” 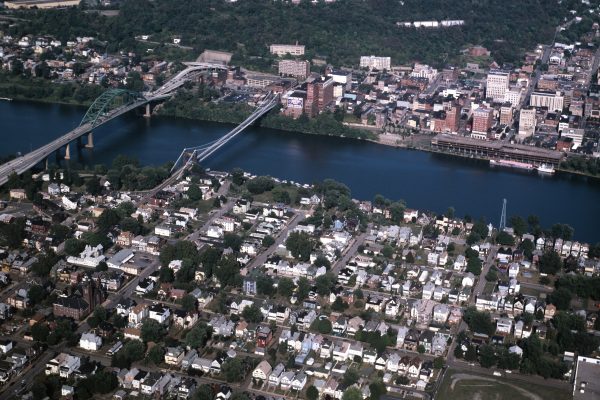 The Valley Voyager and Lou’s Landing were tied to the Wheeling Wharf Garage when this aerial photo was snapped.

The city of Wheeling’s waterfront had long been known as, “The Wharf” because it had served as a public landing for large and small watercraft since at least the early 1800s, according to records archived by the Ohio County Public Library. However, with the growth of the city’s downtown district and the popularity of automobiles, parking became an issue.

The population of the Friendly City was close to 55,000 residents, and downtown Wheeling was THE metropolitan area for folks living throughout the Upper Ohio Valley. One former businessman was Tom Dawson, a butcher who began his meat-cutting career at Cook’s Department Store in Benwood. But Dawson, now retired and working part-time at Miklas Meat Market a couple of days each week, saw an opportunity on 12th Street near the Thom McAn shoe shop.

“And through the years we were open there, I learned the times of day when to have the shop fully staffed, and the busiest time was when the people working inside the Wheeling-Pitt building were heading home,” Dawson recalled. “The men would talk to their wives near the end of the day, and they would come in and get what they were having for dinner that evening.

“We did a great business at lunch time, too, because there so many people working near the corner of 12th and Market back then. There were a lot of shoppers, too, who would ride the buses into town because that’s really where everything was,” he continued. “We had everything the customers wanted, and if we didn’t have something, I would make sure to get it in stock for the next time they came in. That’s how we made sure they would come back in.”

Dawson remained open while the Friendly City’s downtown realized more business closures than openings, and the population of the municipality was in decline. The butcher shop finally closed its doors for the final time in 2012, but the staff was down to two after losing that post-work foot traffic in the late 1990s. 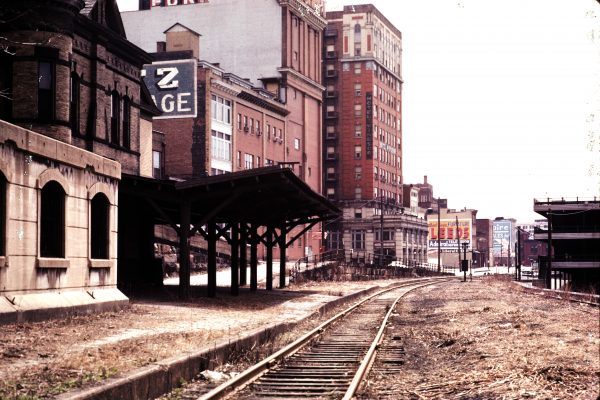 This is how the city of Wheeling’s downtown riverfront area appeared as recently as the 1970s.

“Our location was really, really a good one because of the Wharf Garage because most of the people working in that area of downtown would park there because it was the closest place,” Dawson said. “There weren’t so many parking lots in town back then, but we were still open when some of the buildings started to come down.

“I can tell you, though, that when they took down the Wharf, I lost 30 percent of my business,” he reported. “As soon as they closed it, we saw a big drop in business because they had some of the parking garages up, and they weren’t near us. We did OK, and we stayed open for a while, but we didn’t need to employ any part-timers anymore.”

But riverfront development was the rage across the United States, and Harry Hamm recognized it after the trend was identified in Pittsburgh. Hamm, a professional ballplayer, firefighter, and veteran of the U.S. Army during World War II, was a Wheeling journalist and longtime editor for the Wheeling newspapers. He has been rightfully inducted into the Wheeling Hall of Fame because he made imaginations dream during the 1980s with his Wheeling 2000 Plan.

“And that plan included that we wanted to open up the waterfront so that it would be an event-type place,” Barte said. “That’s why the administration I worked for at the time made the decision to demolish it. And that decision was made after lots and lots of thought about it because there was no chance for any real riverfront development to take place with the Wharf Garage in the way. Not in that area, anyway,

“The thought was that we would create a demand for parking by doing it because we already had the other garages in the downtown, and those garages were part of the reason why the numbers at the Wharf went down the way they did,” he said. “It’s true that it didn’t come down until 1998, but that was a big decision, and the movement in that direction started when I was with the city.” 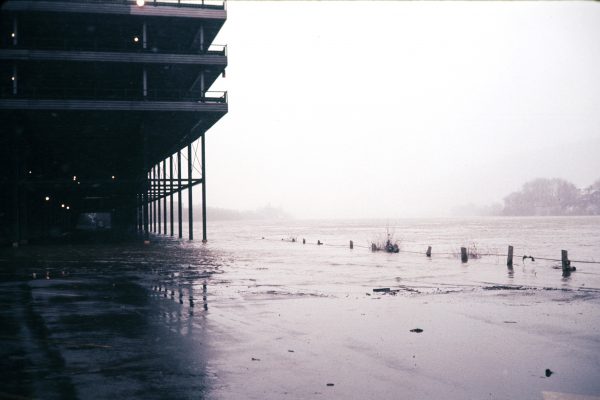 The bottom levels of the Wharf were closed to motorists when the Ohio River flowed over her banks.

Wheeling’s Wharf Garage was never in danger of failing, Barte insisted, but it was deemed a relic after two decades, and it was a steel and concrete structure standing in the Ohio River.

“When I was the city manager, we could see the effects of a steel structure resting in a pretty big body of constantly moving water, and that’s also why the structure needed to be painted so often, and that was not a cheap project,” Barte said. “The floors had to be sealed, and the rust had to be addressed, but it reached the point that it just didn’t look good from the front or from the river.

“The Wharf Garage was the big thing at the beginning and for a lot of years after it was opened, but when I was the city manager, it was in a precipitous decline in its usage,” Barte recalled. “We all know there was a big decline in the number of businesses in the downtown, and I don’t mean the retail operations but also the companies that filled the biggest buildings. If that conversation didn’t start in the 1980s, who knows, it might still be sitting there today, but to us at the time it was a very sturdy structure, but it was in the way.”

Wil Turani, currently the manager of Orrick’s Global Operations Center, was hired as Wheeling’s assistant manager under Jim Curnes in 1993, and the Wharf Garage remained in place. Soon after taking a seat behind his desk, he was informed of the ongoing effort to raze the garage in favor of a park. 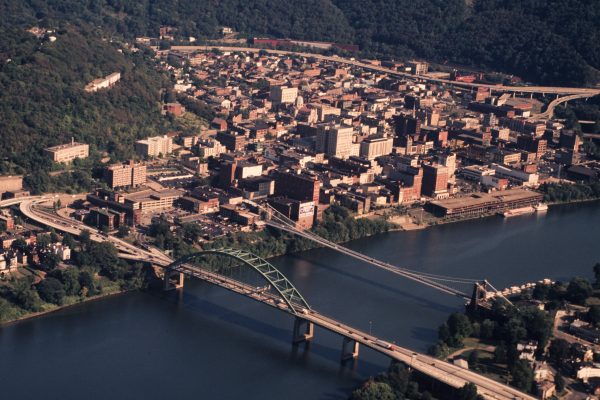 Fewer people were using the Wharf Garage when the demolition conversation was initiated in the 1970s.

The proposal, though, was met with resident resistance.

“Oh yeah, that conversation was still continuing, but no one in the city wanted anything to do with that parking garage coming down,” he recalled. “The people who parked there didn’t want to walk any further to their business, and the vision we tried to give people involving a new waterfront didn’t seem to matter.

Turani was promoted to city manager in 1997 and, with Jack Lipphardt serving as the city’s mayor, he finally pulled the trigger in early 1998 because he was aware of the construction project involving the Robert C. Byrd Intermodal Transportation Center on the corner of 14th and Main streets.

Council approved the hiring of the West Virginia Company Inc. to erase the 40-year-old garage, and the firm was owned by Wheeling resident Frank Calabrese. His approach to the demolition, however, was far different from that of other contractors with which the city was conversing. 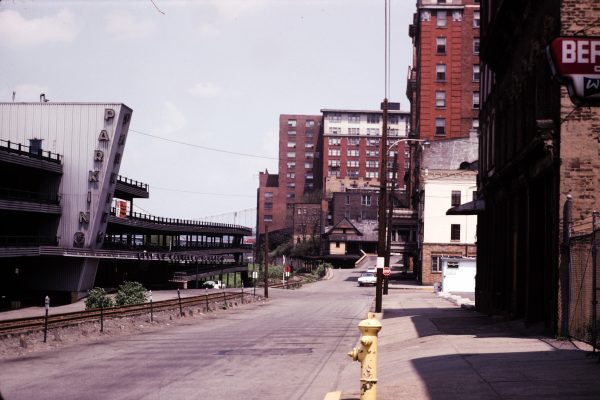 The garage was made of steel, tin, and concrete and contained 884 parking spaces.

“There was another consultant from Boston, and he told the city that they needed $120,000 before they even think about demolishing the structure, but I didn’t think the guy knew what he was talking about,” Calabrese explained. “That was because the building had a positive net worth and because I was willing to buy the garage off the city because of all of the steel, and I ended up paying them $11,000.

“At the time, Wheeling-Pittsburgh Steel was still in downtown Wheeling, and I would sell them the steel that I salvaged from a lot of jobs I did. With the Wharf, I would remove the tin and sell that to Strauss, and I would cut the steel into pieces and sell them to Wheeling-Pitt,” Calabrese recalled. “After we took the building down, the men with Savage Construction came in and took the concrete and the foundations away from the site.”

“I was on TV every night because so many people were paying a lot of attention to the project. There was always a crowd, too, especially at lunch time,” he said. “It was a big deal because the Wharf Garage was a part of people’s lives and because it had been there for so long. 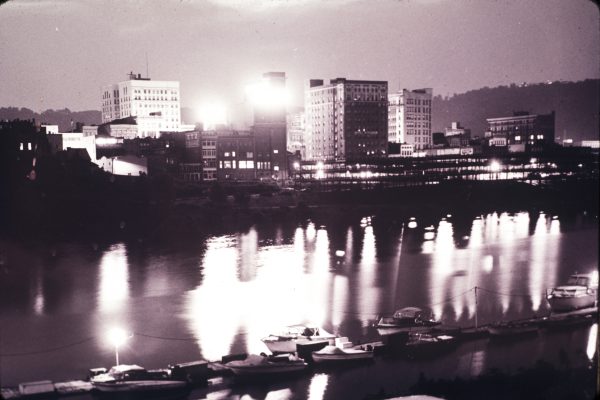 The Wharf Garage blocked the riverfront for those in the downtown District.

“But the new trend was waterfront development, and the city was working with the National Park Service for a new park. A lot of people spoke out against the demolition, but the city moved forward anyway,” Calabrese continued. “It was an easy job because of the equipment I was using at the time, and it was a skeleton of a building, but when we were finished with the demolition, I think the people realized that we had a beautiful river flowing right by our downtown.”

Heritage Port was officially opened on Aug. 15, 2001, and a flagpole near the main entrance to the sculpted amphitheatre was dedicated to the memory of Hamm. Since then the facility has hosted a bevy of festivals, political rallies, free events, and multi-day concerts such as the Heritage Music BluesFest each August. The riverfront green space also is popular with wedding parties, prom-going high schoolers, and for senior pictures, and the American Queen luxury riverboat has docked there a number of times.

Turani believes today the successful programming for Heritage Port has squelched the critics and made most into believers. 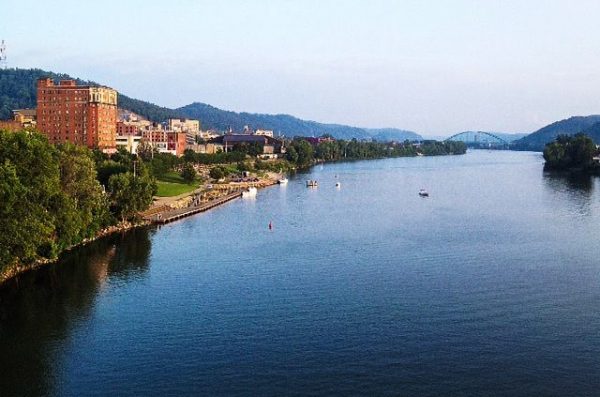 Heritage Port was constructed with federal funds and opened on Aug. 15, 2001. (Photo by Steve Novotney)

“That project was about changing the face of Wheeling, and even though it was about taking down a garage and creating a waterfront, it was a very big deal. It was very significant to a lot of people,” the former city manager said. “But what is there now helps define our downtown and the use of it has been excellent. If you ask anyone involved with that original decision, I’m willing to bet Heritage Port has exceeded their expectations.

“Change hurts. We all know that, and that’s why it was understandable at the time,” Turani said. “But Heritage Port has proven its value with everything that it brings to the city of Wheeling, so I believe people appreciate it and respect it now.”