The Head of School at Wheeling Country Day has been awarded a fully funded fellowship to the Klingenstein Center for Independent School Leadership’s 2015 Heads of Schools Program.

Elizabeth Hofreuter-Landini, now in her sixth year at Wheeling Country Day, will now participate in a two-week workshop on the campus of Columbia University in late January. While she’s there, she will have the opportunity to visit with other heads of schools from around the world, according to the Klingenstein Center. The goal, Hofreuter-Landini explained, is to examine educational issues and policies facing independent school educators.

“I am very passionate about teaching, and about learning myself, and this fellowship will give me the opportunity to do just that for a two-week period,” the 1985 Mount de Chantal Academy graduate said. “One of the rules is that no one is allowed to call you while you are there. It’s all about the research, and I look forward to that very much.

“Each participant gets to select what it is they would like to research, and I have selected parent education as my area,” she continued. “Education is changing, and my goal is to get the parents involved so their children can continue that process even after classes are over.”

Participants will focus on philosophy, research, technology and governance, according the press release distributed by the Klingenstein Center. The 2015 cohort includes school heads from all areas of the United States in addition to participants from Australia, Cayman Islands, Ethiopia, Kenya, and Singapore.

Hofreuter-Landini, who taught and coached at The Linsly School for 18 years before becoming Wheeling Country Day’s Head of School, believes the mindset of both parents and students a most important part of education.

“For a long time we have used the fixed mindset that involved problem solving, but the growth mindset allows the students to find the problem first and then work on solving that problem,” she said. “The students get it because that’s how they are taught, but that’s not how today’s parents were taught.

“What I love the most about the Klingenstein Center Fellowship is the opportunity to do this kind of research,” Hofreuter-Landini continued. “The best thing any teacher can do, in my opinion, is to go find out what we don’t know yet about educating today’s students.”

According to the Klingenstein Center, the Heads of Schools Program attracts and selects educators who have demonstrated outstanding accomplishment or potential for excellence and equips them with the knowledge, skills, and values necessary for informed and effective practice.  The program was founded in 1991, and it involves working with 19 other school heads. The award provides independent school leaders with an opportunity for focused professional enrichment, renewal, and reflection.

The Klingenstein Center, the press release stated, is “dedicated to improving the quality of independent school education by developing and strengthening leadership among teachers and administrators who work in independent and international schools in the United States and throughout the world. All fellowships and graduate programs focus on instructional leadership, collaboration and teamwork, ethical decision-making, reflective practice, and a commitment to social justice and diversity.”

Drawing upon a record of success that spans more than 35 years and the full resources of its Teachers College and the other graduate schools of Columbia University, the Klingenstein Center stands alone in its capacity to develop leaders for independent schools.

“I am very much looking forward to these two weeks, not only because of the research I’ll have the chance to conduct, but also because I will be a part of the research the other heads will be doing,” said Hofreuter-Landini. “It’s an honor, and it’s an opportunity for me to help make Wheeling Country Day School the best it can possibly be.” 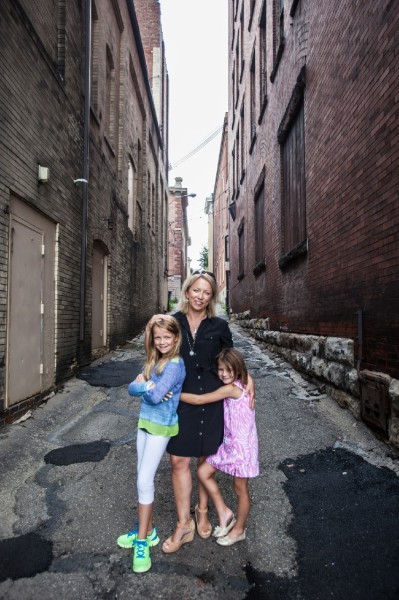 Elizabeth Hofreuter-Landini with her daughters Grace and Ella. Photo by Bennett McKinley.