Former director of Reinvent Wheeling is familiar with organization, its goals

The board of directors of Wheeling Heritage today announced it has hired Jake Dougherty, the director of its Reinvent Wheeling arm, to be the organization’s executive director. Dougherty, who has been working with interim director and board member Jeanne Finstein, Ed.D, for the past six months, will assume the post immediately.

The board’s executive committee recommended Dougherty after an extensive search process that included applicants from around the country. The Wheeling National Heritage Area Corporation and Reinvent Wheeling merged in April, creating Wheeling Heritage.

“Jake is poised, bright, and hardworking, with a clear vision for Wheeling Heritage,” said board chairman Arch Riley Jr. “Under his leadership, Reinvent Wheeling formalized its structure and increased its capacity by becoming a 501(c)(3) nonprofit organization with a board of directors, and was designated as a Main Street program by the National Main Street Center.

“Jake is all about community engagement – he knows how to build relationships and identify resources for Wheeling’s continued renewal,” Riley said. “He will work very well with the new mayor and City Council to further preservation and community development.”

Dougherty, 26, a Wheeling native and 2008 graduate of The Linsly School, earned a bachelor of arts degree in public communication and political science from American University in Washington, D.C. He interned with Wheeling Heritage for two summers and returned to head Reinvent Wheeling in October 2014. He had been communications manager for Taste of D.C. LLC in 2012-13 and then a member of AmeriCorps.

“This moment marks a special time in Wheeling’s history. Residents of Wheeling are believing that the future will be better than the past for the first time in decades,” Dougherty said. “There is no organization that has played a more important role in Wheeling’s revitalization than Wheeling Heritage, having helped to develop some of the city’s most important places over the past 20 years. It did not do it alone. It was thoughtful and inclusive. It was focused and deliberate.”

Riley said Dougherty “knows what needs to be done to forge a strong future for Wheeling Heritage” and is familiar with the organization’s objectives and opportunities. Dougherty has worked to create a positive narrative about Wheeling, he said, and partnered with local, regional and state organizations to prioritize projects for Wheeling. 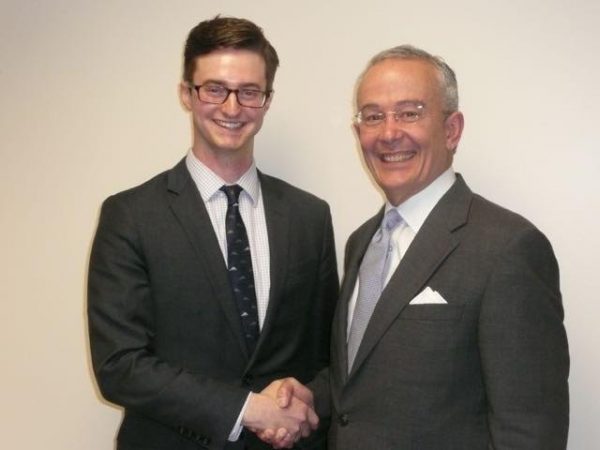 “We’ve witnessed Jake’s work to create platforms to grow and promote small businesses, such as the Show of Hands micro-grant program that has contributed more than $18,000 to support community projects, and the monthly Small Business Workshops with West Liberty University’s Center for Entrepreneurship,” Riley said. “Jake continues to address problems with vacant buildings. And his strategies for beautifying Downtown with public art led to a Governor’s Innovation Award.”

Finstein cited Dougherty’s ability to engage others in projects and said he has cultivated relationships with leaders in Wheeling, Charleston and Washington with the aim of attracting resources.

“We know that incoming council members care about the city’s history and speak positively about projects we’ve led,” Finstein said. “This is an optimal time to establish a solid working relationship with the City of Wheeling, philanthropic foundations, corporations and individuals who care about preserving and restoring our historic assets.”

Dougherty is a member of the boards of Augusta Levy Learning Center, OV Connect, Generation WV, Preservation Alliance of WV, and Wheeling Young Preservationists, and is a member of the state’s Abandoned Properties Coalition. One of the challenges Wheeling Heritage faces is limited federal funding, he said, underscoring the importance of collaborating with community members, philanthropic foundations and entities such as the Regional Economic Development Partnership.

“A revitalization effort should listen to the community, prioritize its needs, and then bring resources and people to the table to undertake the project,” Dougherty said. “Wheeling Heritage, the City of Wheeling, the Ohio County Commission, the Regional Economic Development Partnership, and the Wheeling Area Chamber of Commerce are natural partners in this process. I’d like Wheeling Heritage to further focus, define and plan our work in order to be a strong link in the chain.”

Wheeling Heritage was founded as Wheeling National Heritage Area Corporation in 1994 to conserve, interpret and promote the city’s heritage. The organization, housed in the Artisan Center, invested $6 million in the Wheeling Heritage Port and the Robert C. Byrd Intermodal Transportation Center. It has granted over $450,000 to local organizations and worked with the city to establish a façade loan program. It invested in the Capitol Theatre, the Wheeling Stamping Building (which now houses Orrick), the Walter Reuther, Augustus Pollack and Madonna of the Trail monuments, and is restoring Mt. Wood Cemetery.