And Wheeling Heritage is bringing Wheeling’s brewing history to life with “Henry: The Life and Legacy of Wheeling’s Most Notorious Brewer,” a new podcast by Wheeling Heritage Media. The podcast examines Schmulbach, a German brewer in Wheeling, whose life touched on important themes in the city, including immigration, politics, industrialization and crime. 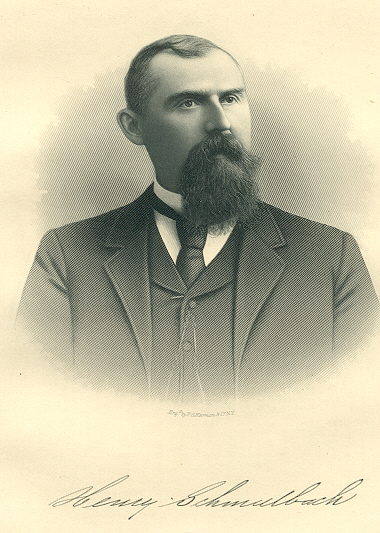 Hal Gorby, a teaching assistant professor at West Virginia University who specializes in immigration and working-class history in the late 19th and early 20th centuries, hosts the podcast.

Each episode is built around a theme in Schmulbach’s life, and also how it correlates with an important theme in Wheeling’s history.

For example, the first episode, “German Wheeling,” describes Schmulbach’s life as a German immigrant, while also explaining how immigrants have and continue to shape Wheeling today.

Six episodes will be available, with the second posting on Thursday, Aug. 22. Subsequent episodes will post on consecutive Thursdays.

In upcoming episodes, listeners will learn more about Schmulbach’s life in wide-open Wheeling — his philanthropy, his corrupt influence on local politics and how he may have murdered a man in 1878.

“This is Wheeling Heritage’s first venture into storytelling through podcasts. We are continually looking at ways to engage more people in Wheeling’s stories, and as audio storytelling grows, we realized this was a great opportunity to reach a wider audience,” said Alex Weld, director of operations for Wheeling Heritage.

“We can reach people who maybe don’t like attending a lecture, reading a dusty old book, going on a walking tour or visiting a historic site,” Gorby said. “As a multi-episode podcast, it allows listeners to hear Henry’s life advance with the city. It’s also just plain fun, too, getting to hear about the good and also not-so-good parts of our history.”

Although Gorby had already done extensive research on Schmulbach, even he learned about the brewer’s life throughout preparing for the series.

“I was really surprised by how much extra history I learned through the research about Henry’s life, which I thought I knew pretty well already. In particular, the role he played in efforts promoting the German culture in Wheeling,” Gorby said. “I don’t think people realize how German Wheeling truly was in the late 19th century.  I hope the podcast gives them a better sense of this cultural heritage and how it was ultimately lost.”

Along with being educational, the podcast is fun to listen to, Weld said.

“I think it’s a really approachable way to learn about history. The music and the interviews and some of Hal’s humor really add a lot to it and set the stage. It paints a realistic picture,” she added. 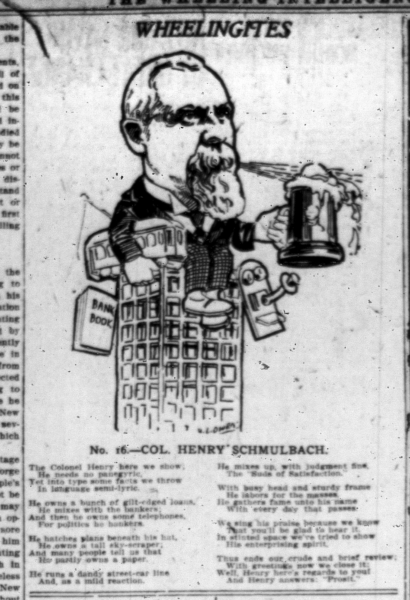 Henry Schmulbach was the subject of a political cartoon in The Wheeling Intelligencer, January 1906. Hear more about it in the podcast.

“Henry: The Life and Legacy of Wheeling’s Most Notorious Brewer” is available on Spotify and iTunes (search for Wheeling Heritage).