The world today is a small one. Just think about it. With a few connecting flights you can literally find yourself on the other side of the planet in less than 24 hours. Have an urge to talk to that friend who’s living abroad? In mere seconds you can be connected to them and not only hear their voice but see their face in real time.

All too often we hear the phrase “it’s a small world” in reference to those conveniences we enjoy today. But to Wheeling resident Ed Phillips, that phrase has a more literal sense than a figurative one.

In 1965, Ed began dabbling in the hobby of building small-scale scenes or dioramas. His interest in the art form began with designing and making military miniatures or “toy soldiers,” as he refers to them. Eventually, his work morphed into recreating scale-model battlefield scenes that brought to life some of the most famous conflicts of the 18th century.

Now at 80 years old, Ed shows no signs of slowing down anytime soon. He researches and works on his miniatures at his leisure, putting no time limit or restrictions upon himself in completing them. Depending on how he feels, he will spend anywhere from an hour to several hours a day on his hobby. In the time he has practiced his tedious talent, he has constructed over 100 dioramas and still has 30 to 40 in his home, each vastly different but without question, detailed in the most extraordinary ways. 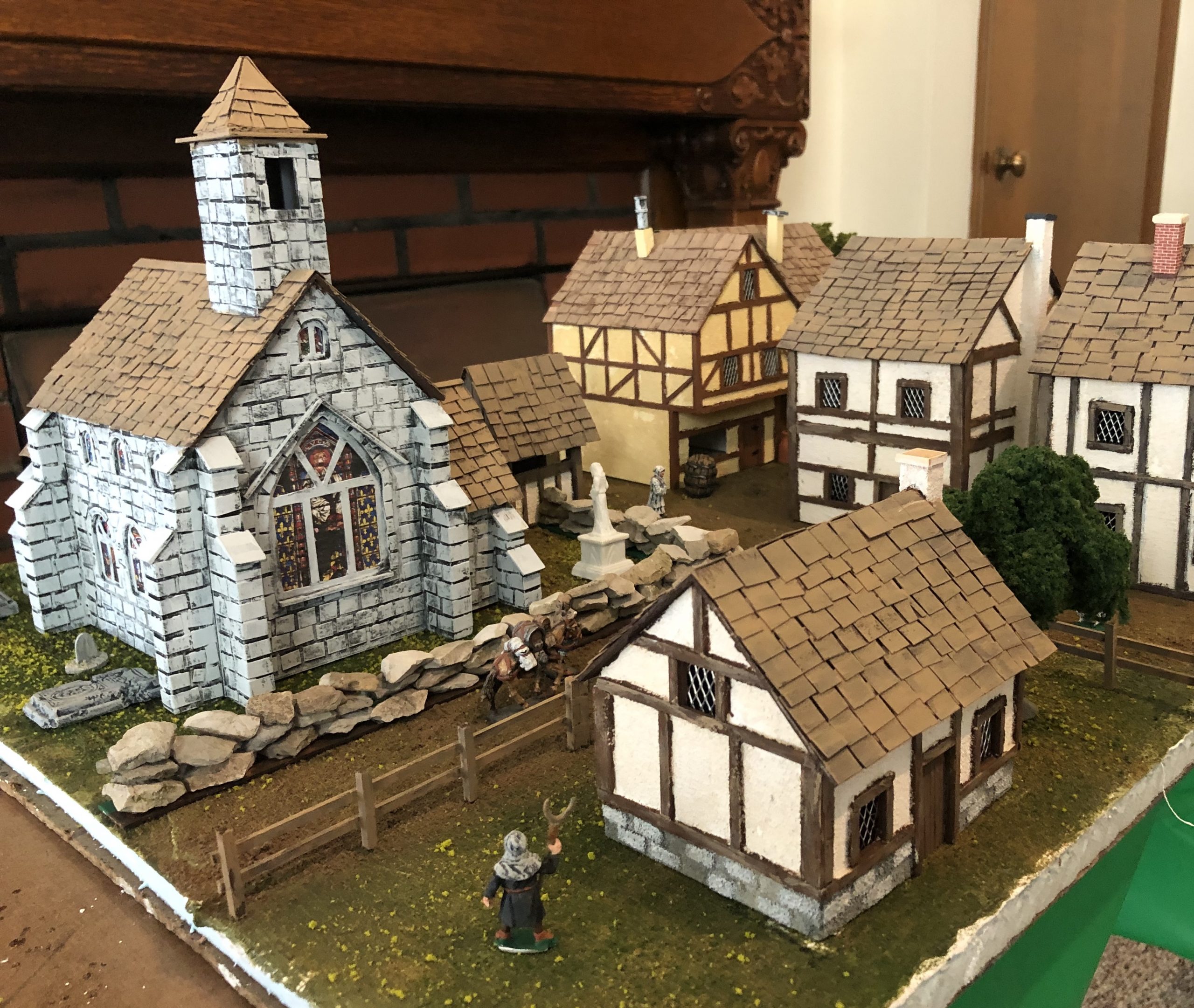 A typical Tudor-style English village greets visitors to the home of Ed Phillips.

About 10 years ago, Ed began to seriously delve into his hobby by building large-scale scenes. A self-professed admirer of the Colonial period, many of his dioramas are inspired by some of the era’s most famous colonial cities, but not exclusively. Others stem from 16th-century European and Russian architectural styles. Up until the effects of COVID-19 wrecked plans and gatherings around the world, he was attending three conventions a year, including the Seven Years War Convention where he often sells his excess Colonial period models.

But before any work on such a project begins, the 2001 West Virginia History Hero thoroughly researches his subject matter. Devouring whatever materials he can get his hands on, Ed then converts that research into tangible, viewable objects for the viewer. For Ed, history isn’t simply meant to be read and imagined, it’s to be seen.

Using primarily cardboard and balsawood to bring his scale creations to life, he first determines the approximate size of the structures he seeks to recreate, followed by determining what details of the buildings he will incorporate. Once that foundation is established, he begins crafting on a small card table using only an X-Acto knife and small scissors. The results are nothing short of amazing.

Passing through his spacious 1893 apartment home, one is immediately in awe of the works before them. A small Tudor period English village greets visitors while framed portraits of some of history’s most famous individuals, such as Prussia’s Frederick the Great, stand watch over the entry. Upon entering Ed’s study, the immense collection of miniatures and dioramas is readily evident. Dozens of formations of perfectly positioned 18th century military units carrying battle flags line the built-in oak case shelves, all of which he tediously hand-painted using descriptions of each unit’s uniforms. For Ed, authenticity and accuracy are no exceptions — they are the rule.

If the sights beheld in the study are not amazing enough, a short walk to a large room in the rear of the apartment will certainly raise your eyebrows.

A funeral cortege, led by a black hearse adorned with four black plumes and drawn by two black horses, approaches the house of worship. Around the village, daily activities are being carried out by various hand-painted figurines; a well-heeled lady of leisure has her portrait painted beneath a shade tree; farmers tend to their crops and farms on the far end of the make believe town; a man tends to city hall’s garden encased by an elegant black wrought-iron fence.

Upon even closer inspection, viewers will find the likeness of the Grim Reaper standing upon a bluff overlooking the town — a humorous touch by Ed who quipped, “death was very much present in that [Colonial] period!”

Building each structure takes a different degree of time and patience according to Ed. For example, the typical Colonial style home requires each wooden shingle to be individually cut and set in place.

“I use a form of tree bark that I purchase through local retailers to make the roofing shingles for each house. Each building is made to an approximate scale of 30mm, which is equal to six feet,” said Ed. 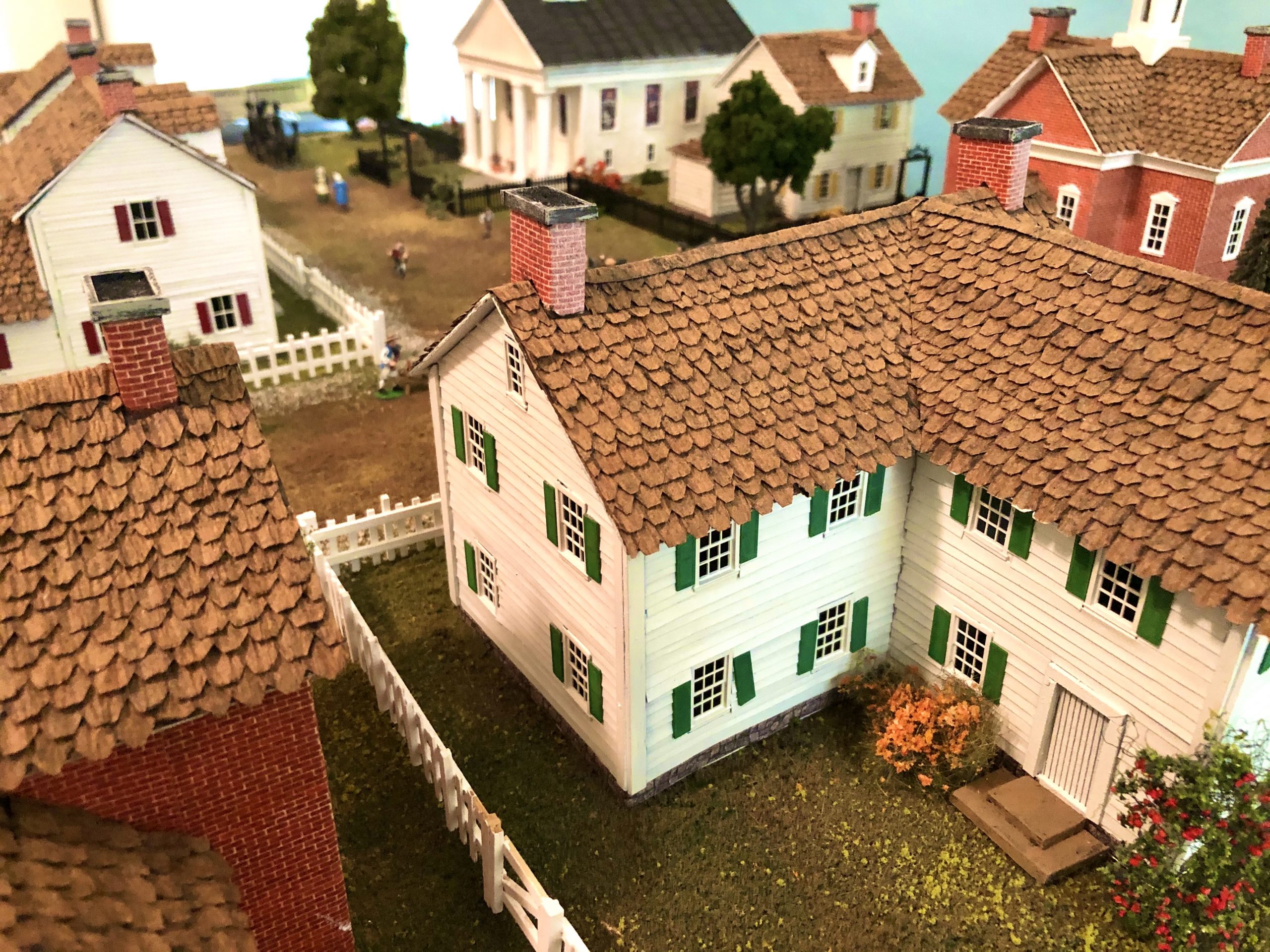 Each rooftop is created using a form of tree bark that gives the appearance of real wooden shingles that Ed hand cuts and places.

Not all of his works are fictional creations, however. Several years ago, Ed partnered with Wheeling boat model builder John Bowman to recreate a well-known waterfront scene of Wheeling and steamboats that was displayed for a period at Oglebay. Using the original 1900 photograph and other historical descriptions, Ed and John were able to accurately build a scale model replica measuring six feet in length.

“Some of the buildings in the photo still exist but others have been torn down. We had to take measurements of each building and then measure the gaps in between where the former buildings stood in order to scale it properly. John built a model of the steamer City of Wheeling, which was the boat shown in the photo, and added it the diorama. We then enlarged the photo and so that we could use the hills in it as a backdrop behind the buildings to really bring the scene to life.”

Authentic signs across the storefronts as well as a recreation of the former Pennsylvania Railroad Station and rail lines with trains complete the spectacular ensemble.

Situated mere feet from the colonial village rests yet another impressive work. Modeled after the extraordinary main house of France’s Palace of Versailles, Ed incorporated a few style and historical liberties inspired by Russian and Italian influences.

Drawing inspiration from St. Petersburg’s palaces, he painted the exterior a bright pink and declared Catherine the Great, resplendent in a green and gold gown in the front courtyard, as mistress of this regal manor. Military officers in full dress alongside an honor guard of soldiers stand at attention as the great empress passes in review. An ever-faithful Orthodox priest looks on as a portly gentleman and a lady-in-waiting follow closely as she makes her way toward a gilded red coach drawn by four Windsor grey horses.

Ominously perched on a shelf overlooking the palace is a guillotine surrounded by a mob of cheering proletariats who have just witnessed a bourgeoisie execution — a stark warning to neighboring Catherine and a reminder to all that the Palace of Versailles was built by Louis XIV, enjoyed by Louis XV, and most certainly paid for by Louis XVI and Marie Antionette. 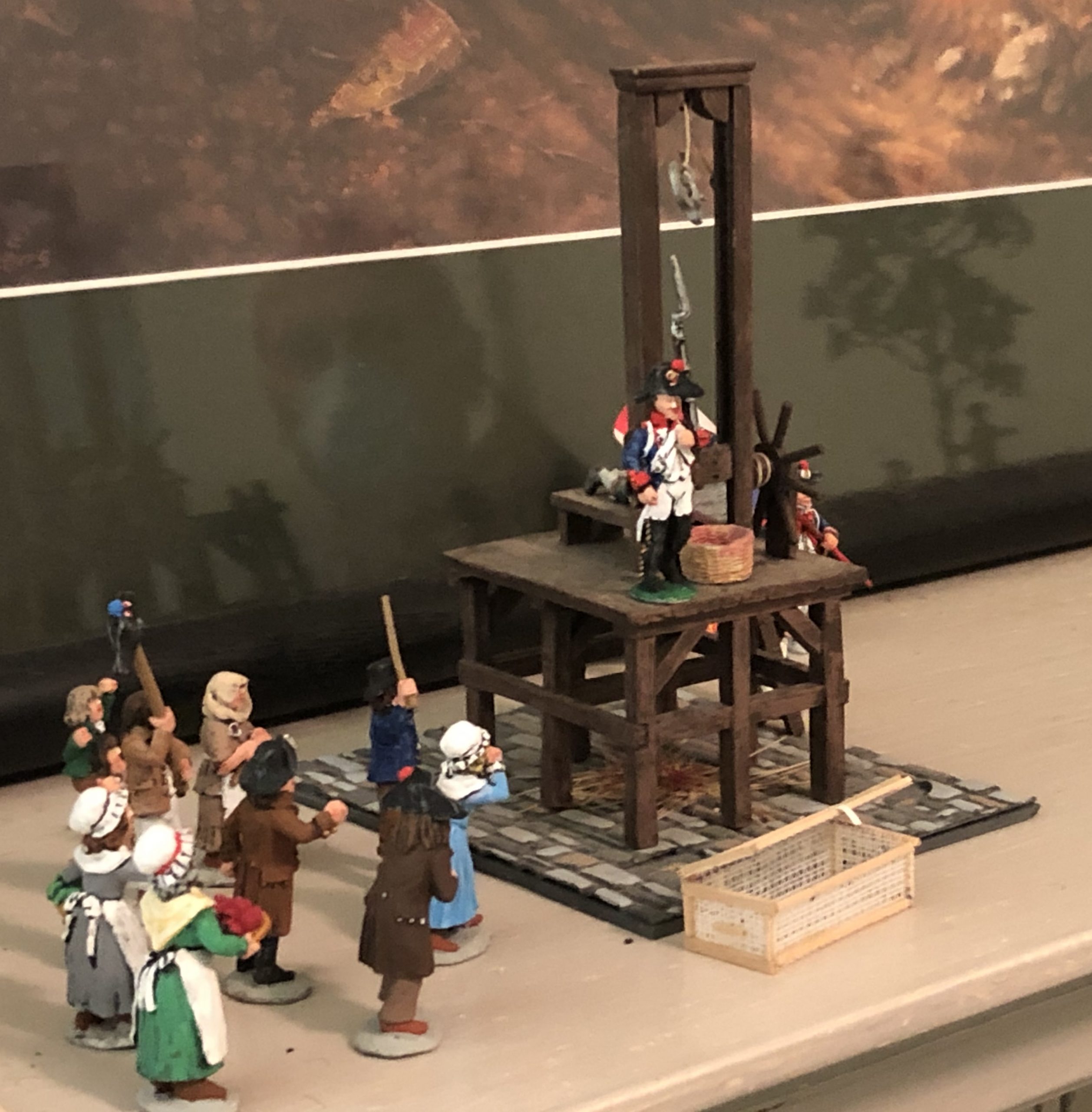 A mob of people hail the use of France’s “national razor.”

Continuing on with our European tour, Ed’s stunning replica of France’s famous Chartres Cathedral gives observers a view of the house of worship through which only God could possess. Each stone on the façade and every stained-glass window was meticulously replicated for full effect. When he first constructed the model, he intended to light the inside to give the stained-glass a warm glow but determined that to be too lofty of a goal. To substitute his original plan, he simply found photos of the original windows, scaled down the digital images to match the size of his window frames and viola! Outside the great entry doors of the sanctuary, a church prelate presides before a priory of busy monks. Statues of church saints and biblical characters stand watch over the medieval icon. Only the sounds of a booming organ and choir from within could make the scene more realistic. 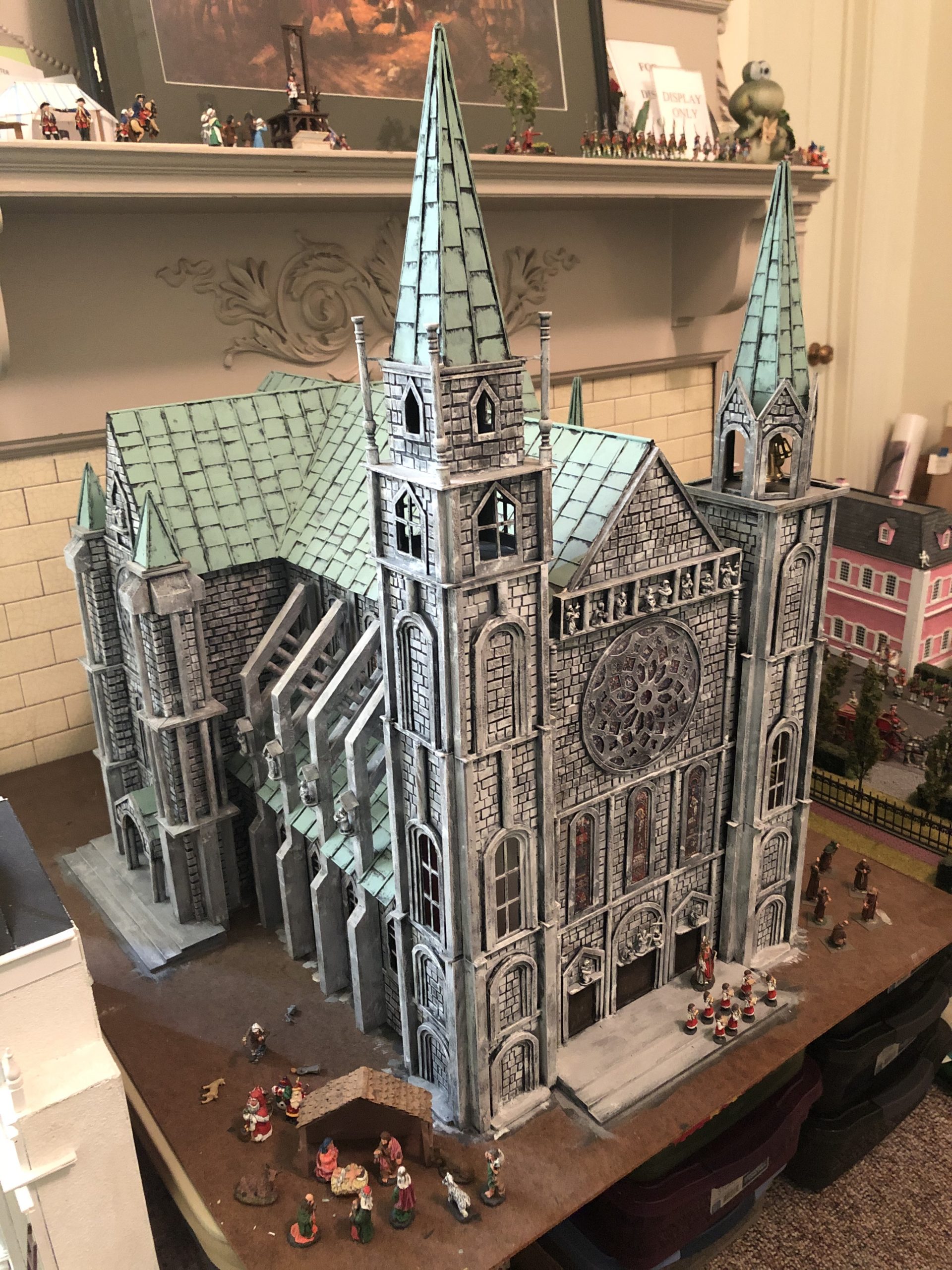 One of Ed’s most incredible works of one of France’s most famous Gothic structures, Chartres Cathedral.

DELIGHT IN THE DETAILS

Model after model, I was awed by the fascinating and meticulously constructed scenes. For me, it’s the small details that make the scene. Multiple passings of each revealed something I had missed before. Whether it was a specific pattern in a rug authentic to the period, an accurate shutter on a Colonial home, to a vine growing up the side of a brick building — no detail went left to chance.

Ed’s work continues to bring history to life across a wide spectrum in a fun and interesting way by letting the scene tell the story. Few possess the patience or talent required to build and capture history the way Ed does. Yet, he does so with an enthusiastic passion and attention to detail driven by a desire to make history come to life in a way everyone can understand and appreciate.

• Taylor Abbott is the treasurer of Monroe County, Ohio, and was born in Wheeling, West Virginia. He is a graduate of Ohio University and is co-founder and president of the Ohio Valley River Museum. He serves on the board directors for the Sons & Daughters of Pioneer Rivermen and is an advisor to the Ohio River Museum in Marietta, Ohio. He enjoys hiking, travel, historic preservation and restoration work. Taylor resides in Clarington, Ohio, with his wife Alexandra in a former church they purchased in 2016 and renovated into their home.