John Travolta as “Danny,” and Olivia Newton-John as “Sandy”?

Yes, that “Grease,” and the movie will play Friday evening drive-in style beginning around 9 p.m. in the large parking lot at Wheeling Park. In the event of rain, the showing will be moved to the sheltered ice skating rink and the crowd will be welcomed to set up their chairs for the movie.

The film will be displayed on a raised and inflated screen that measures 21 feet diagonally, and lot attendants will be present to direct traffic. Those driving larger vehicles will be asked to park in the rear of the designated area that will be in front of the pool location.

And hiding away in a vehicle’s trunk or covered truck bed will not be necessary because admission is free.

“I can remember hooking that wired speaker up to the car window and making sure we got our popcorn before the start of the movie,” said Wheeling Park operations manager Nat Goudy. “It was a good time, and now we’re going to try and bring it back. The screen is not going to be as big Elm Grove or Glen Dale had so it might not be in the grand fashion like it was in the old days, but it will still be an opportunity for today’s parents to give their kids those same kinds of memories. 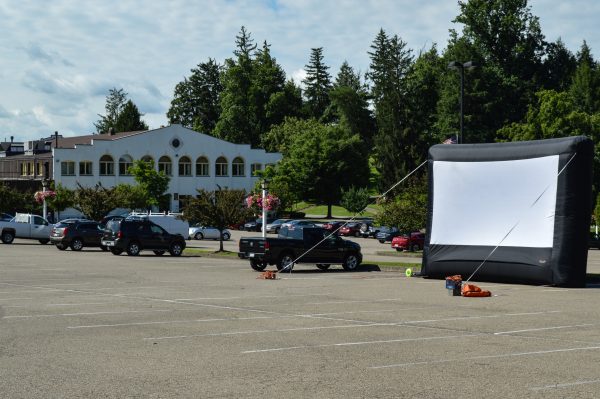 The inflated screen will be raised about four feet off of the parking lot surface and will be placed at this location for the first movie night at Wheeling Park,.

“We have received a great reaction, and people are already making suggestions for the movies we show in the future. Apparently, a lot of people want us to show a scary movie,” he continued. “And, at first, I thought we might get a dozen cars out here for the first one, but now I’m thinking we might get a pretty big crowd because people just seem to love the idea. That’s why we have decided to do a new movie every other Friday while the kids aren’t in school.”

The schedule has not been determined at this time, but even when the listing is complete, the Wheeling Park Commission cannot release it to local media outlets for promotion because of the agreements made with the distribution companies. Members of the media, however, can request the information and promote the schedule on their own.

“We are just trying to keep doing fun things at Wheeling Park to try and keep it fresh and active,” said John Hargleroad, the direction of operations at the park. “And ‘Grease’ is a great movie, and I am very glad to start this series with a movie like this.

“The movies that we show in the future will be the ones that have had a wide appeal and do have a relatively short runtime because the parents are going to want to get the kids home at a decent time of the night,” he said. “And I can tell you that we have never received so many calls for more information for anything else we have done here at Wheeling Park.” 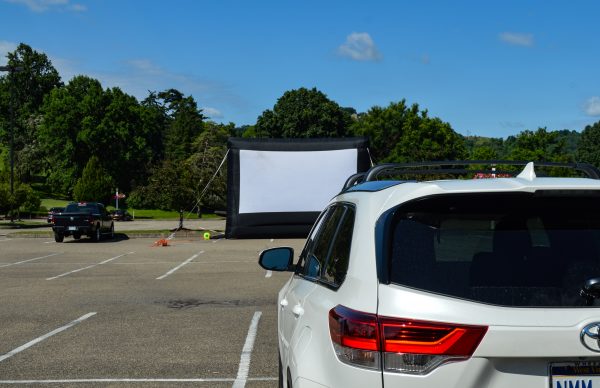 Instead of placing those historic speakers on car windows, those who attend will be able to hear the movie by dialing up 106.1 FM on their vehicle’s radio.

“The screen will be in the rear pf the end of our parking lot, and the concession stand will be very close to the Stone Room and the pool, but we’ll be away from where most of the golfers like to park when they play our course during the evenings,” he explained. “That way we will be able to have the restrooms in that building for people to use, and where the screen will be located, we think no one will be blocked by someone with a pretty large truck or a van.

“We will have staff members out there, and we are going to try to keep the smaller cars in the front and the larger vehicles toward the back just to make sure everyone can see OK,” he said. “And it’s going to be a family friendly event so there will not be any alcoholic beverages allowed because we want parents to feel as if they are in a safe environment with their children.”

The musical movie, released in 1978 and adapted from the Broadway show, tells the story of high school seniors during the late 1950s. The film’s soundtrack features 26 different songs and includes several scenes with the “T-Birds” and the “Pink Ladies.”

The sound for the movie will be broadcast at 106.1 on your vehicle’s FM dial.

“We have purchased and tested the FM transmitter, so the people who come can pick the sound up on their car radios, and we’ll also have speakers near the front in case someone doesn’t want to use the radio in their vehicle,” Goudy said. “From that point, we decided to give it a try to see if the people in this area would be interested in something like that. I believe it’s going to be a lot of fun, and I believe the kids and their parents are going to really enjoy this. 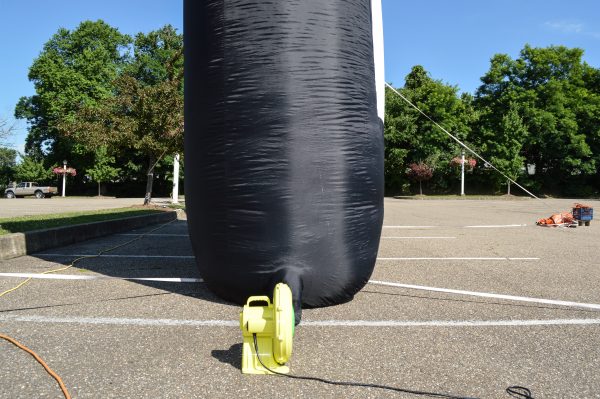 The inflatable screen was purchased last year for movie nights inside the Wheeling Park pool.

“The first movie that we selected is one that I have enjoyed since it was released, and the first time I saw it was when my parents took me to the Elm Grove Drive-In, and I loved it,” the 44-year-old said. “Most of the people my age and a little older know it very well, and when my daughter, Maria, saw the movie, she loved it, so that’s why I believe it’s a great one to start with.”

Management at Wheeling Park implemented the “Dive-In” movie nights at the pool last summer, and last week an estimated 60 swimmers enjoyed, “Charlie and the Chocolate Factory” while wading in the water. The swimming pool-based series will continue until local children are summoned back to the classroom, and the same strategy will be employed with the drive-in Friday night, as well.

“The kids we have now haven’t had that the way I did when I was growing up, and the only one left here in the Upper Ohio Valley is up in Wintersville, and they seem to be having some issues with making the upgrades that they need to,” he said. “That’s when we started brainstorming to figure out if we could pull it off, and I believe we’ve come up with a pretty good plan.”