Search
Home
Athletics
There are nosebleed seats, courtside seats and everything in between. But three Wheeling men will have a view of the basketball action as March Madness descends that money can’t buy.

They’ll literally be on the court — so close to play that they’re watching the sweat drip off collegiate players’ chins and the anger flash in their eyes when calls don’t go their way. They’ll be the ones making the calls, in fact.

“We have the best seats in the house,” said Tony Chiazza, who has officiated for men’s NCAA Division I basketball for 15 years.

During a brief break in an intense travel schedule, he shared his love of the game with Weelunk. 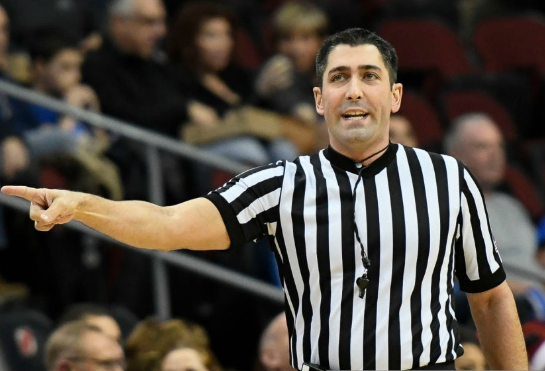 Wheeling referee, Tony Chiazza, will have plenty of time to reconnect as the regular season gives way to the intense round of tournament play known as March Madness.

“It’s just like any other team,” Chiazza said of a camaraderie that exists among the guys whose uniforms feature black and white stripes rather than school colors. “I can go to a lot of places in the country and, if I need something, I can reach out.”

He, Stakem and Gaus all flagged that friendship as their favorite part of officiating games. And it’s something that starts from the get-go, Stakem said, noting it’s a difficult business to enter without a connection to explain what avenues to pursue and which to avoid as an independent contractor.

He and Gaus began working together nearly 20 years ago, officiating local games through the YMCA in the Elm Grove neighborhood of Wheeling. With the help of Stakem’s father-in-law, longtime college official Floyd Shuler, and other region-based officials such as the late John Howell and the late John Holt, the men began to branch out.

“They can get you there,” Stakem said of the importance of having a mentor. “But they can’t keep you there. It’s a very competitive business.”

Gaus and Stakem said they now enjoy paying it forward by mentoring younger referees who often aren’t much older than the players on the court.

Chiazza, who has also officiated in Divisions II and III, said that all-for-one spirit plays out no matter the size of the college backing the teams on the court, which is what determines division.

“The games are important at any level … especially to the players and the coaches,” Chiazza said of officials working together to maintain a sport they love.

ON THE ROAD AGAIN 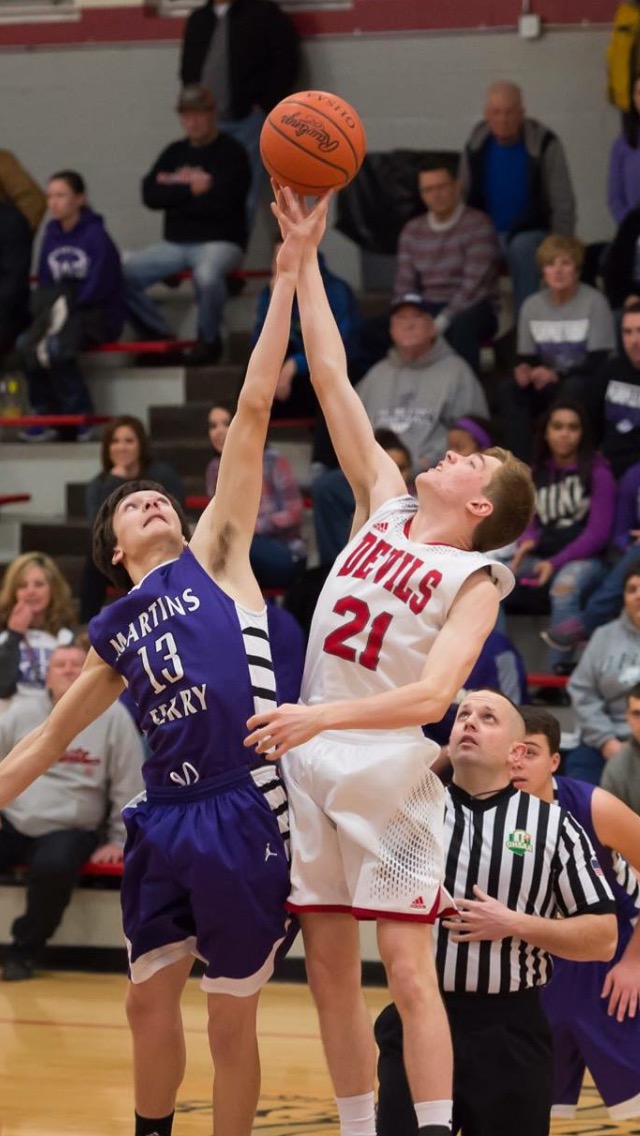 Bryan Gaus keeps a close eye on a tip-off.

Officiating means plenty of travel. Stakem and Gaus travel by car and limit their trips to a three-hour radius around Wheeling. Working farther-flung Division I games, Chiazza must fly. And fly some more. He was home a mere four days in February, in fact.

“I’m pretty much juggling my real job and traveling all over the country,” Chiazza said of the overall season, which began in November and wraps up with the few weeks of tournament play known as March Madness.

Chiazza, who was in North Carolina on the day of his interview with Weelunk, said his duel career works because his day job with an online sports equipment and apparel company can be done remotely. From an airport, from a hotel room — it’s all good.

This freedom from location allows him to officiate between 70 and 80 games per year.

Stakem and Gaus also have other employment — Stakem with the family-run Hole ‘n Run sports store in Wheeling, and Gaus, who is a former state trooper, as an investigator for state prosecutors in Marshall County.

Because their day jobs are region specific, Stakem and Gaus still travel as much as four times weekly, but limit their officiating to about 50 games per year and to those that are closer to home.

All over age 40, the three local officials acknowledged it takes more than a command of game rules and a quick eye to referee. The average game means two miles of running alongside athletes who are in their physical prime.

“One thing stays the same — it’s the age of the student-athletes. But we’re getting older,” Stakem said. “With the speed now of the game, even at my level, you have to be in good shape. If you can’t beat these kids up and down the court, you’re not going to be able to do your job.”

And the horse has to come before the cart, Gaus said. “You don’t referee to get in shape, you get in shape to referee.”

For Chiazza, who is officiating at the top player-skill end of the game, that means year-long discipline.

“Once basketball is over, I don’t even take a break,” Chiazza said of a cardio, core and weights regimen he hopes will keep him in the game until he’s well into his 50s. “I go to the Wellness Center religiously.”

Ironically, he said he usually gains weight during the season, when constant travel interrupts his workout schedule and limits his food choices. 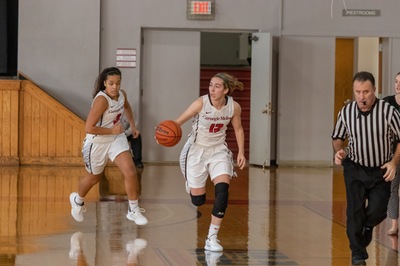 Eric Stakem stays a step ahead of players during an NCAA Division II game. Stakem and the other local officials said maintaining fitness is critical to working games in which the players will always be in their late teens and early 20s.

Beyond the need for core fitness, there’s a certain amount of wear and tear on official’s bodies that cannot be avoided, Gaus added.

“By the end of the season, you start to hurt,” Gaus said, noting he can literally feel which gym floors are laid over concrete. “Postseason (March Madness) is a refreshing new start.”

Stakem agreed, adding that tournament play also signals the “light at the end of the tunnel in terms of travel.” That’s important for part-time officials.

“It’s a vocation for Tony (Chiazza),” Stakem said. “For us, it’s an avocation … It keeps old guys like me in shape and that little bit of extra spending money is nice at the end of the year.”

The other thing officials have to keep in shape is their mental toughness, according to all three men. Calls can cause controversy. Coaches and players don’t always behave. Nor do fans.

A referee has to be able to deal with it all — then return to the game with a laser-like focus.

“Time makes you better, but it’s still tough,” Stakem said. “When you have a confrontational conversation — particularly with a thousand people watching it from the stands — it’s not easy and it’s not much fun.”

Stakem noted that experience also helps him tell the difference between rowdy fans and something that could turn dangerous. He also talks with both team captains before play begins, urging them to listen to officials for the sake of the game.

Gaus agreed that watching and talking are key. “Positive communication can really cut off a lot of things at the pass.”

Chiazza, who officiates televised games, said it is also important to be able to block out controversy over calls.

“I’ve got to react in a second to full speed,” he said of play that coaches, players and fans have the luxury of reviewing multiple times and in slow motion.

“It takes a different breed,” he said of developing that skill. “It doesn’t get easier, but you get used to dealing with it and find ways to block certain things out or defuse certain situations.” 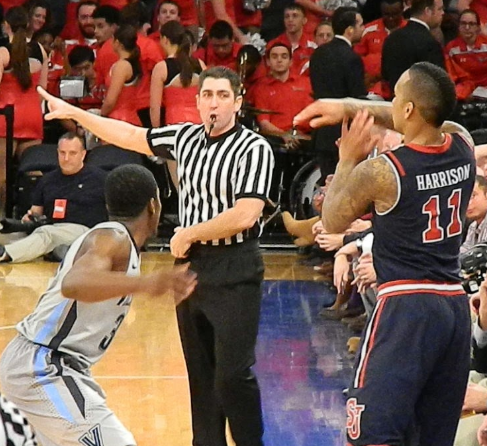 Players and officials sometimes agree and sometimes they don’t. Here, a player and Tony Chiazza lock eyes as Chiazza rules on a play during an NCAA Division I game.

Ideally, especially in a televised game, officials are focused to the point of near invisibility, he added. “You’re an important aspect of the game, yet you want to stay under the radar and not really be seen.”

A sense of humor doesn’t hurt, either, Stakem added.

That certainly came in handy when he officiated a game in Pittsburgh immediately after a holiday vacation with his family.

“I left my contacts in my other bag. I had to wear my glasses,” Stakem remembered with a grin. “I was just waiting for it — ‘Foooouuuur eyes!’ And sure enough, it eventually came. That was the last time I did that.” 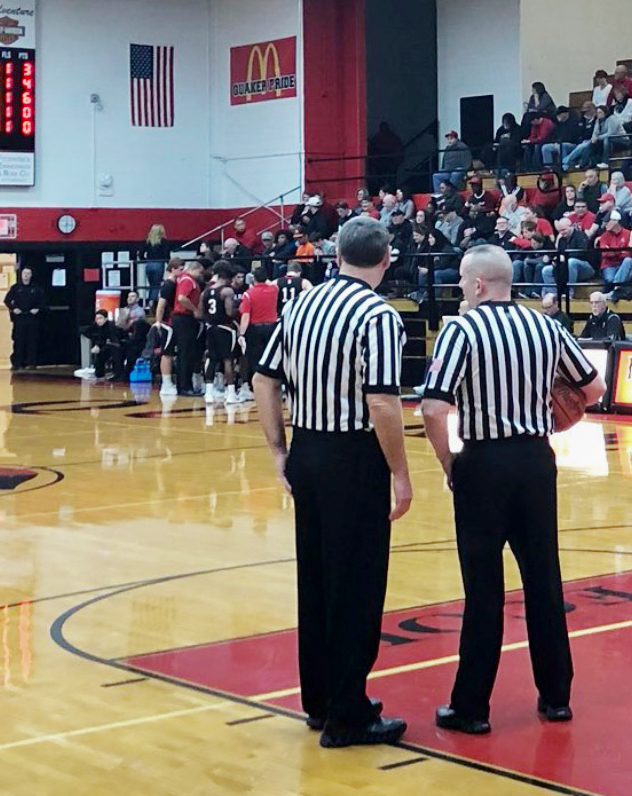 Bryan Gaus, right, who officiates for smaller colleges through the NAIA and has worked high school games, confers with a fellow referee during a game.

In the regular season or tournament play, the possibility of both ephemeral basketball glory and a little bit of weirdness also make officiating fascinating, the men said.

Chiazza is intrigued by upper-level play that is so competitive there’s almost an element of luck to outcomes — making for exciting games. “There’s so much parity (in terms of quality of players) that even a smaller Division I team can win.”

Gaus said certain games are so spectacular they can stand out. One from three years ago was such a game.

He was officiating a sectional final between Magnolia High School and Wheeling Central Catholic High School boys. Chase Harler, who now plays for West Virginia University, was playing for Central and Preston Boswell for Magnolia and the skill of the athletes was a bit of magic.

There was also a 2005 game that Gaus and Stakem won’t forget. They were both officiating at Alderson-Broaddus College in Philippi when a dog wandered onto the court and, in an unrelated incident, the power went out, plunging the gym into blackness.

“I remember standing on the floor yelling, ‘Get to your benches,’ because I couldn’t see a thing,” Stakem said.