Wheeling: Show Your City Some Love

Wheeling is a beautiful city. I said it – deal with it. In spite of our many vacant lots, dilapidated storefronts, and property hoarders, in spite of the unintentional park we now have between Main and Market, and in spite of the tear-down mentality that has dominated our city for decades, Wheeling remains a beautiful city. Believe it or not, people actually come to Wheeling for the express purpose of studying our impressive stock of Victorian architecture. In spite of all we have lost (and continue to lose via negligence and neglect), it does not take much imagination to walk down our streets and envision Wheeling in its turn-of-the-century heyday.

As with anything beautiful that you see every day, there is a tendency to sometimes take it for granted. For example, I can tell you that my daughter is the most beautiful little girl in this world (That’s not opinion;it’s fact.), but there are some nights when that gets lost in a 2-year-old’s translation of love (crying, screaming and general unhappiness at the hour of her bedtime). The same can be said about how we view our city. So often we walk our sidewalks and streets with our head down or consumed in conversation. How often do we walk with our heads up, taking in our beautiful, if not careworn, streetscapes? This month’s Lovescaping campaign aims to attract your gaze to take in the beauty of some of our historic (and perhaps most importantly, available) properties in downtown Wheeling.

Now in its third year, Lovescaping has become an increasingly popular activity among our young and young-at-heart preservationists. Lovingly borrowed from Buffalo’s Young Preservationists (BYP) “heartbombing” campaigns, Bekah Karelis and Liz Paulhus, founders of Wheeling Young Preservationists (WYP), initiated the “All We Need Is Love” campaign in Wheeling in February 2013 to highlight historic buildings in downtown Wheeling that were vacant and/or architecturally significant to the fabric of the city. The term “Lovescaping” was actually the brainchild of Wheeling’s own Brian Wilson and has been catching on with some other young preservationists groups across the country.

To say the bar has been set high for 2015 would be an understatement. In the first year of Lovescaping, Glenn Elliott found his eyes drawn to the lovely granite façade of the Professional Building on Market Street, and he soon became enamored with the building. He credits his initial admiration for the building to the bright crocheted and knitted hearts that adorned the façade during the inaugural Lovescaping, and we will take that credit! After several months of careful consideration, Glenn purchased the building in September 2013 and has been working on it ever since.

Whereas the 2013 Lovescaping campaign was targeted at specific properties, the proliferation of cardboard and construction-paper hearts during the 2014 campaign may have lost some of that impact. Seeing a handful of historic properties profusely decorated is more likely to draw your attention than three dozen historic and modern properties throughout the city. As such, this year’s Lovescaping has been reined in to focus on six properties currently for sale as well as the “Blue Church,” a landmark East Wheeling structure that WYP was instrumental in saving. It is WYP’s hope that this targeted, site-specific Lovescaping will strike pay dirt yet again and take one or more of these properties off the ‘available’ list. Properties to be decorated for the 2015 Lovescaping campaign include the following: 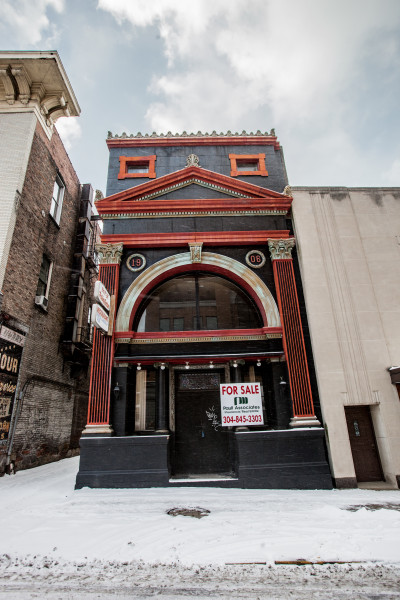 Bank of the Ohio Valley (Peking Garden) – ca. 1906 (32 – 12th Street) – Located in the heart of the downtown business district, the former Bank of the Ohio Valley (bought out in 1933 by Wesbanco) is today better known as the former Peking Garden Chinese Restaurant. The beautiful façade of the building remains entirely intact, a clever paint job giving the building a distinctly Asian feel. This property offers tremendous opportunity for restaurant or office space in an area that sees heavy foot traffic during business hours. 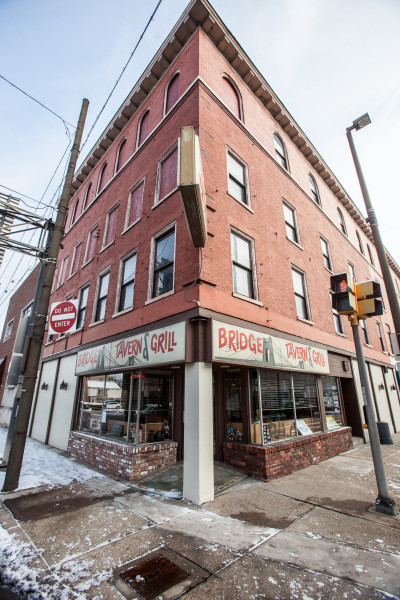 The Wheeling Hotel (Bridge Tavern) – ca. 1926 (948 Main Street) – A hallmark eatery/gathering spot/Cleveland sports bar, The Bridge Tavern & Grill has been in operation for 58 years. With the rebirth of the Capitol Theater and the Stone Center, the intersection of 10th & Main Streets is seeing more foot traffic today than it has in several decades. The upper floors of the building served for many years as the Wheeling Hotel, which shuttered in the 1970s. This space remains virtually intact and could easily be returned to service as a boutique hotel or as rental apartments. The opportunities with this property are endless! 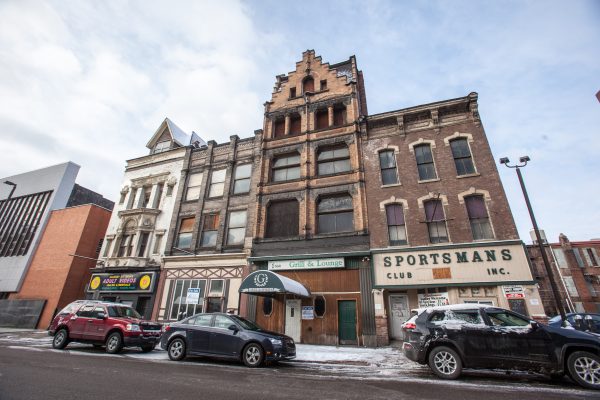 Sportsman Club – ca. 1884 – (1425 Market Street) – Known for more than 60 years as the Sportsman Club, this building likely dates to the mid-1880s. The building served a variety of functions over the year including a cigar works, pre-prohibition saloons, a car company and hotels. The first floor of the building serves as a bar while the upper floors have been abandoned (although otherwise intact). Zeller’s Steak House (G&G/Erica’s Bar) – ca. 1882 – (1429 Market Street) – Another late 19th century building that served as a number of businesses over the years, including an early dry cleaners, saloon, hotel and restaurant. Of particular interest is the period in the 1940s when the building served as Zeller’s Steak House. Owned by renowned Wheeling crime boss Big Bill Lias, the steak house doubled as a casino for Wheeling’s high rollers. The building is currently vacant. Wheeling Candy Kitchen (vacant bar) – ca. 1900 (1431 Market Street) – The third building in the Market Street Row. Originally operating as a tailory, the building housed the Wheeling Candy Kitchen for a number of decades. Most recently a bar, the building is now vacant. 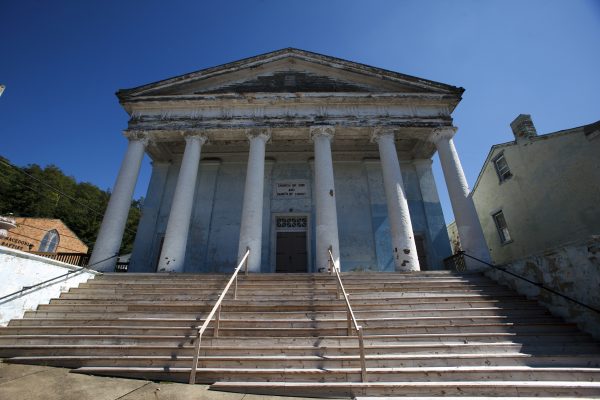 The Blue Church – ca. 1837 (1206 Byron Street) – Originally St. Matthew’s Episcopal, this church has served a number of congregations over the past 170 years, most recently the Church of God and Saints of Christ. The property was put up for sale in 2013 and through herculean efforts on behalf of Wheeling National Heritage Area Foundation and WYP, the property was purchased. Restoration work will get under way this year with plans for a mixed-use arts facility.

Much like the Lovescaping concept, the Wheeling Young Preservationists (formerly the Ohio Valley Young Preservationists) are also undergoing transformations. A six- member steering committee has been working for several months to bring a greater sense of unity, direction, and collaboration to WYP. At a recent organizational meeting, old and new members voted overwhelmingly to change the name from OVYP to WYP, reflecting the Wheeling-centric focus of the group and its members. The steering committee will continue to guide WYP, drafting bylaws and articles of incorporation and spearheading subcommittees and working groups, while WYPpersnappers (too much?) will help to grow the organization through active participation in these subcommittees and in WYP’s myriad projects.

Anyone who would like to participate in the Lovescaping should meet this Saturday, Feb. 7, at 10 a.m. at River City Restaurant. Decorating should run until 2 p.m., unless we have a big crowd and finish sooner! There the decorations will be handed out and buildings assigned. Each building will remain decorated for two weeks, at which time we will look for volunteers to help take down the decorations (Saturday, Feb. 21). As preservation and reuse go hand in hand, we aim to use many of these decorations for years to come.

As an extension of our annual Lovescaping campaign, WYP wants to show our city’s buildings that #Wheelove them, and encourage you to do the same! Please share photos of your favorite buildings on our WheeLove Facebook page along with the reasons why you love them. This is your opportunity to share your stories — a building history, restoration story, childhood memory – anything that encourages conversations and offers encouragement to those who may not be aware of all the positive projects and rich history that surround us. Make sure to add the hashtag #WheeLove to your Facebook photos as well as on Twitter and Instagram.

If you are not able to participate in this year’s Lovescaping campaign, WYP would ask that you simply take the time to notice these buildings during your commute or your walk to lunch. Each of these buildings has a unique story to tell and is a part of the fabric of our downtown Wheeling community. Author David Giffels remarked on a recent trip to Wheeling that it is “more meaningful” to care for a building that needs you more than you need it, and that doing so is “self-perpetuating.” Make no mistake; we need each of these buildings as much as they need us. Wheeling – it’s time to show your city some love.