It’s contagious, this progress thing in the downtown area of Wheeling, and now Patrick Viola is in the middle of a long overdue façade project at Security Travel on Market Street.

Viola has owned and operated the travel agency since the mid-1980s and has been located across from the McLure Hotel for the past 21 years, but over time, the front of his structure has faded from dirt brought by the heavy traffic that passes on a daily basis. But since Wheeling’s council has re-developed a program to subsidize façade improvements in the downtown area, Viola finally decided to move forward with the project he’s contemplated for several years.

“There was a loan program through the city for a few years but we didn’t initiate this project at that time although we really wanted to,” Viola explained. “But when some positive things started happening here in the downtown, it convinced me that I needed to get this building looking way better than it does today. I knew I wanted to get it nice again.

“I’ve watched the re-development of a lot of things here in the downtown, plus the construction of The Health Plan headquarters really made me catch the fever so I could be part of an up-and-coming downtown Wheeling,” he said. “It’s the resurgence of the downtown has me very excited because it’s something we’ve been waiting for over the last decade or so. I thought something good might happen after Mayor (Andy) McKenzie pushed for the buildings to come down in the 1100 block, and that’s exactly what’s taken place.”

The new grant program fostered by city government is available on a first-come, first-served basis as long as the allocated $150,000 lasts, and all applications are reviewed by two city staff members, officials of Wheeling Heritage or a local designer/architect, or by a member of the city’s Historic Landmarks Commission. The program involves a 50 percent reimbursement of no more than $15,000. Owners of structures located along Chapline Row and in Centre Market are eligible as well as buildings in the downtown area. 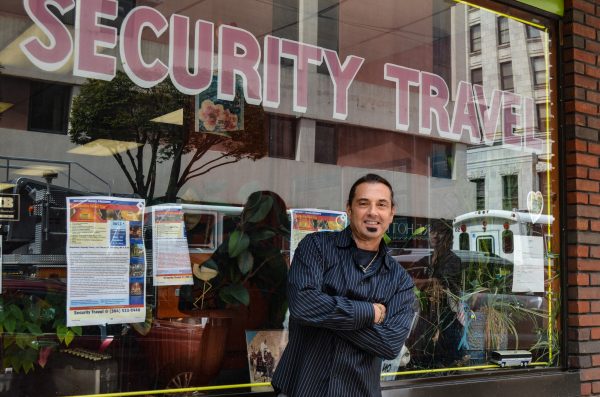 Patrick Viola returned to his hometown in 1986 at the age of 25 to purchase Security Travel, and he moved to his current Market Street location in 1996.

Viola said his façade renovation is projected to cost approximately $12,000, and he is pleased half of that expense will be covered by the city grant.

“I first got on board with the Friends of Wheeling, and they were excited for us, and we were approved for a guaranteed 3 percent loan,” Viola said. “We were about the pull the trigger, but then Jeanne Finstein called me and said that she had heard that the city was re-developing its façade program that included grants for facades.

“A couple of weeks later I heard about the new program, and I did the application process through the city, and the Friends of Wheeling helped me tremendously with all of the guidelines so I could qualify for one of the grants,” he continued. “Then I worked with the city to get everything in order so we could finally get this project in motion.”

And it did get moving last weekend with employees of Oberle Painting LLC arriving at Market Street to initiate the power-washing process. However, there was a so-called bump in the proverbial road.

“We got the project started last weekend, and as with most of these kinds of projects, something came up that we didn’t really expect,” Viola recounted. “When the painting company started to power wash the front of the building to get the three or four layers of paint off the façade, all of the mortar came shooting out everywhere. It covered our sidewalks.

“That’s when Chris Oberle told me that they couldn’t move forward with the painting because the mortar was all over the place,” he said. “That’s when he had to get the materials so he could re-mortar the entire front instead of painting. That’s why the painting, hopefully, will take place this weekend.” 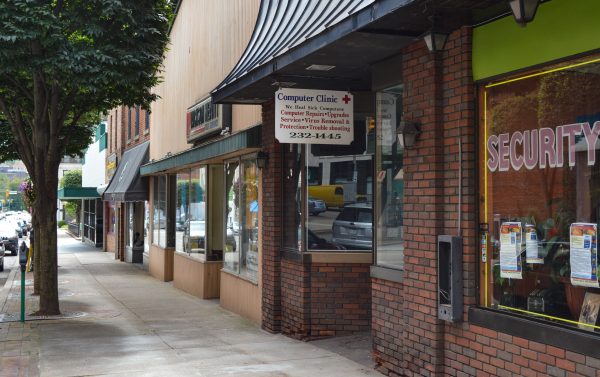 Security Travel is located across Market Street from the McLure Hotel and adjacent to the Computer Clinic and the Vagabond Kitchen.

Although he was living in California at the time, Viola purchased Security Travel in 1986 and was located in the lower lobby of the former Security National Bank for the first 10 years. But then Security National was purchased by Chase Bank in 1996, and that’s when he searched for a new location in the city’s downtown district.

“I packed up, and I came home to buy Security Travel, and that’s what I’ve been doing ever since,” Viola said. “I moved out there because I wanted to chase the California dream I guess, but when my father told me about this opportunity I saw it as a great chance to come home. I was only 25 years old when I made that decision.

“I drove across country with all of my belongings stuffed into my car after only making ends meet out there,” he recalled. “Once we were told we had to move out by the Chase people, I looked at 22 different properties because that’s really when we had the most vacant buildings in downtown. But we found this one in 1996, and we’ve been here since, so now is a great time to renovate the building to get it back to its original appearance.”

His façade now appears scraped and worn, but Viola’s plan includes fresh colors consistent with the plethora of renovated Victorian buildings and homes in the Wheeling area that were constructed in the mid-19th Century. He has selected a light ivory shade with blue accents and different trim colors, too.

“Now that the layers of paint have been removed, you can really see the Victorian influence the building was constructed with in the 1860s,” Viola said. “It’s still all in very good shape because, well, the way they built things back in those days, so it has us excited to see it when it’s all finished.

“It was contagious for me after seeing all of the other improvements taking place around us, so I am hopeful that other property owners see what we are doing and will decide to do it, too,” he continued. “I know the owner of the building south of us is planning to do a façade project, too, that will really enhance this stretch of Market Street.”