Catherine Moore came to Wheeling on a professional mission, but her venture also was a part of a personal undertaking of her own.

Moore is employed by “What’s Next West Virginia,” an organization with representatives traveling the Mountain State in hopes of spurring community-based conversations about the future of the state. The initiative has partnered with the West Virginia Center for Civic Life, West Virginia Public Broadcasting, and the West Virginia Community Development Hub.

“It’s an initiative that’s encouraging dialogue and action in communities around the state related to our economic future,” Moore explained. “We are discussing how to build stronger, local economies and how to ensure prosperity for the future in the context of the downturn in manufacturing and mining jobs that have traditionally been the bread-and-butter of our state.

“Now that those are winding down, what’s going to be the next thing? That’s the question that we are asking and that we are encouraging others to ask in the state,” Moore said. “Many people already are asking that question.” 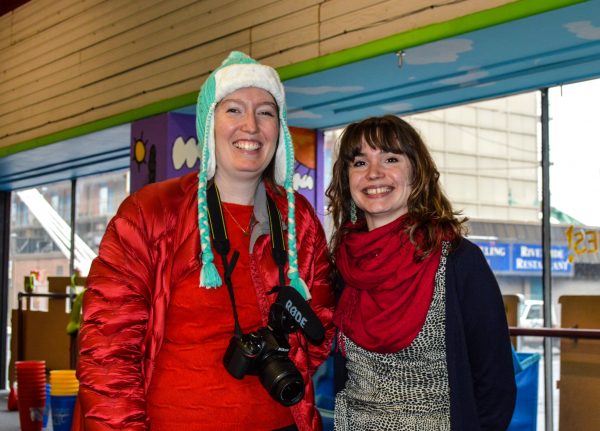 Catherine Moore spent four days in Wheeling in an effort to discover how and why the Friendly City has attracted natives and newcomers to move into the city. Here, Moore visits with Patricia Croft, the director of the Children’s Museum of the Ohio Valley.

The state of West Virginia possesses many different cultures and employment opportunities within her borders, but economic decline and population loss have occurred in nearly every one of the 55 counties. Reversing that trend led Moore to the Friendly City.

“We heard about Wheeling because “What’s Next West Virginia” did a workshop here for people who wanted to come and get some training and resources and then go out into the community and hold these conversations,” she explained. “When the executive director of the Center for Civic Life, Betty Knighton, was up here doing a workshop, she noticed that many of the participants were under 40.

“She felt like there is a lot of young energy in the room, a lot of ambition, and frankly, a lot of hope,” Moore continued. “When she returned, she said, ‘There’s really something going on in Wheeling, and we should do a story on it.’

“Part of my job with ‘What’s Next’ is to capture stories about communities that are thinking about the future, taking action to ensure a more prosperous future, and we felt that there are so many communities across the state that are just dying to attract young people and retain young people. West Virginia is an aging state, so we thought that maybe there’s something that Wheeling can teach the rest of us,” Moore said. “What makes for a good environment for young people? That answer may be here in Wheeling.”

The story, which Moore said would not be published and broadcast until later this month at the earliest, will be one of a five-part multi-media series that targets what is working in some communities to offer possible direction for other citizens around the state.

“The focus of my story on Wheeling is trying to get at the how’s and the why’s involved with this resurgence of a new, youthful energy,” she said. “Why are young people here? How and why are they able to get so involved in the community work? What is driving that, and what can we learn from that?

“I think the generations have to work together, and that’s what I have seen here in Wheeling,” she said. “Getting people of all ages involved is what is working, and that’s something everyone would like to see happen across West Virginia.”

And she was welcomed with open arms during her four-day visit.

“Everyone I’ve talked to has been first of all really stoked that somebody has noticed what’s going on here,” Moore said. “The people have been very friendly and very accommodating and very willing to show me their window into the city.

“It’s been a beautiful experience, and I feel very lucky. This is my first time coming to Wheeling, so I feel really lucky that I get to come here under these auspices and talk to these community leaders,” she continued. “People have embraced me at every turn.”

Moore saw the scars of a Rust Belt city. She strolled past vacant buildings and empty storefronts, and she’s familiar with the tales of what Wheeling once was. But during her stay, she witnessed something else, too.

“I have seen this interesting mixture of old and new, and it seems like Wheeling, like a lot of the state, is at a transition moment,” she explained. “It’s a transition from a manufacturing-driven economy to the new economy, and I have seen this interesting blending of both things here. I’ve seen empty shells of buildings that have lost their former glory, but I have also seen a lot of those buildings being worked on and given loving care.

“In some cases those buildings are now occupied by young entrepreneurs who are working to build a different economy here,” Moore said. “There are things happening here in Wheeling that we would like to see start happening in many communities across the state.” 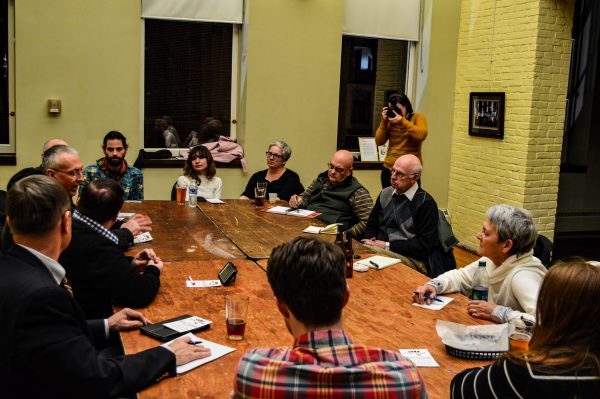 During her visit, Moore attended the monthly Arts Round Table at the Wheeling Artisan Center. The gathering attracts local residents that represent several different generations.

The monthly Arts Round Table took place at the Wheeling Artisan Center while she was in Wheeling, allowing her to witness several community members gathering with a common goal. Along with Jake Dougherty of ReInvent Wheeling and Erika Donaghy, the chair of the Wheeling Arts and Cultural Commission, Chris and Bob Villamagna, Marc Harshman (poet laureate of West Virginia), Susan Hogan, Patricia Croft, and Josh Benyo joined several others to discuss everything from the upcoming Arts Fest, an elephant sculpture, new businesses and upcoming events, and the mission of Weelunk.

“So I am encouraged to see that community forming here in Wheeling,” Moore continued. “I think we have to, as a state, do a lot of grappling to be able to keep momentum like this going and to continue to attract and retain community-minded young folks.

“And I do worry sometimes about a level of burnout when you are asking people to spend the majority of their free time building the thing that they want to see instead of just moving to a place where a lot of the infrastructure is there. It’s very different thing here. It’s a gift to be able to take that pathway to creating and building that thing that you want to see, but I also have to wonder how sustainable that is.”

Moore was raised in Charleston, and following her graduation from George Washington High School, she departed her native state for Harvard University. Following her commencement, she remained away until deciding to return a decade later.

She is a storyteller, and she wanted to tell as many West Virginia tales she could discover.

“I wanted to come back to West Virginia and give back to the state that I love with all my heart. I love the people, the landscape, the history, and so much more about West Virginia,” she said. “It’s like a vocation for me, and it was a calling I couldn’t ignore after being away for 10 years.”

She also had the opportunity for sit-down conversations with Wheeling residents Ron Scott Jr. and Glenn Elliott, as well as representatives of the Young Preservationists. Moore also visited several businesses such as the Bridge Tavern, Wheeling Brewery, and yes, even DiCarlo’s in Elm Grove.

“I had heard a lot about DiCarlo’s Pizza before I came here, and I made my first journey to the DiCarlo’s in Elm Grove because I was very interested in the unique approach to pizza. 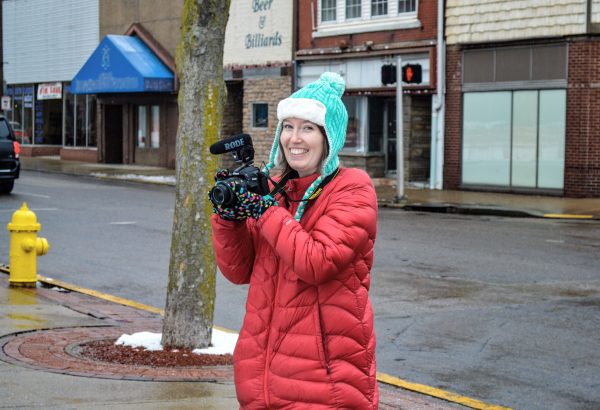 Moore ventured to each section of the city during her stay — including the downtown district and Elm Grove so she could introduce herself to DiCarlo’s Pizza.