He was considered a nerd who hung out with some old guy, the black sheep of his family known for slugging scotch, toking on cigars, and telling others their fortunes.

Some found this gentleman odd, but Craig Karges was fascinated, to say the least.

“My great-uncle, Alain DeLyle, was my mentor and teacher. When I was 13, I used to spend time with him after school. Not learning magic; I was already picking that up from books,” said Karges. “What he taught me was everything from reading people to learning how to trust my intuition. 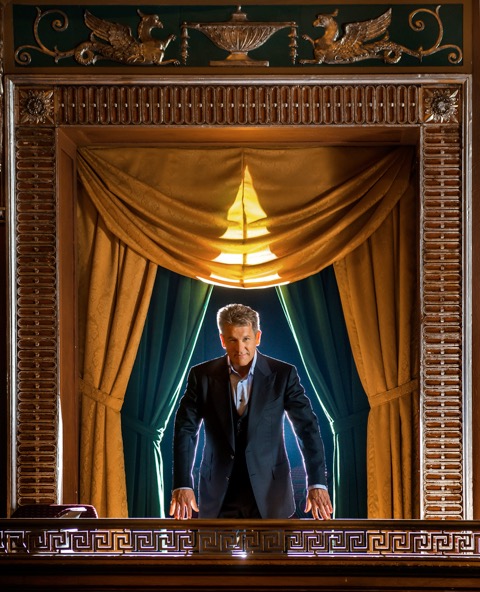 His amazing show is set for Oct. 22 at the Capitol Theatre, and it will benefit the Oglebay Foundation. (Photo by Mark Campbell, Prestige Photography)

“Everyone called him ‘Doc’ and he was quite a character. He was in his early 80s when I spent time with him,” he continued. “He died about a year into my studies with him. When he passed, I inherited all of his books and effects. It was like this giant jigsaw puzzle that I had to try and put together. I worked on that for a couple more years, and then, when I was about 16, I combined what my great-uncle had taught me with my stage magic and started to perform more as a mentalist than a magician.”

Despite ridiculing remarks from his Catholic school classmates, Craig Karges made his on-stage debut during his eighth-grade talent show at St. Vincent School in Elm Grove.

“When I was growing up, magic had no coolness about it. There was no David Copperfield, David Blaine, or Criss Angel, so some people thought it was a nerdy type of pursuit,” Karges recalled. “When I started practicing the type of things I do onstage now like mind reading, psychological persuasion, and the like, it could also spook some of my friends. I never hid the magic.

“My performances gave me all my spending money, paid my way through college, and when I graduated from Marshall in 1980, I hit the road and have never looked back,” he said. “I paid tribute to Doc in my second book, ‘The Wizard’s Legacy.” He’s the wizard, and I’m his legacy.” 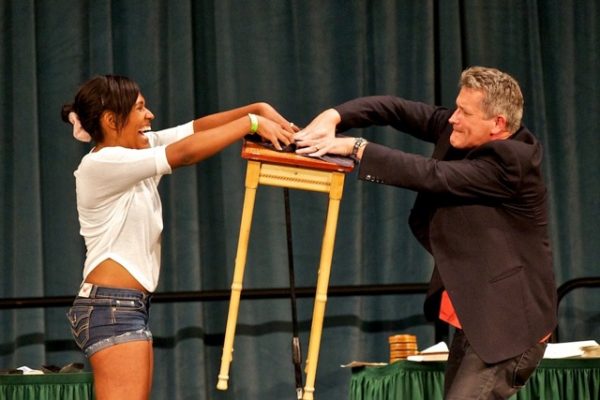 Karges is very popular on college campuses, including Sacramento State University in California.

His debut was a three-night stint, and Karges has clear memories of being trapped in a trunk.

“My most memorable experience was the closer to the act. I would be chained and locked into a steamer trunk. A curtain would be placed in front of it, and I would make my escape. One night I couldn’t get the trunk to open. I had timed music playing on a cassette recorder. The music ran out. The crowd was getting restless, some out of genuine concern and some out of boredom,” he explained. “I had the lock down, and I could see through the keyhole as Phil Harto, a classmate, crawled on his hands and knees to try and sneak over and help me get out. This was hilarious because the curtained trunk was in the middle of the stage, and there was no way to ‘sneak’ over without the entire audience seeing you.

“I kept yelling from inside the trunk, ‘Go back Phil; I’ll get out!’ He did, and I was eventually able to force the lid open and crawl out, covered in sweat, to take my applause. And you know what? It was the biggest applause for me during all three shows,” Karges recalled. “I think there was only one night when everything worked. This was my boy magician phase and before I started working with my great-uncle. I think I debuted my first show as a mentalist about four years later when I was 16. I continued to perform as both a magician and a mentalist through high school, but once I graduated from Central, I sold all my magic props and just concentrated on the mind reading and mentalism.” 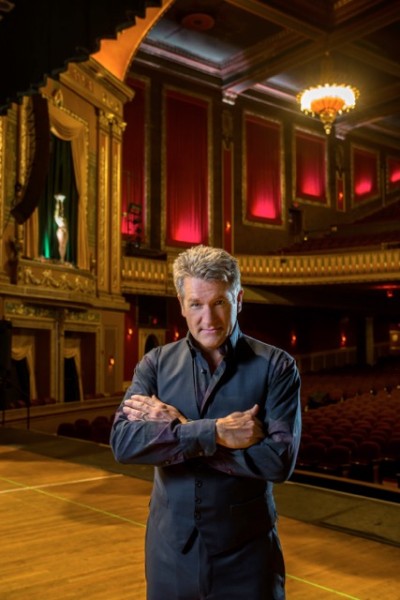 His 35-year career has taken Karges to all 50 states and to 22 countries across the world. (Photo by Mark Campbell, Prestige Photography)

And since, Karges has performed all over the globe, from Sardinia to Singapore and Cancun to Cairo. Karges has made over 40 national television appearances including “The Tonight Show” as well as appearances on CNN, Fox News, CNBC and E! Entertainment Television. He also has starred in two, one-hour television specials and is the author of three books.

“I’m currently up to 22 countries on four continents as well as all 50 states,” he confirmed. “I’m always excited to add another country to the list. We toyed with two or three engagements in India this year but weren’t able to work them out. But the show is total audience participation. It’s a blend of humor, illusion, psychology, and intuition. Tables float, minds are read. It makes for a crazy night.”

Karges is set to return to the Capitol Theatre stage in downtown Wheeling for the first time in more than five years. The performance is set for 7 p.m. on Oct. 22; the Spilman, Thomas & Battle, PLLC law firm will sponsor the show, and the event will benefit the Oglebay Foundation. 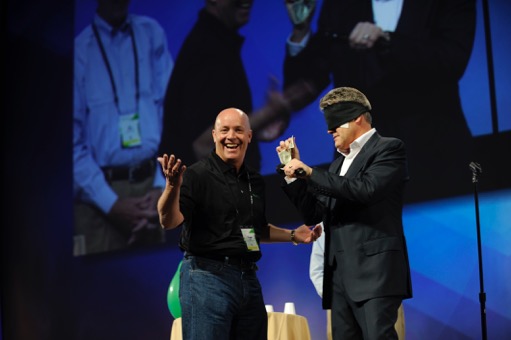 Karges is often hired by corporations to perform at events such as this one in Orlando.

Karges’ stage show, “Experience the Extraordinary,” is a 90-minute production that features total audience interaction as Karges reads minds, levitates inanimate objects, and makes complex predictions of what audience members will do, say or think. Tickets can be purchased by visiting https://www.etix.com/ticket/p/8373028/experience-the-extraordinary-with-craig-karges-wheeling-the-capitol-theatre, or by calling 304-233-4470.

“I don’t work in town very often except for the occasional private event at Oglebay, but that’s about it,” he admitted. “About 15 years ago we started doing fundraising shows for the general public. The first was at the Capitol for my high school alma mater, Wheeling Central Catholic High School, and then I did a Wheeling Symphony event at the casino. We followed that five and a half years ago with an Oglebay Institute fundraiser at the Capitol, and then three years ago we did a smaller event at Towngate. That one sold out in 48 hours because of the limited seating.

“I try to space these out as I’m a variety entertainer, and you don’t want the novelty to wear off,” Karges explained. “I always work on fresh material for a Wheeling show. I want to make certain repeat audience members are seeing something new and different, and that’s why the upcoming show at the Capitol will be 50 percent different from the one I did five and a half years ago.” 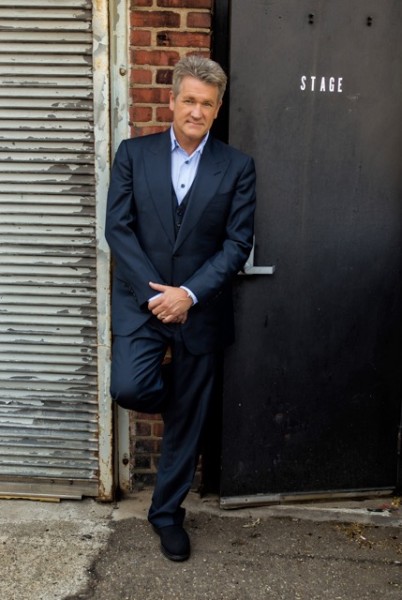 Karges has not performed on the Capitol Theatre stage for more than five years. (Photo by Mark Campbell, Prestige Photography)

He admits his favorite part of his performances involves reading the minds of those in attendance and witnessing their reactions to what he reveals, and that’s likely why Karges was presented with The Mentalist Award for notable contributions to his craft and why he was the fifth inductee into the National Campus Entertainment Hall of Fame. He also was named top performer in his field worldwide by the international Psychic Entertainers Association, and the National Speakers Association honored him with the Certified Speaking Professional designation and the CPAE Speaker Hall of Fame Award.

“I have the entire audience concentrate on any random thought, and I start to reveal information from the stage. It could be cell phone numbers, pets’ names, birthdates, favorite movies, favorite bands, what someone had for breakfast, anything at all,” Karges explained. “The different thoughts each night and the uncertainty of how it will go and whom I’ll be working with is what makes it interesting for me.

“I don’t try to get my audiences to believe in anything. I just want them to be entertained and have a good time,” he said. “I want to amaze them, make them laugh, and maybe send a tingle down their spine all in the same evening. If the show goes beyond entertainment, I like to think that it may open some minds to unlimited possibilities. 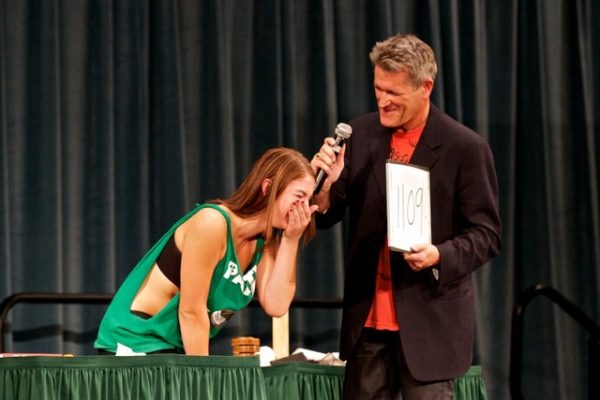 Reading minds is part of most of his shows, and the reaction of the participants is something he greatly enjoys.

He, of course, refused to divulge any of his secrets collected during a 35-year career, but Karges did admit most folks are capable of achieving the same things.

“In a nutshell, it is one part illusion. In other words, a magic trick – what you think you’re seeing is not really what’s going on,” he shared. “It’s also one part psychology – knowing people well, playing odds and statistics, reading and interpreting body language. The final piece is intuition. Basically, knowing without really knowing how you know. It’s an ability we all have; I think I’ve just learned how to cultivate it to a higher level.”

Karges has been featured in magazines and newspapers across the world, and his shows have won acclaim from some of the entertainment industry’s toughest critics, but yet he and his wife, Charlotte, continue to reside in the Friendly City although his travels in recent years have become more time-consuming than ever before.

“It’s home. Well, to me anyway,” he said. “My wife, Charlotte, is an import from Point Pleasant, W.Va., and we met while we were both at Marshall. I feel comfortable here. Wheeling is a nice place to live even though it has its challenges. 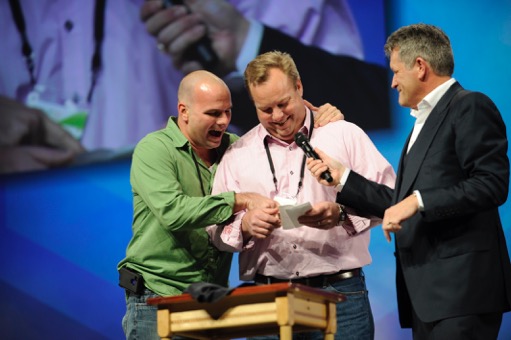 Intuition, Karges says, plays a big part when it comes to his on-stage performances.

“We’ve considered moving a couple times but always seem to be drawn to stay here. The Pittsburgh Airport situation has hurt. I didn’t mind the hour drive to the airport in the past because I could get on a direct flight to almost any major city in the continental U.S. I’d leave the house around 6 or 7 in the morning to catch an 8 or 9 o’clock nonstop. Now I leave the house at 4 or 5 and fly to a hub city, switch planes and then travel on to my final destination. Big difference when you’re flying 125,000 to 150,000 miles a year.”

When in Wheeling, though, Karges lives in relative anonymity, a fact he finds amusing and somewhat flattering.

“Those folks who do know who I am and what I do are divided into a few different camps,” the illusionist explained. “There are those that can’t believe the ‘boy magician’ they knew has made a 35-year career out of entertaining audiences. There are those who assume this is a ‘part-time job’ for me. And then there are many people who know what I do, where I’ve been, and are very aware of my career but have no idea that I still live in Wheeling!

“They assume I’m in New York or L.A. when the truth is, I’ve never left,” he added. “It’s always fun to go to the BluesFest or a hockey game, or most recently Irish Road Bowling, and have people come up and say, ‘What are you doing in town? Where do you live now?’”

Karges lives in Wheeling, and he’s not planning to vanish anytime soon.