He is known as “Sangil Malef” to the citizens of the village of Barombi in Cameroon. It means “Father of the Lake,” and that’s because Justin Forzano led the efforts to develop a water system for the poverty-stricken population.

Lake Barombi is a large crater lake located in the country’s volcanic chain, and at least 15 different species of fish have been recorded, but ways to use the water for hydration were not available.

“In 2007, I went to Cameroon with people from an engineering program when I was in school at the University of Dayton, and when we got there, we saw this lake and wanted to know what was on the other side of it,” Forzano explained. “We were told that there was a lake on the other side.

“It was a pretty big lake – maybe a mile or so across – but there was no road that actually went there. So we hiked it,” he said. “The first thing you have to do when you visit an African village is go see the chief. When we did that, he said to us, ‘You see how we suffer because this community lives with no road, no health facility, and no school.’ The future of this community was pretty bleak.” 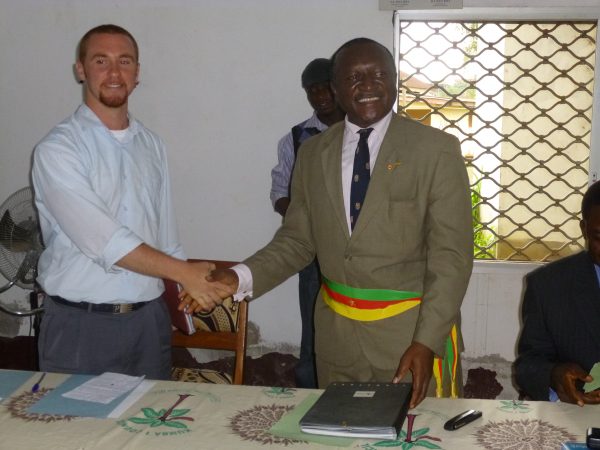 Since his first trip to Cameroon, Forzano has worked to improve the living conditions for the country’s citizens.

The group of Dayton students soon devised a plan to utilize and distribute the water to the citizens of Barombi.

“Cameroon is a very underdeveloped country, and most of the villages were in the same situation. But we were engineers, so we knew we could do something,” Forzano said. “So we decided to build them a water system. That’s when we returned to the university, and we got permission to do the project. And that’s when the time arrived for the fundraising.

“I asked my parents if they thought we could get Wheeling involved with it, and that’s how we came to do the steak fry in 2008,” he continued. “We raised more than $5,000 that year with a steak fry up at the old Graceland, and I went back to Cameroon to begin working on the project.

“We lived in the village for two months, we did construction every day, and everything was done by hand. We used no machines,” he said. “But at 4 p.m. every afternoon we would play soccer. Every single day. It’s a natural thing for them. This village had no road, but they had a pretty decent soccer field because of what the sport means to them.”

Forzano made an interesting decision before embarking on his first trip to Cameroon. Instead of researching the African nation, he chose to go in blind. 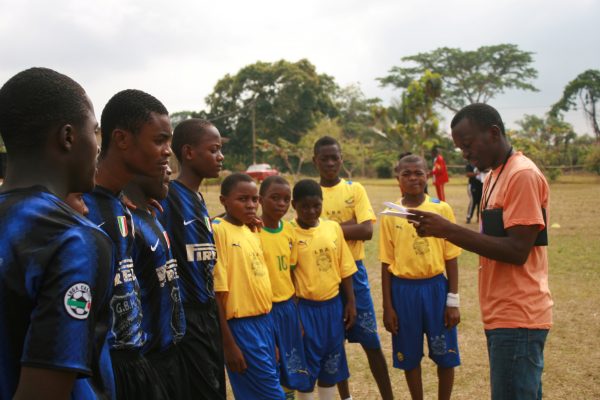 Children and adults of all ages participate in the soccer program, and social development has been made a part of the process.

“I had no idea what to expect, but I did that on purpose. I really just wanted to go there and experience it without any notions in my head before I arrived,” Forzano explained. “I went in clean, and the experience was this overwhelming feel of welcomeness, if there is such a word. Those people are so humble and so grateful. It was, in many ways, refreshing to me.

“It’s a culture that I am still learning because it’s really different from what we are used to in the United States,” he said. “And they have a completely different set of priorities than we do, and it takes a long while to get used to some of the differences.”

Before Forzano left on his second trip to Cameroon, he acquired a number of soccer jerseys from Wheeling Central Catholic High School and Wheeling Jesuit University. He noticed how seriously the sport was taken during his initial visit and wanted to do something for the men and women in Barombi.

“And I gave them to the people in charge of the soccer, and they immediately started keeping them in the chief’s house. Anyone who wanted to play a match while wearing them had to go see the chief and ask,” Forzano said. “Any time they were playing against a neighboring village, they would take the jerseys, play the match, and then come home immediately wash them by hand, hang them to dry, and then put them back in the chief’s house.

“They were just Wheeling Central jerseys from probably 1995, but they cherished them. To them, those jerseys became their uniform, and they traveled all the way from Wheeling, W.Va.” 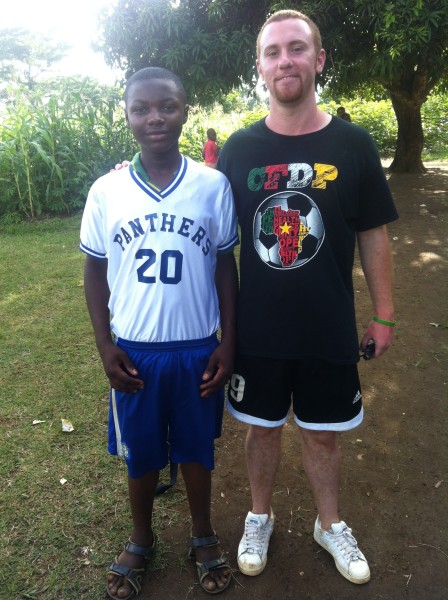 Educating the country’s youth is a priority of the Cameroon Football Development Program.

A soccer player at Wheeling Park High School (class of 2003) and an intramural participant at Dayton, Forzano returned to the Upper Ohio Valley after his two-month stay. He graduated from the University of Dayton in 2008, and then won a position with a civil engineering firm in Pittsburgh. But while he was working with a plethora of American municipalities, it was that Cameroon village that was often on his mind.

“I kept trying to figure out a way to help them again in some way to make their lives better because when we were there, they actually learned that no one else was going to do those kinds of things for them. They learned that they would have to do most of it themselves,” Forzano said. “The one thing that kept making sense was to do something that would improve their soccer. They have a crazy passion for the game, but they aren’t playing with the best equipment. They play with what they can get.

“So what we did was develop an education program that coincided with soccer. The whole purpose was to help develop social development and improve the future for that community and in the surrounding villages,” he said. “So my focus was on the game of soccer, on education, and on social development, and once again I came back to my hometown to see if the people here would be willing to help.”

Forzano’s parents organized the first steak fry fundraiser for the water system at the former Graceland Bar on Cherry Hill Road, but now the event centers on raising monies for the Cameroon Development Football Program. The organization is a 501-c-3 non-profit with an office in the East Liberty section of Pittsburgh.

This year’s steak fry is set for this Saturday evening at the Levenson Shelter in Oglebay Park, and the food was donated by Charlie Schlegel and Mark Thomas, the owners of Ye Olde Alpha. The donation is $20 person, and it starts at 6 p.m. and concludes at 11 p.m.

Since 2010, most of the public and private schools in Ohio County have held fundraisers, and all three high schools have offered sets of jerseys. The athletic department at Wheeling Jesuit continues to offer jerseys for both men and women.

“The people in Wheeling and throughout the Valley have been so supportive, but that’s how we are in this area,” Forzano said. “I think the reason I thought of this idea in the first place is because of where I grew up. That’s just how we are so I thought very hard about the best way to make the biggest difference in Barombi.

“The national soccer team for Cameroon was one of the best in the world in the 1980s and 1990s, and they shocked the world in 1990, when they went to the World Cup, and they beat Argentina,” he continued. “It meant everything to them because this little corrupt, poor African nation took down the number one team in the world. Soccer is like a religion in Cameroon. That’s just the way it is.” 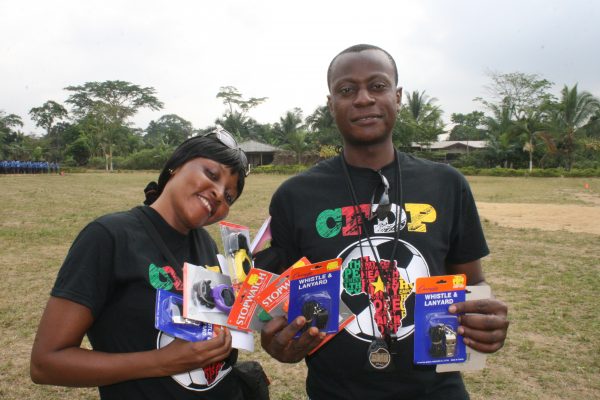 Uniforms, equipment, and community development are all new things that Forzano has brought to several communities in Cameroon.

Although the two official national languages of Cameroon are English and French, most of the citizens of Barombi spoke what Forzano refers to as “Pigeon English.” But that’s just one more reason why he now finds him the CEO of Cameroon Football Development with the primary objective of raising funds so the program can continue to spread.

“Instead of the kids in the village doing whatever they would be doing on the weekends, now those kids are going to the field to play and learn, and their parents are going to the field, too,” Forzano said. “So we are literally building a community around the soccer field, and we are helping the people realize that it is a very good idea to invest in the youth for the good of the future.

“Plus, we are educating the children through the game of soccer, and we call it ‘Plus-7 Soccer’ because each game they play is for 10 points and not just three for the win. The other seven points in our program really have nothing to do with soccer, but instead they are about social development more than anything,” he continued. “If they come on time, they get a point – stuff like that. And every match has an education theme or topic, and the referee talks to the kids throughout the game about the topic or theme.

“We are using the game of soccer as the conduit to education to improve the future for this community and other communities in Cameroon. We emphasize values like treating everyone equally, sportsmanship, and caring about someone even if they are on the other team. “

He’s been asked the question: “Why not help the children in America first?”

“We are doing something very similar in Pittsburgh at this time as a part of the ‘Pittsburgh Soccer in the Community’ program, and I would love to do something similar here in Wheeling someday,” Forzano said. “I’d love to get something organized for this summer for the kids at Laughlin Chapel, and maybe we could play the games at the new (J.B. Chambers Recreation Park) field.

“We saw the need in Cameroon because of a school trip, so we did something about it,” he said. “We’re going to continue those efforts in Cameroon, but we have started branching out in the U.S. too.”

Forzano admitted, though, that Cameroon and her people have captured his heart for very simple reasons. The country is controlled, he explained, by older citizens who are purposely clogging the ladder by holding onto key positions in both the private and public sectors.

“For a long time in Barombi the only goal the people had was to get out of there if they could. Those who could did, and those who couldn’t, were left there to suffer without any help from anyone,” he explained. “Since our first visit, the water system was installed, the soccer and education program were implemented, they are now working on the road to the village, and staying there isn’t such a bad idea anymore.

“The village has become my second home, hands down. When I go there, I feel at home,” Forzano said. “But it’s the people in Wheeling who were willing to do something for these people. Without them from the beginning, I don’t think it would have been possible.”

If you are interested in attending this weekend’s Cameroon Football Development Program Steak Fry, visit www.cameroonfdp.org for additional information. 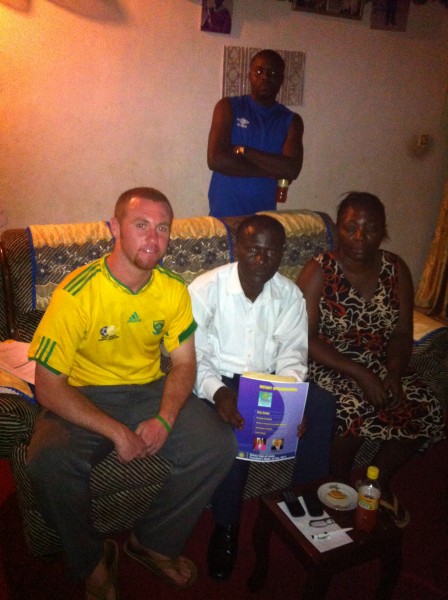 Forzano has become attached to the people living in the village of Barombi.