Not since February has ReInvent Wheeling staged a ‘Show of Hands’ event, but soon local residents will once again have the opportunity to pitch their business and project ideas to citizens and business and community leaders with the hope of winning more than $2,000 in prize money.

The event has been scheduled for Nov. 30 and will be held on the third floor of the Wheeling Artisan Center at the corner of 14th and Main streets. The application period started yesterday and will continue through Nov. 9, according to Jake Dougherty, the executive director of Wheeling Heritage who served as the director of ReInvent Wheeling for two years.

“The only thing that will change is the location of the event because we have decided to bring it to the Artisan Center,” Dougherty said. “We’re excited about that because it will allow some people to come early, get dinner and some drinks at River City, and then come to the third floor for the event. Plus, with the Robert C. Byrd Intermodal Transportation Center right across Main Street parking will not be an issue at all.” 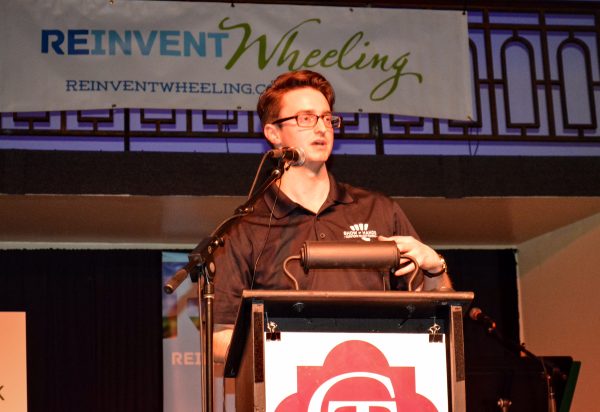 Jake Dougherty, now the executive director of Wheeling Heritage, is leading “Show of Hands” into its third season.

While the location will be different, all the other aspects of ‘Show of Hands’ will remain in place for the beginning of its third season.

“We are still discussing how we should handle the food and the beverages on the third floor, but those two things are going to be a part of the event as will the live music that we have featured during our past events,” Dougherty confirmed. “So we are exploring a few other changes that we believe will enhance the experience, but ‘Show of Hands’ will once again have that familiar feel to those who have attended in the past.”

Once the application process closes in three weeks, the “Show of Hands” Committee will review all those received in order to select four business and/or project ideas.

“What we are looking for are potential businesses or projects that will improve our downtown area, but we’re always very open to any project or business that can make a case for how they can impact the community in a positive way,” Dougherty said. “’Show of Hands’ is a platform for people who are creating projects and business ideas to pitch those ideas so that the community can also participate with the revitalization effort. 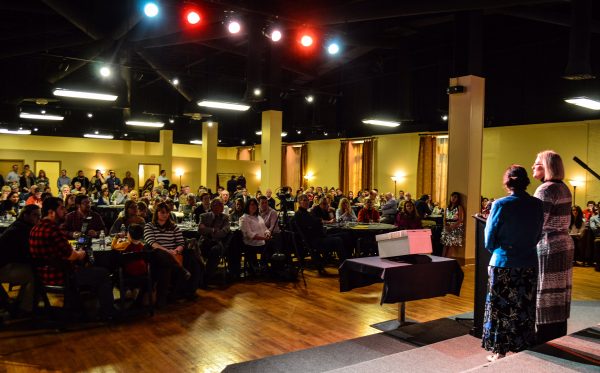 Rita Gupta and Lori Jones from the Wheeling YWCA make their pitch during the most recent event.

“Our committee looks at all of the applications so that we can make sure we are forwarding the best four projects that fit how ‘Show of Hands’ works. Our goal is to have an impact with the funds that we award to the winner,” he continued. “That’s why we make sure that the projects that are selected can really benefit from those dollars because we want to see those ideas become a reality for our city.”

That impact will grow during the third season thanks to continued commitment on behalf of international law firm Orrick, Sutcliffe & Herrington, a recent award issued by the state of West Virginia, and from other members of the Wheeling community.

“We have been working very hard at increasing the guaranteed amount that the winners will be awarded. Orrick is still our primary sponsor, and they will continue to contribute $1,000 to each event during this season. That support from them means the world to us, and I cannot thank them enough for taking a chance on us a few years ago,” Dougherty said. “We were also able to win the Governor’s Innovation Award from the West Virginia Department of Commerce, and that grant will allow us to add funds to the amount for the ‘Show of Hands’ winners this season,” he said.

“So that amount should be at least $2,000, and then the amount that is collected from those who attend the event will also go to the winners,” he continued. “Also, we have had a lot of people come up to our committee members and express their wish to help increase the amount, so that is why we are launching a new project that will be known as ‘Friends of Show of Hands.’ Those people have told us that they really like what is happening here and that they want to get more involved. 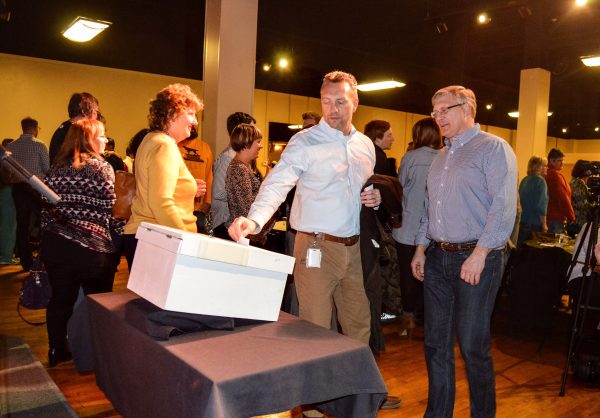 Wil Turani, the director of operations and sustainability for Orrick in Wheeling, casts his vote during the “Show of Hands” event in February.

“They want to see more businesses opening and more projects taking place in the city of Wheeling, so we are now looking for individuals who are interested in that effort,” the Wheeling Heritage chief added. “It would involve a $1,000 commitment over the span of a year, so it would be $250 per event, and those funds would go to the individual winner of each event.”

The doors will open at 5:30 p.m., and the event will get under way at 6 p.m. with a local musician performing. Each of the four participants is offered four minutes to present a business or project, and following the pitches, each participant will field four questions from audience members. At the end the audience members are asked to vote for their favorite presentation. The one that collects the most votes wins the prize money.

Those who attend are asked for a $5 donation that adds to the amount won by the presenter receiving the most votes. People who wish to donate $10 will be offered a couple of minutes at the microphone to promote a business, event, or a project of their own. 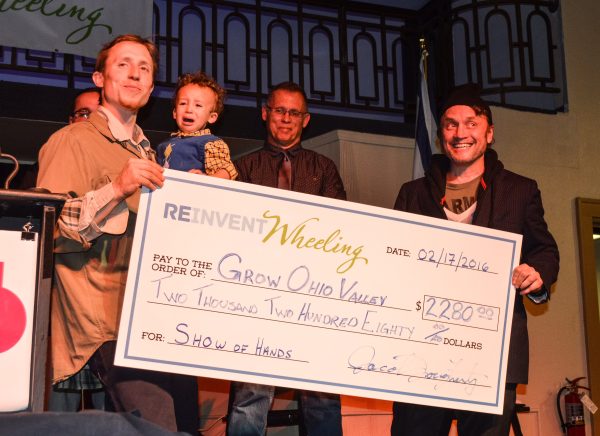 Danny Swann and Ken Peralta were successful in winning in February after the two Grow Ohio Valley officials pitched the Grandview Grocer idea.

“I believe things are coming along with our downtown district, and we are seeing a lot of development taking place at various sites around town,” Dougherty said. “And there are a lot of discussions that are taking place that involve some real substantive issues that can change the way our downtown functions. We’re seeing a concentration on the heart of our city.

“I think it’s amazing, and I am fortunate enough to be able to travel around the state quite a bit to participate in several different functions and continue to find people who are looking toward Wheeling because we have an energy they want to duplicate. ‘Show of Hands’ is a part of that energy,” he said. “That is not something that is present in other cities around the state or even around the country, so we have a chance to take some major steps during the next few years.”