So the story goes …

I walked in to the Alpha for lunch one day in 2014, and Jason Koegler introduces me to Junior League of Wheeling President Lori Kenamond. We had pleasant exchanges between strangers with a handshake, a nod, and a smile that ends with the old cliché, “Let’s do lunch.”

A month goes by and Lori, John Moses (YSS CEO), and I are sitting in the Alpha having lunch. We order polenta, a burger, and the special soup challenge. It must be Thursday, right? By the end of lunch John asks Lori, “What can we do for you?”

She responds with a surprised look on her face: “What? You want to do something for us?” Apparently, Lori had not experienced that before, but by the end of lunch we agreed to meet at the Jane S. Altmeyer Playground at Heritage Port to help shovel mulch. 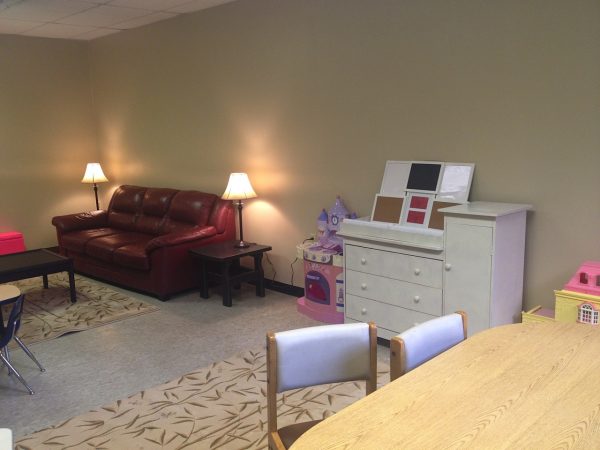 This visitation room inside the Hazel Atlas Building received a makeover thanks to the non-profits teaming up once again.

Now, fast forward a month. It is a Saturday. We have 10 of the shelter kids, four staff members,  my son Liam, and me shoveling mulch with a huge group of Junior League women, husbands, boyfriends, and children. All the while, we were dodging a steady stream of raindrops. It was a good thing that most of us were wearing ball caps!

The piles of mulch were well over 15 feet wide, 20 feet long, and 5 feet tall. BOTH OF THEM! Mind you, the city had already used a skid steerer to dump a ton of mulch into the playground area before we even arrived, so both kids and adults were working with wheelbarrows, pitchforks, shovels, rakes, and other implements of destruction to shovel and haul mulch for several hours.

One of the girls from the shelter came up to me and told me she couldn’t have been happier. She explained to me that she finally felt like she belonged and wasn’t the odd one out. I soon discovered that she had been made fun of for a long time because she wore ball caps. On this day, however, this young lady was one in a sea of lovely women who were all wearing ball caps. That day made a difference to her. She finally fit in and realized she was OK and not odd like others had called her. What a difference a day makes.

Also in attendance that day were Kelly Bettem, the Junior League’s president-elect, and Kristen Cox, who serves as the “Done-In-A-Day” (DIAD) Committee co-chair. A year later Bettem and Cox were joined by Katie Hinerman, the other co-chair of the Junior League’s DIAD Committee, in making a phone call. The Junior League of Wheeling wanted to know what the organization could do for Youth Services System, Inc. They explained that the Junior League of Wheeling had an idea: It wanted to do a room makeover for YSS. I guided Cox on a two-day tour of the YSS headquarters inside the Hazel Atlas Building in East Wheeling, and several facilities our organization operates. 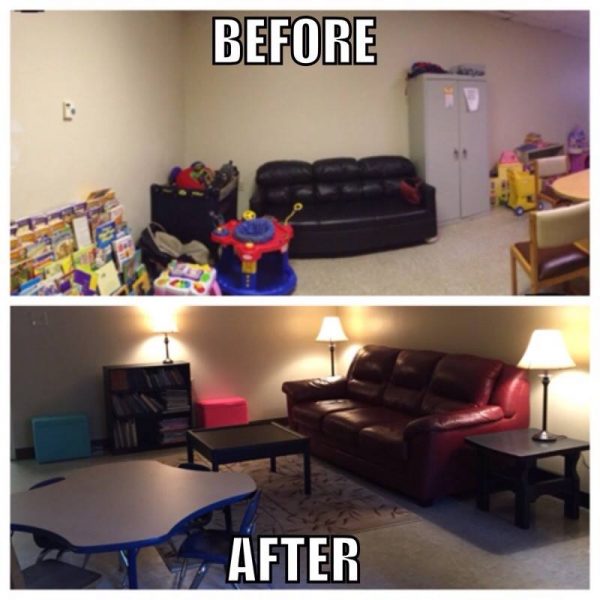 The Junior League selected the visitation room in the central office building as the space it wished to make over.

With paint in hand, Hinerman showed up. Moses met her and they unloaded a truckload of stuff for the next-day project. Paint cans, rollers, drop cloths, and a ladder all were set in place for one day of painting.

Hinerman and Cox arrive at YSS. The Junior League of Wheeling members start rolling in by the car load. Coffee, muffins, and donuts have been delivered by Jon Klug and paint is going up quickly – and neatly.

An hour passes and BOOM! The room has been painted! 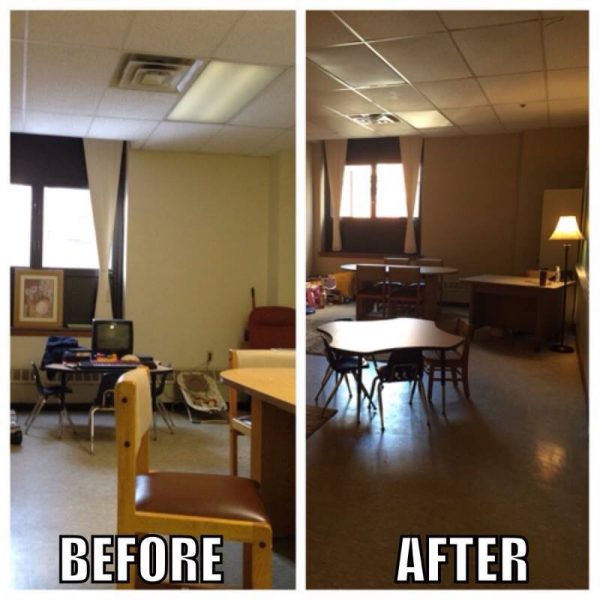 The floor gets a good scrub, the face plates go back on, furniture gets unpacked, and the room was really coming together. Carpet Showcase Flooring Center donated the carpets; Justin and Kristin Nixon-Seibert donated a changing table; Scott Hinerman became the truck hauling service; and the members and families of the Junior League of Wheeling finished their Done-In-A-Day project in just three hours!

Three hours – that’s all it took to make a huge difference. There was plenty of time for the ladies and kids to go home, clean up, and sit down for their family dinner, and they still had plenty of time to attend the “Bugs Bunny at the Symphony” show featuring the Wheeling Symphony Orchestra. Several of us ran into each other during intermission, and we marveled over the project that had been completed, and over the difference the room will make to the kids and families.

We also agreed we all would come together again. This story, you see, will not end here, and that’s because the Junior League of Wheeling is a group that DOES SOMETHING!

From all of us at YSS, we would like to extend an enormous THANK YOU to the ladies of the Junior League of Wheeling. Our two organizations have created a partnership by completing these two community projects, and it is YSS that is now “on the clock.”

Time to do something. 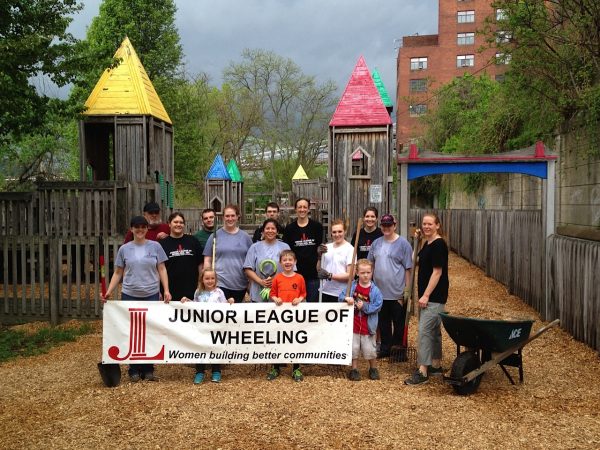 Ladies from Youth Services System and the Junior League of Wheeling joined forces to add mulch to the Altmeyer Playground near Heritage Point.