The Stone Center once housed the Stone & Thomas department store, a retail outlet that offered eight floors full of clothing, sporting goods, men’s and women’s clothing, toys, jewelry, the Tea Room, and much more. Today, Williams Lea is the anchor tenant and Wheeling Jesuit University and Cattrell Construction are in-house, as well.

That is what is accomplished by the more than 300 employees of Williams Lea within the walls of the Stone Center in downtown Wheeling. The company, which opened on Main Street in 2006, announced expansion plans last week to grow into a new 11,250-square-foot area that once housed the furniture department of the Stone & Thomas department store. 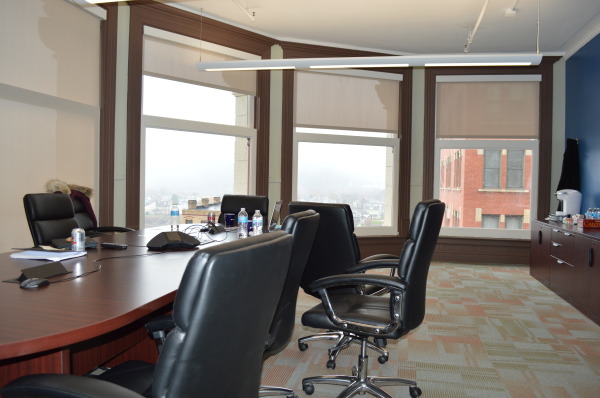 One of many conference rooms and walled-in offices inside the Williams Lea areas within the Stone Center, this one is located in the southwest corner of the building and offers a view of the Ohio River and the Wheeling Suspension Bridge.

By the end of the current calendar year, Williams Lea will employee at least 400 workers, increasing the Stone Center’s employee population to 500 on four of its eight floors.

The Stone Center was purchased in 2005 by the Regional Economic Development Partnership, which is headquartered on Market Street in downtown Wheeling. Each floor features as many as 20,000 square feet of office space. Williams Lea and Cattrell Construction have been tenants from the beginning, and in September 2013, Wheeling Jesuit University opened its physical therapy doctoral program and Care Clinic. 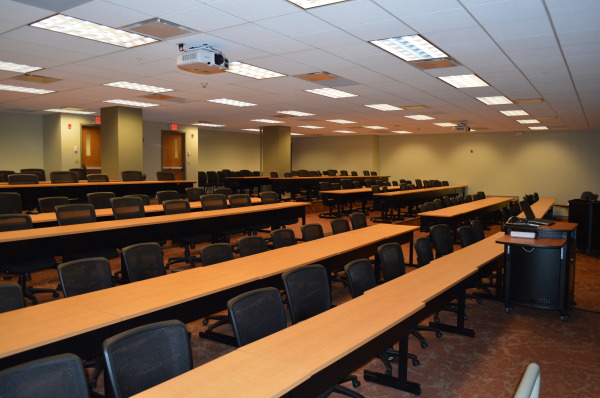 The construction of this basement-level classroom inside the Stone Center required construction crews to dig deeper to allow for the terraced, learning area. The project also involved the removal and replacement of a weight-baring support pillar. 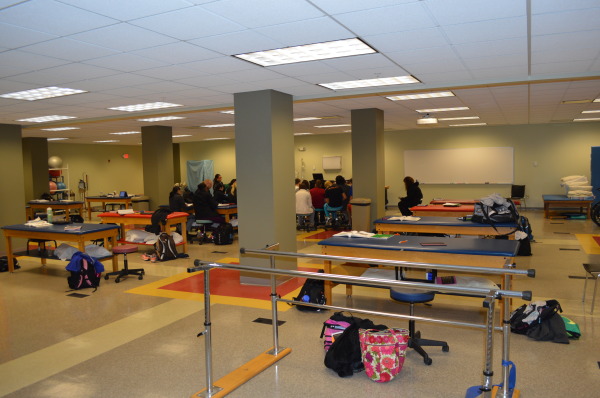 Wheeling Jesuit University moved its physical therapy doctoral program to the Stone Center in September 2013. The university’s Care Clinic is located on the basement level along Market Street, and handicapped parking is currently available within Market Plaza.

“In my career, I have seen a lot of cities that have been devastated by industrial depletion,” he said. “That’s why we’re happy to be here to provide the employment for an area that has lost jobs over the past several decades.

“We have made a significant commitment to delivering exceptional services to our clients across the country and around the globe,” he said. “This expansion demonstrates the increasing demand for Williams Lea and Tag’s services and is a testament to the capabilities of our Wheeling employees and future opportunities for the Wheeling community.”

Krienke explained that the Wheeling operations center has realized, on average, 20 percent growth in new contractual agreements since opening eight years ago. The past year, however, Williams Lea-Wheeling, has experienced a growth rate of 30 percent.

“The increased demand is the result of our clients coming back to us wanting more services, so we have created those services,” he said. “We have done that thanks to technology and our employees.”

In Wheeling, Kreinke said, the average tenure of an employee is longer than three years, and during the past year 43 employees have been promoted within the operation.

“Williams Lea has honored their commitment to the city of Wheeling with their investment in jobs and infrastructure,” said Wheeling Mayor Andy McKenzie. “They provide good jobs with good pay and good benefits. They’ve been a wonderful addition to downtown Wheeling and the entire Ohio Valley.”

McKenzie cited several current improvement projects taking place within the downtown district, and he cited Williams Lea’s success in Wheeling as one of the reasons they are taking place. 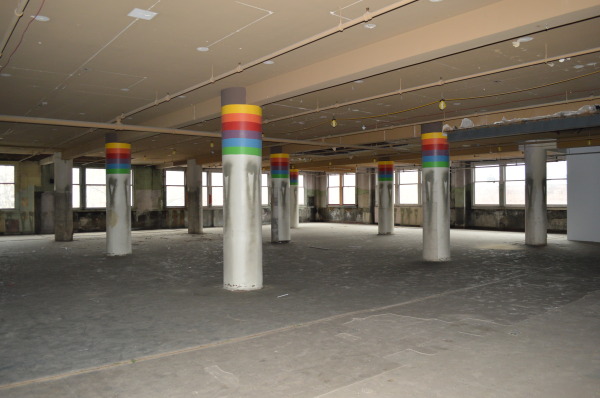 Four of eight floors of the Stone Center are currently occupied, and efforts are consistently made by employees of the Regional Economic Development Partnership to identify potential tenants.

“And the $5.5 million renovation to Wesbanco Arena will take place because of companies like Williams Lea,” the mayor continued. “There’s a new movement in our downtown, and the Stone Center and the work the Regional Economic Development Partnership has done to save this building says a lot about today’s Wheeling and about what’s happening in downtown Wheeling.”

Don Rigby, executive director of the Regional Economic Development, said, “Williams Lea is the best anchor tenant we could have in our Stone Center development project.”