Generations have engaged each other, and many positive developments have occurred, but this does not mean that the work needed to complete the revitalization of Wheeling is finished. Great strides toward this end have been made and are continuing every day. But there is always room for more improvement.

We all have our personal wish lists, and the good news is that people are now listening and considering those wishes. Today, many people in Wheeling possess the following mindset that, “There’s no such thing as a bad idea.”

So, with that in mind, here are a few suggestions I would like to offer. I strongly encourage you to develop your own listing and get it out there.

This past year the Wheeling YWCA expanded the annual event by partnering with the folks who operate the Black Heritage Festival and staging it at Heritage Port. But it was more of an educational opportunity than it was a celebration of the many different cultures currently residing in the Friendly City.

I want food, too.

What speaks heritage louder than food?

While there were a few vendors last year, the offerings were far from “multi-cultural.” Now, if folks wish to represent their heritage, I believe the crowd would be HUGE.

I know we already have a Greek festival and an Italian festival, but does that mean those folks couldn’t contribute to this, as well?

I feel there’s potential here. I feel we are missing an opportunity to celebrate together as a community instead of in separation. And let’s be clear – I am not suggesting a combination of events in any way. I want that Greek festival to continue, and I need the Italian festival to do the same.

But imagine the chance to eat killer pasta and grape leaves, and Indian, Middle Eastern, German, Polish, Irish, Hungarian, Chinese, and Japanese all on the same day! 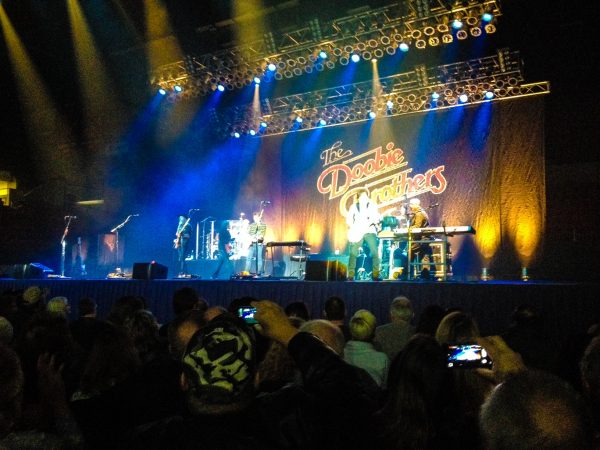 The Doobie Brothers played Wesbanco Arena last February, and they are expected to return to Wheeling in 2015.

Risk Capital included in the budget for the Wheeling Sports and Entertainment Authority:

Denny Magruder and Doug Campbell do what they can do, but the acts that entertain us inside the walls of the Capitol Theatre and Wesbanco Arena are acts that rent the venues. “Rentals” are shows with “promoters” who call Magruder or Campbell, book the room, pay the fee, and take the chance. If a show does well, the promoter makes money, the performer makes money, and the Authority picks up cash for the rental the sales of concessions.

If a performance does not attract many ticket buyers, the Authority still banks the rental fee.

I would like to see Magruder and Campbell get stoked with some risk capital – an amount of money they could use to bring in acts they believe will work in Wheeling. Magruder has been the GM for nearly 30 years, and Campbell has been his assistant for more than 20. These gentlemen are most familiar with the kinds of events that sell and do not sell well in this market, and if they were awarded some working room, I believe we would see our wish for improved scheduling become a reality. 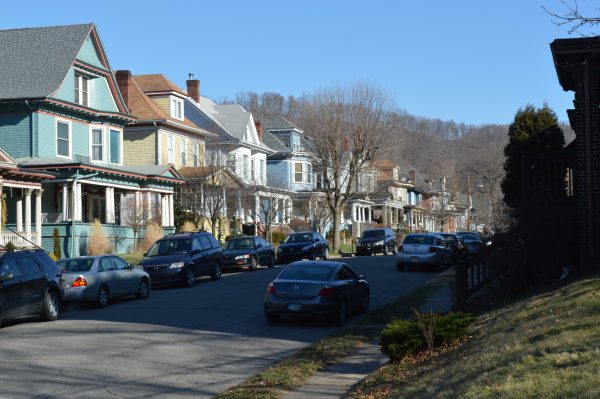 Thousands of Wheeling resident are above the age of 65, and many of them need assistance with house maintenance, sidewalk shoveling and lawn care.

Woodsdale is my native neighborhood in Wheeling, and I was a paper boy for that area. Delivering the daily news allowed me to get to know most of the folks who lived there, too.

That’s why I know this is an issue in Wheeling, W.Va.

I am also aware we need to accept this truth about our city: Many older Wheeling citizens are now in a very difficult situation in life. Because of the decline in the city’s population, their children no longer live in this area. In many cases, their kids are hundreds of miles away, and that renders them unavailable to help their parents or grandparents with the snow shoveling, the tree trimming, and home maintenance.

PLUS, these older residents are on fixed incomes, so they do not have the kind of cash it takes to pay today’s child today’s price for a shoveled walk. I was lucky to get $5 per walk when I was a hustling kid, but I understand today’s going rate is more than $20 for the average Woodsdale walk.

Snowfall, I believe, would present the residents of the city of Wheeling the opportunity to identify these struggling neighbors, and I have already suggested the city’s Code Enforcement Officer be assigned the duty of noting the unshoveled sidewalks. From this point, the identification process begins, and it’s as easy as visiting the Ohio County Clerk’s Office and checking property deeds.

And at this point, I would like to see the public pick up the ball.

Interested Wheeling residents could register as available to shovel, to cut lawns, to perform some much-needed fix-it jobs, and to address whatever serious issues a resident may have with their residence.

Perhaps this is a task for Jake Dougherty and his the ReInvent Wheeling organization. There could be grants available to help make this effort a reality.

There are a few, but more are needed, especially in the areas of 7/Eleven, DiCarlo’s, and CVS Pharmacy.

People litter. I don’t know why, but they do. If we can get some receptacles in the right areas and regular maintenance for them, it would decrease the number of hot dog and pizza boxes, and candy wrappers that riddle the city’s downtown district.

Picnics within the 1100 block of downtown Wheeling:

My wife and I plan to do it just to do it. I figure it will give passersby something to talk about, and it also will promote the idea.

It’s green space right now, and that means we have a chance to patronize a local eatery, pop a squat, and have a picnic on ground where a picnic has never taken place. No one knows how long this land will be free of new buildings, so we plan to do it – with our pup, Einstein – some afternoon after warming temperatures and dry conditions return.

Hmmm … the decision … the Korean Pork Tacos from the Vagabond Kitchen or the Cuban sandwich from River City, or pizza from Vocelli’s or DiCarlo’s, or burgers from The Bridge Tavern?

A letter-writing campaign concerning the future of flood insurance:

We’ve printed the comments made by Wheeling’s city manager before:

“The way I look at that issue is that the federal government passed legislation because FEMA was in a financial hole. What they have done is placed that burden on the people who live in flood plain areas,” Robert Herron said. “To me, that’s shifting a federal burden onto local governments because not only are citizens going to have to pay more for flood insurance, but it is going to dramatically reduce the property values in those flood plains.

In five years, the values of properties in non-flood-plain areas will decrease, and everyone’s taxes will increase to make up the difference. The Ohio County Board of Education approved an operations budget of nearly $60 million a few months ago, so a reduction in tax collections likely would result in a tax increase.

No one wants that, and it’s real easy to let that be known.

That is a link to U.S. Rep. David McKinley’s office. Use it and request representation. I can tell you the congressman has initiated a conversation with the Federal Emergency Management Agency, but no movement has been reported by the D.C. media in several months.

Wheeling officials have communicated with all of Friendly City’s federal representatives, and Councilman David Miller told me he plans to instigate additional conversations in 2015.

An improved public transit system throughout the Upper Ohio Valley:

The schedules and routes may have made sense 20 years ago, but today?

They need to play again:

Let’s all grow up a little. Let’s put the pride away. Let’s sing, “Kumbaya.”

I’m not trying to insult anyone. I get it. After years and years of hearing, “Let them play football again,” the much larger public school system finally said yes.

And then? Well, the parochial school pulled out.

In late 2014, middle schools in Ohio County suddenly canceled all games against parochial and private schools. That decision has been reversed, though, and it is my hope that a compromise can be discovered so the Maroon Knights and the Patriots can do battle once again.

If the two schools continue to not compete in football, fine, but at least give the students an opportunity to continue their rivalry in other sports.

I graduated from Linsly, so I didn’t get the chance to compete against my friends from Wheeling Park unless it was on the baseball field. Those games were special!

And when Wheeling Central was on the schedule? I still own many memories from each encounter, and I can tell you the score of each game.

These kids know each other, and they want to play each other. They want the bragging rights. It’s fun, and right now these children, and their parents, are getting robbed. 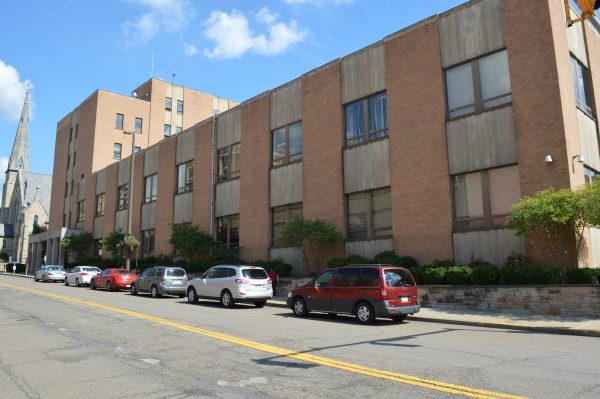 Members of Wheeling Council are willing to discuss ideas and suggestions with Friendly City residents before or after their two regular meetings each month.

A charter review for the government of the city of Wheeling:

He mentioned during his campaign, and he’s reiterated his wish to address the Wheeling’s City Charter, but during Mayor Andy McKenzie’s first six years in the position nothing has been approached.

I believe the Charter needs to be addressed.

The Charter has not been revised since 1992, and the past 22 years have brought a lot of change. Should the city continue to have six wards? Should the elected mayor remain part-time?

Today’s Wheeling deserves to make these kinds of decisions instead of living under the opinions of the past. 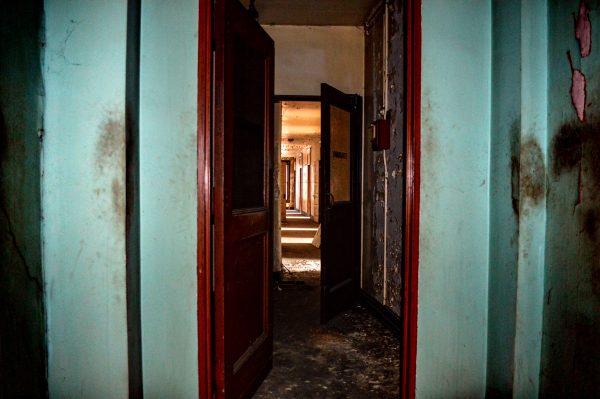 The former Wheeling Hotel is located on three floors above The Bridge Tavern on Main Street.

I’ve been inside many of the buildings in downtown Wheeling, and I have seen a lot of unused space that could be repurposed for housing.

One example is the former Wheeling Hotel. Today, it’s three floors of vacant space above The Bridge Tavern on Main Street. George Dormas, the longtime owner of The Bridge, owns the building and currently has the property up for sale. The total package – the building, the Bridge business, and all of the equipment – is now priced at around $450,000, but he’s also willing to break it down and sell each piece individually.

While I was in the building, I envisioned each floor divided into a pair of apartments with the staircase dividing the units. Vast renovations would be necessary, but it is dry, intact, located next to the 10th Street Parking Garage, and is in close proximity to the Stone Center, the Mull Center, and the Capitol Theatre.

But will it ever take place? It is my hope that it does at this location and in several others in the downtown district. Several structures have the same potential as does the space once known as the Wheeling Hotel.