Ohio County is becoming NCAA Division II’s Tobacco Road.   Wheeling Jesuit University and West Liberty University are not only battling for local bragging rights, but are now competing for pole position in the race for the Elite Eight.  The two teams will play head to head on February 27 at 4pm on the Hilltop, and possibly again in the Mountain East Conference Tournament and/or the Division II Atlantic Region playoffs.

For the fifth week in a row, Wheeling Jesuit men’s basketball team rose up the National Association of Basketball Coaches/Division II rankings. The Cardinals moved to No. 2 in this week’s poll and tied their program’s best national ranking in program history.

WJU increased its NABC national ranking two spot from No. 4 to No. 2. The Cardinals (22-1), the lone one-loss Division II team, received four first-place votes and 388 points. WJU ranks second to only the new No. 1 and previous No. 3 Western Oregon (20-2), which garnered 11 of the 15 first-places votes and 394 points.

The No. 2 WJU ranking ties its highest program ranking from when current head coach Danny Sancomb led the Cardinals during the 1996-97 season.

The Cardinals return to action Thursday night, Feb. 11, in a 7:30 p.m. home contest against UVa-Wise.

The West Liberty University men’s basketball team continued its climb back up the Top 25 ladder on Tuesday when the Black and Gold checked in at No. 3 in this week’s NCAA Division II national coaches’ poll, compiled by the National Association of Basketball Coaches (NABC).

Coach Jim Crutchfield‘s Hilltoppers (20-2) rode a pair of big wins – including an 85-77 road victory before an overflow crowd at then-No. 2 Fairmont State on Thursday – to make the jump from No. 6 in last week’s Top 25.

West Liberty followed up its impressive win against the Falcons by shooting nearly 70 percent from the floor in the second half while pulling away to a 111-99 triumph at Shepherd on Saturday. 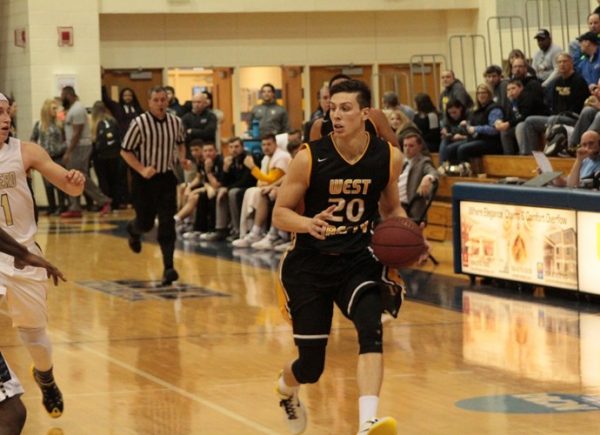 This also marks West Liberty’s 92nd consecutive appearance in the Top 25 poll. That run, which began during the 2009-10 season, is by far the longest in NCAA Division II history.

The Hilltoppers impressive week was more the exception than the rule for the nation’s NCAA Division II elite as five of last week’s top nine teams suffered at least one loss, forcing a major reshuffling at the top of the poll. 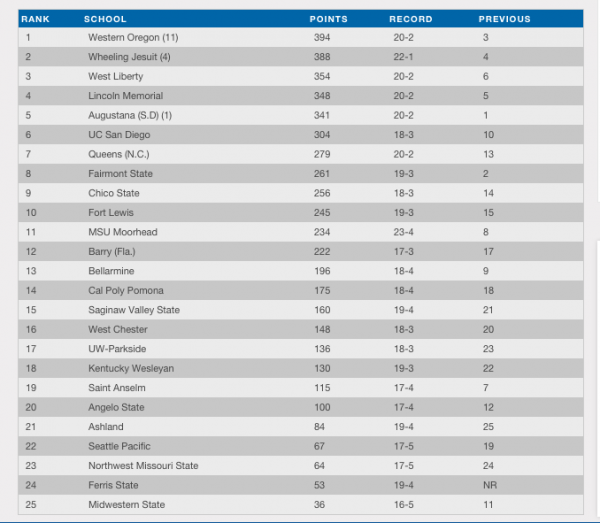