Let me tell you about the latest inductee into the Wheeling Jamboree,Yodeling Dick Brooks. He was introduced as a member on Saturday, March 7, 2015 by Dave Heath, President and main reason we still have a Jamboree in Wheeling. 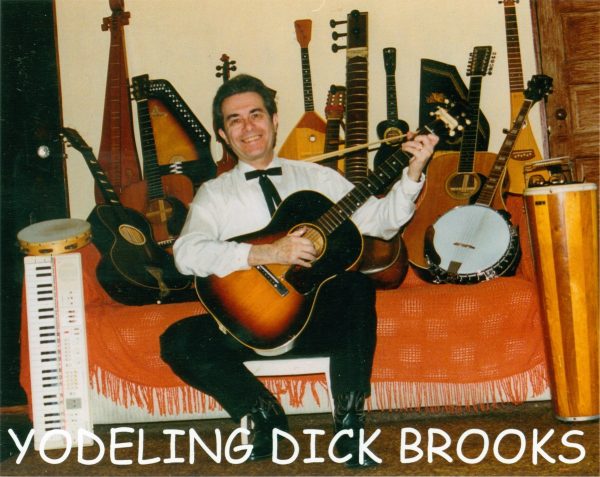 Yodeling Dick with some of his friends

It has sure been a long and twisted road for this country boy born and bred in the Brooklyn borough of New York City. During his set, he started with the first single he ever recorded, The Cat Came Back from 1953. He was either the second or third person to record this song, the first being Yodeling Slim Clark of the Wheeling Jamboree. Yodeling Slim was a big reason why Dick took up yodeling.

As Dick told the story, Roy Acuff had invited him to Nashville to try out for the Grand Ole Opry back in 1955. But it only cost $7.00 to buy a Greyhound bus ticket to Wheeling, so this is where he stopped instead. He tried out for the Wheeling Jamboree but wasn’t hired as a regular.

So he returned to Brooklyn to get more seasoning and to work as a key punch operator for Goldman-Sachs. Since he was at work and not home waiting for his phone to ring, he missed the phone call from the Arthur Godfrey Talent Scout show. No cell phones in those days.

During the turbulent 60’s he temporarily joined the protest movement and recorded an album under his own name of Richard Bruce Morriale and with his lovely wife Janet called Philosophical Songs of Brotherhood and Spirituality. Eventually he came to his senses and got back to country.

Fast forward to 1988 and Dick, Janet and Dick’s mother, Susan, decided to get out of the big city and try another part of the country. They had lived in an apartment all of their lives, but Dick had fondly remembered his first time in Wheeling. So they all moved to Wheeling and bought a 2 story Victorian in the Warwood section of town.

Dick made it back on the stage of the Jamboree at the Capitol Music Hall when Marty Stuart saw him performing in a local pub and invited him onstage. Then one day Dick was performing at the Ohio County Public Library for their Lunch with Books program and the newspaper headline of Yodeling Dick Singing made it all the way out to the Jay Leno Show in Hollywood.

The Lunch with Books program is where I met Dick about 10 years ago. I went to see Roger Hoard and his finger-picking style of guitar playing when I noticed this strange older man video-taping the show. After the show was over I went over and introduced myself to the one and only Yodeling Dick Brooks. He still tapes every show that the library has using an old VHS camera plugged into a wall outlet. Then he takes the tapes home to his attic and transfers them to DVDs. He gives the finished product back to the library for their archives.

I’m helping him slowly to get into the digital age. He finally has some computers, but no internet yet. He has a website, www.YodelingDick.com, thanks to Dave Heath and can be found on YouTube under the name Yodeling Dick Brooks. I have had correspondence with fans in Scotland and other far-flung places about Dick. I found both of his records selling on eBay for good money at one time. He’s been discovered by some of the online independent radio stations.

I had friended the Wheeling Jamboree on Facebook to keep up with what was happening and about 2 years ago, Dave Heath posted that he needed someone to run the video camera to record the live Jamboree shows. I passed the contact information on to Dick, he called Dave, and he started running the camera the following Saturday. This is not one of those sit-down and relax jobs. He has to stand up on a wooden box and straddle the legs of the tripod and make sure the picture is coming out perfect. At least he doesn’t have to use VHS tapes anymore, at least for this. He still uses them at the library.

Dick started feeding Dave some of his own DVD’s and Dave liked that he was the genuine article, so about six months later, Dick got back on the stage of the Jamboree.

He celebrated his 80th birthday about 3 months ago by being the opening act on the Jamboree for Ronnie McDowell.

So after 60 years, his dream is finally fulfilled.

The induction show for new members of the Wheeling Jamboree will be held in October. 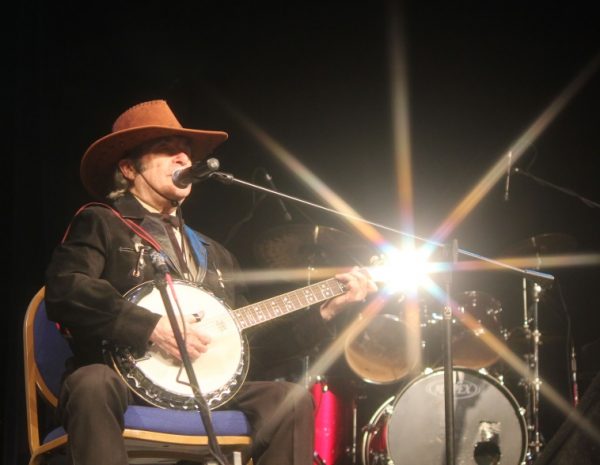 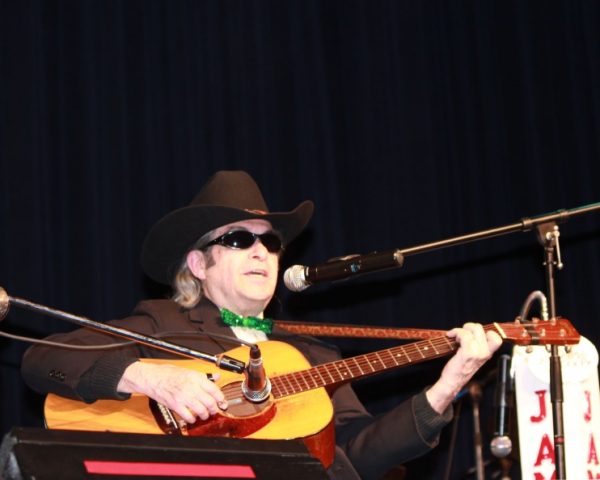