The Wheeling Arts and Cultural Commission wants downtown businesses to dress their buildings in holiday style — in time for the city’s Winter on the Plaza inaugural event on Wednesday, Nov. 20.

“We want as many downtown storefronts lit up as possible,” said Betsy Sweeny, a member of the city’s Arts and Cultural Commission that is hosting a Downtown Storefront Decorating Contest.

She explained that the idea was sparked by Wheeling Heritage Helpers, a group of volunteers who take on city spruce-up projects. Heritage Helpers, headed up by Ellen Gano, wanted to decorate the former Kaufman’s building on Main Street. They came to the Arts and Cultural Commission for some “esthetic guidance,” and then the commission decided to expand on their idea 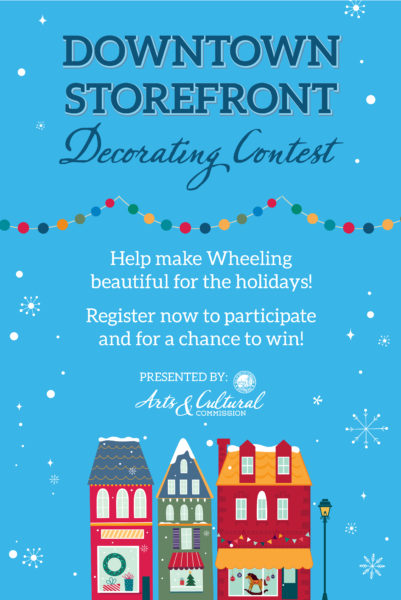 “Hopefully, if your neighbors are decorating their storefront, that kind of encourages you to step up the game. So we decided to make it a campaign and host the contest,” Sweeny said. The visual arts subcommittee of the Arts and Cultural Commission is spearheading the contest.

“We didn’t make it a window decorating contest … there’s plenty of storefronts that are awesome and can decorate that don’t have traditional windows,” Sweeny noted.

“We wanted to get as many buildings as possible lit up in downtown because we have so many new holiday things that are happening.”

The committee wants buildings to remain lit and cheerful to draw people downtown, likes holiday seasons from the past, Sweeny said.

Those interested in participating in the contest should complete an entry form by 5 p.m. on Monday, Nov. 18. The form is available here, or a paper entry can be picked up at the Wheeling Heritage offices, located on the third floor of the Artisan Center, 1400 Main St.

Displays need to be ready for Winter on the Plaza on Wednesday, Nov. 20, at the Plaza on Market — one of the new holiday happenings this year.

Public voting for the most festive display will take place between Nov. 20 and Dec. 18, with the winner to be announced on Dec. 20. A map noting all registered businesses will be made available to the public for online voting or voting in person at the Wheeling Heritage offices. The winner will receive a trophy, ceremonial photo and press announcement.

“We hope to see it become something that is expected and well-known, and every year businesses are kind of gunning for that honor that they can display [the trophy] for the next year,” Sweeny said.

Questions can be directed to the Arts & Cultural Commission at arts@wheelingwv.gov.

WINTER ON THE PLAZA

An idea that was conceived a few years ago has come to fruition in the form of Winter on the Plaza, a tree-lighting ceremony and much more from 5-7 p.m. Wednesday, Nov. 20.

“We will be lig

hting a holiday tree. There will be music, vendors, activities for kids, and Santa Claus himself will be making an appearance,” said Michele Rejonis, marketing and community specialist for the City of Wheeling.

“We opted to hold this event mid-week so the tree and the Plaza will be lit for the annual [Main Street Bank] Fantasy in Lights parade slated for Nov. 22,” she added.

Triadelphia Middle School Strings will perform at 5:30 p.m. At 5:55, officials from the City of Wheeling will offer a welcome, and Santa’s arrival and the tree lighting are scheduled for 6 p.m. The St. Michael’s Bell Choir will perform at 6:30 p.m. Kids can get their photos taken with Santa from 6:30-7 p.m.

The Mountain State Camper, complete with props and decorated for the holiday season, will also be onsite so those attending the event can commemorate the occasion with photos free of charge. The camper and pictures are compliments of Wheeling 250.

Those wishing to participate as a vendor should contact the City Clerk’s office at 304-234-6401.

“It would be wonderful if this becomes an annual tradition in the city. The Plaza on Market is really starting to develop, and it makes sense as a venue for this event,” Joelle Moray, a member of the event ad hoc committee and external affairs manager for AEP.

“The Plaza on Market is a great location for events like this, and we are excited to bring these activities to our downtown. We hope folks come out and enjoy some winter fun with us as we kick off the holiday season,” Rejonis said.

Public use of the Plaza on Market is possible. To check date availability and/or to book the space, interested parties should contact the City Manager’s office at 304-234-3617.

Small Business Saturday is set for Saturday, Nov. 30. New this year will be a synthetic ice rink to be set up from 3-8 p.m. on the Plaza on Market. Skating is free of charge, and ice skates will be available for use.

The Victorian Old Town Association is holding a “Best-Decorated Front Door” contest this year. Last year, they hosted a contest for best-decorated building.

Many doors were decorated in Victorian Old Town last year. This year, the focus of the neighborhood’s holiday decorating contest is on front doors. (Photos courtesy of Ben Seidler)

Lisa Singer, president of VOTA and 20-year resident of Victorian Old Town, said that the neighborhood will also continue an initiative that was started last year asking all homes to place battery-operated candles in their windows.

Almost every window on Main Street was lit with candles, Singer noted. Volunteers purchased candles to be placed in any vacant buildings, as well.

“It was really quite beautiful,” she said.

Buildings will be lit in the area of Victorian Old Town from Dec. 1 through New Year’s Day.

Christmas caroling and a neighborhood Christmas party are also planned in the area, Singer said.

WHEELING 250 in the SPIRIT

Wheeling 250 is inviting all Wheeling residents to light the windows of their homes to complement the downtown business decorating contest, said Jay Frey, chair of Wheeling 250.

“The inspiration for residential window lighting comes from the Victorian Old Town Association’s effort last year. Its genesis was separate but coincidental to the window decoration contest for businesses. The Wheeling 250 Committee wants to offer an inexpensive, impactful way of demonstrating community pride that adds to the holiday look in Wheeling and to complement the Festival of Lights. The invitation to participate is being extended through neighborhood associations and the Council Wards,” said Frey. 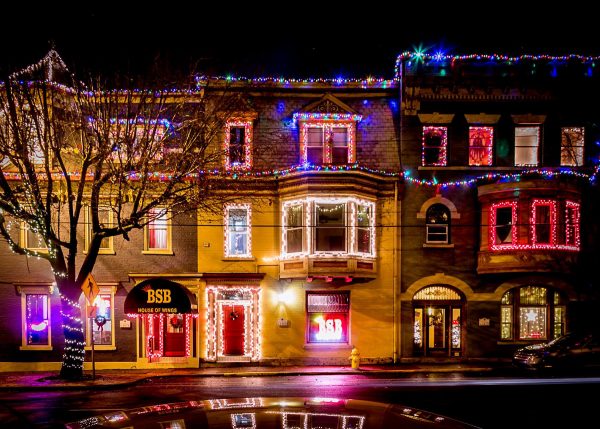 • Having spent nearly 38 years as reporter, bureau chief, lifestyles editor and managing editor at The Times Leader, and design editor at The Intelligencer and Wheeling News-Register, Phyllis Sigal now serves as Weelunk’s managing editor. She lives in Wheeling with her husband Bruce Wheeler. Along with their two children, son-in-law and two grandchildren, food, wine, travel, theater and music are close to their hearts.