You had to know where it was to navigate the way there that very first time because it’s located some distance away from the first turn off of U.S. Route 40. A sharp right, a loop to the left, and then a few swerves and curves before you come to the only fork in Roney’s Point Road.

And you still recall driving nervously up that slender right lane, and you immediately noticed the aligned trees; you told everyone about the matching saplings when you admitted you went there and survived the visit; and when you finally thought about the trip, you wondered why the spirits didn’t bother with you after you had heard they spooked so many others.

Roney’s Point is an unincorporated town just north of Valley Grove and just a few miles away from the Pennsylvania border, and at the time when tuberculosis raged across the United States, local and state governments reacted by building secluded treatment facilities because of how contagious the disease proved to be. Those who suffered from TB coughed their days away, and those patients knew that once blood appeared in the respiratory discharge, suffocation was not far off. 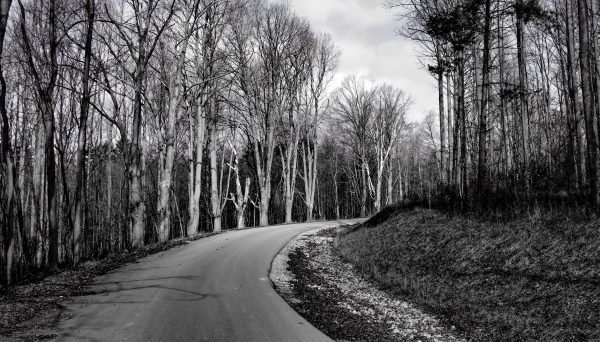 The aligned trees have spooked visitors as soon as they started up County Farm Road.

Once a cure for tuberculosis was developed, the focus of such medical sanctuaries transitioned to mental illness, an epidemic that otherwise shuttered away sufferers to basements, to the streets and homeless shelters, and eventually to their graves. There is an unmarked cemetery just over the hilltop where this hospital was constructed in 1936, and Ohio County records reveal the burial ground was used for many local residents, some who passed from the breathing disease or because they chose to take themselves into the afterlife. Most, according to the gravesite ledger, have names attached, but many do not.

The hospital held 40 beds in two rooms and boasted a long front porch far from anyone who could hear the hacking of lung fluid and the howling screams of those suffering without realizing they were ill. The two community patient rooms were located on the east and west ends and offices, a few private patient rooms, and the operating and recovery areas were on the first floor, and in the basement were the boiler and laundry rooms, storage areas, and the cages, too, for those patients too unruly even for an insane asylum.

When I visited recently, I climbed through a window to gain access, and Olivia Litman ventured in, too, because she and her family resided in the nurses’ quarters for eight years before she was a sophomore at Wheeling Park High School. It was her playground when she was young, and although the family experienced the unexplainable, Litman insists even today that Roney’s Point was a good home. Ohio County Commissioner Orphy Klempa accompanied us, too, because he’d heard the stories but had never been inside. Klempa even brought the ladder. 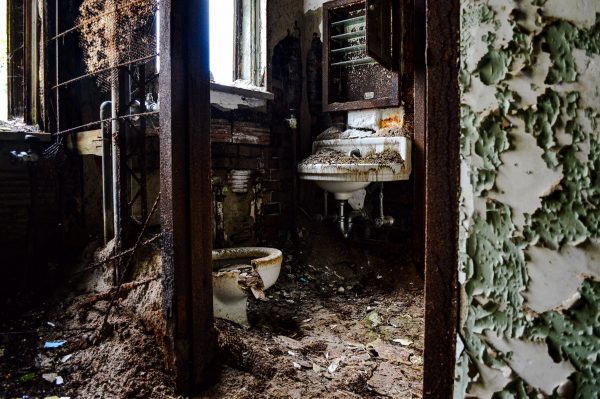 The decay has turned the former asylum into a most dangerous place.

What we saw made Olivia sad because of the trash left behind, the damaged caused by vandals, and the decay that is rotting away the former facility. Klempa, a veteran carpenter, viewed a great expense for the Ohio County Commission if demolition is ever scheduled. The former asylum and the nearby Schmulbach Mansion are dangerous destinations with falling plaster and bricks, unstable flooring, and broken glass scattered through both buildings, and that is why “No Trespassing” signs have been posted on both structures and on numerous trees throughout the acreage that once was the county’s poor farm.

Weelunk has published a pair of stories about the legends involved with the history of Roney’s Point, one that focused on the true history of the facility and another that allowed our readers to return to the interior of this legendary “dare” destination in Ohio County. We have now collected all of that history and captured it for our first venture into video production, and thanks to Tim Pierce and Andrew Ferguson of Pierce Media, marketing specialist Tina Morris, journalist Sherrie Dunlevy, Commissioner Klempa, educator Ryan Stanton, and Ohio County Magistrate Charlie Murphy, we are able to offer an insider’s view in a way never presented before in the Upper Ohio Valley.

So on Thanksgiving Eve, Weelunk will stage the company’s first-ever video screening at Oglebay Institute’s Towngate Theatre near Centre Market. The doors will open at 6:30 p.m., and there is no cost for admission. Seating inside the theatre will be on a first-come basis until the venue’s 166 chairs are filled, and beer, wine, soda, and snacks will be on sale prior to the screening. 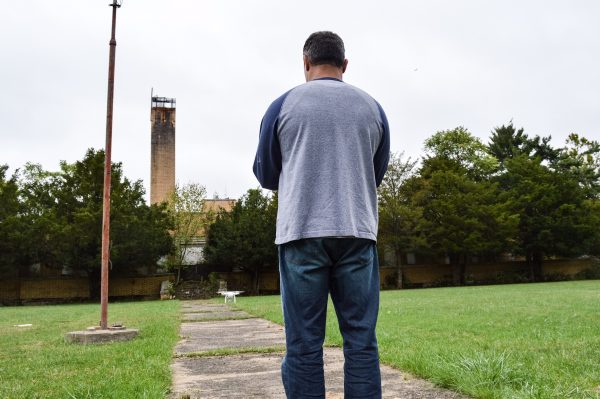 Tim Pierce of Pierce Media operates the drone camera during the production of the video.

Following the 20-minute video, a reception will take place in the theatre’s social room on the first level with free appetizers for all those who attend the event. Towngate’s concession stand will re-open following the show, as well.

Financial consultant Peter Holloway of Hazlett Burt & Watson is the primary sponsor of “The History of Roney’s Point,” and the Wheeling Convention & Visitors Bureau offered its support as well.